After being partially dismounted and taken from the Palace of Versailles to the workshops in the Center for research and restoration of french museums, the famous Passemant astronomical clock entered the first phase of an exceptional restoration involving two years of work, around 10 specialised restorers and a scientific committee composed of the most eminent experts in each discipline. This fundamental restoration, made possible by the patronage of Rolex France, is a world’s first on a clock of this type and of this importance.

An artistic and scientific masterpiece

The clock, which was designed by the mechanical engineer Claude-Siméon Passemant, took nearly 30 years’ to build. The construction of the mechanism was entrusted to the clockmaker Louis Dauthiau and the creation of the cabinet in gilt bronze – a masterpiece of rococo art – to Jacques Caffieri. After being examined and approved by the French Royal Academy of Science in 1749 and installed in the Palace of Versailles in 1754, the clock was immediately recognised as an extraordinary item.

THE rESTOrATION OF THE PASSEMANT CLOCK

From 24 March 2022, under the management of a multidisciplinary scientific committee composed of the most eminent specialists, the Passemant clock will undergo an examination followed by a full restoration of its gilt bronze case – a masterpiece of Rococo art – and its astronomical clock mechanism.

The Passemant clock’s impressive case, which is made entirely of various metals (chased and gilt bronze, enamel, brass, steel, copper, painted metal), was created by the king’s sculptors, metal chasers and smelters: Jacques Caffieri and his son Philippe II. Today, though, it is largely encrusted with dust and grime. The bronzes have taken on a uniform brown hue, masking the relief effects produced by the matt and burnished tones.

The clock’s mechanism is so worn and grimy that many of its indications are malfunctioning and risk causing a gradual deterioration of the whole. The Passemant clock is also the only clock in the Palace whose chime no longer works. For the first time in the modern age, the mechanism will be entirely dismounted, cleaned, analysed and then restored.

On conclusion of this one-of-a-kind restauration, the clock will have regained its shine and once again be able to work as it did in Louis XV’s time.

rOLEX, patron OF THE rESTOrATION

Perpetuating culture
Rolex is an integrated and independent Swiss watch manufacture. Headquartered in Geneva, the brand is recognized the world over for its expertise and the quality of its products – symbols of excellence, elegance and prestige. Its constant striving for excellence translates to an unwavering attachment to longevity, beauty and inventiveness.

This philosophy is reflected in its long-standing commitment to the arts and culture through partnerships with artists, cultural institutions and outstanding performances. This is why, for over 40 years, Rolex has been committed to perpetuating culture. Whether in architecture, cinema, literature and music, or others forms of creativity, Rolex is moving quietly in the background.

The word “Perpetual” is inscribed on every Rolex Oyster watch. But more than just a word on a dial, it is a philosophy that embodies the company’s vision and values. Hans Wilsdorf, the founder of the company, instilled a notion of perpetual excellence that would drive the company forward. Inspired by its watches, which are built to last, Rolex has made a long-term commitment for future generations.

Driven by this determination to contribute to help preserve and pass a unique cultural heritage deeply rooted in history, Rolex France, which patronized the restoration of the King’s Private Chamber, is delighted to be undertaking a second patronage initiative with the Palace of Versailles for the restoration of the Passemant clock. 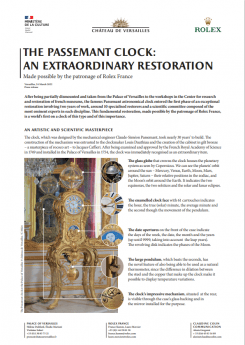 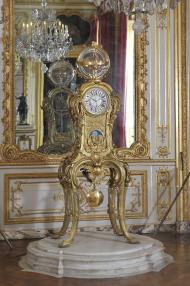 The Passemant clock at the Palace of Versailles

The glass globe and it's planetary system 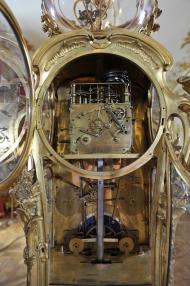 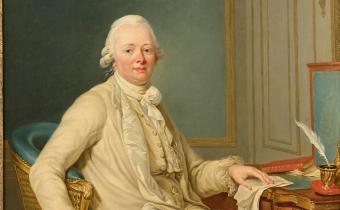 The Palace of Versailles acquires portrait of the Duke of Choiseul

The Palace of Versailles acquired a portrait by Adélaïde Labille-Guiard depicting a minister to Louis XV. 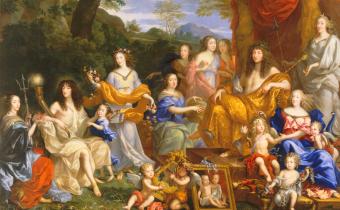 The Palace of Versailles began a major restoration campaign for Jean Nocret’s painting, The Royal Family in Olympus. 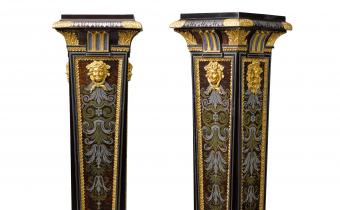 The Palace of Versailles pre-empts two scabellons created by André-Charles Boulle and a table by Adam Weisweiler.