The Queen’s Hamlet in the Trianon Gardens is an idyllic place for a stroll in Trianon. It was composed of ten small buildings with a rustic appearance and set around a lake. The Queen’s Hamlet does not belong to any particular style, combining as it does various influences from rural architecture, but it does succeed in creating a sense of aesthetic coherency.

Welcome to the Queen's Hamlet, a place that is symbolic of Queen Marie-Antoinette, who enjoyed retreating to the Estate of Trianon, far from the Court of Versailles.

In 1783, at the age of 27, the Queen ordered the Hamlet to be built by architect Richard Mique. It was to be a village surrounding a lake, designed as a return to nature, which was very fashionable at the time. This type of idyllic village can be found in the grounds of many castles in Europe, but the scale of the village at Versailles made it uniquely famous.

The Hamlet was composed of ten buildings, small, rustic-looking houses inspired by architectural drawings by painter Hubert Robert. Some of the buildings contain highly sophisticated interior décor, while others are devoted to agricultural pursuits.

After the revolution, the Hamlet was restored by Napoleon I in 1810. The emperor gifted it to his second wife, Marie-Louise of Austria, Marie-Antoinette’s niece!

The Barn and the Working Dairy

Only the foundations of the barn and the working dairy remain. When Napoleon I decided to renovate the Hamlet in 1810, the two buildings were too damaged to be restored and were destroyed. The materials were used to restore the other buildings. The barn had two accommodation units, one of them for the head gardener, Monsieur Bréval. The working dairy was fitted with the necessary equipment for processing dairy products, and a reservoir supplied several buildings in the Hamlet with running water, which was a real novelty at the time.

In 1783, Queen Marie-Antoinette decided to extend the northern part of the Trianon gardens. She commissioned the architect Richard Mique to build the Hamlet, a little village set around a lake. It was composed of ten small buildings with a rustic appearance and took inspiration from picturesque architectural drawings by the painter Hubert Robert. This was in line with the idea of going back to nature, a popular trend at the end of the 18thcentury.

The central part of the Hamlet was reserved for the Queen’s personal use. Three buildings make up this part: the Warming Room, the Boudoir and the Queen’s House, the most imposing building in the Hamlet. The latter is in fact composed of two separate houses connected by a covered walkway. On the right is the queen’s house and on the left, the games house. The rustic exterior of the houses contrasts with the refinement of the interior decoration.

The mill, dovecote, guard house, barn, working dairy, model dairy, Marlborough tower and farm were used for agricultural purposes or for service functions. Several people lived here, including the head gardener and the guard responsible for the Queen’s safety.

The Queen’s House and the stove room

The Queen's House was the central building of the Hamlet. It was reserved for the Queen only and consisted of two distinct buildings linked by a gallery. During her walks around the Hamlet, Marie-Antoinette could stop here to receive her guests or to rest.

Between 2015 and 2018, the Queen's House underwent a major restoration and its interior was completely refurnished. This involved gathering together all of the original objects ordered for the House. As the furniture chosen by Marie-Antoinette was dispersed during the Revolution, that on display in the Queen's House is the furniture ordered for the Empress Marie-Louise, in 1810.

You have the privilege of discovering the Queen's House furnished, as no-one has seen it since the 19th century!

The warming room was not only used for warming dishes from the Petit Trianon. This cottage housed a real kitchen. It was equipped with a bread oven, a fireplace with a spit roast, a cistern, a vegetable garden and a portable stove, all very innovative for the time

Next to the warming room, the boudoir was used by Marie-Antoinette to host her few guests in an elegant indoor setting. White marble, wooden floors and mirrors were witness to the Queen’s private meetings.

The guard house and dovecote

The pigeon house was one of six buildings devoted to agricultural pursuits. The building and its hen house were home to several pairs of pigeons, laying hens, roosters, and chickens chosen especially by the Queen, not forgetting the person who looked after the birds, who lived on the ground floor. Like each building in the Hamlet, the pigeon house had its own vegetable garden. Artichokes, cauliflowers, green beans, black beans and peas were grown in horticultural experiments.

Both by day and by night, the guardian Jean Bersy kept the Queen safe. The guardian’s house was fitted with an underground passageway, allowing the guardian to patrol discreetly. At the end of Marie-Antoinette’s reign, and at a time when her popularity was at its lowest, there was an increasing number of guards to ensure her safety.

The tower in the fisherman’s cottage, named the Marlborough Tower, was used for storing fishing equipment. It was named after a famous song written in 1722 upon the death of the English General Marlborough. This song became famous thanks to the writer Beaumarchais, who made reference to it in his play The Marriage of Figaro. At Versailles, the Dauphin’s nanny, the voluptuous Madame Poitrine, used to sing it, both to please the Dauphin child and for his mother, Marie-Antoinette.

Lien to the song

The model dairy enabled the Queen and her guests to enjoy creams, fromage blanc, butter and other products from the estate produced in the working dairy. In the 18th century many dairies started to appear in aristocratic parks. At the time, the consumption of milk was highly regarded and was praised for its benefits.

The windmill is decorative only and was not designed to grind grain. Like all of the buildings in the Hamlet, the exterior furnishings received special attention, and were carefully painted with a trompe-l’oeil effect.  Here, as throughout the Hamlet, the painting imitates deteriorated joins, chipped coatings, and moss-covered walls. Everything was designed to look as though it is real.

Marie-Antoinette, who loved to get away from the Court of Versailles, was very fond of the Hamlet, a place where she could enjoy walking and hosting small gatherings. The agricultural and horticultural experiments carried out here were also an important part of the royal children’s education.

During the Revolution, the place was left abandoned. The buildings had only ever been short-term constructions, and they soon deteriorated. In 1810, Napoleon I began work to restore the Hamlet. The barn and the working dairy were demolished as they were in an advanced state of disrepair, while the other eight buildings were restored to their former state. Once the Hamlet had been restored, Napoleon I gave it to his second wife, the young Empress Marie-Louise of Austria. This gift was a very symbolic one, as Marie-Louise was herself the great-niece of Marie-Antoinette. 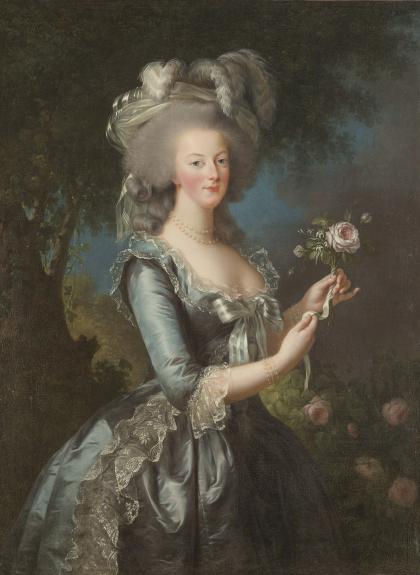 Louis XVI gave the Petit Trianon Estate to Marie-Antoinette in 1774. The young Queen loved to retire here, far from the Court at Versailles, accompanied by her close circle of friends. In the Hamlet, Marie-Antoinette would take walks or relax, sharing the joys of a bucolic life with her children and guests. Everything here was laid out for the Queen’s pleasure, as she received guests in her House, tasted the dairy products from her own model dairy or checked on the work on the Estate farm. 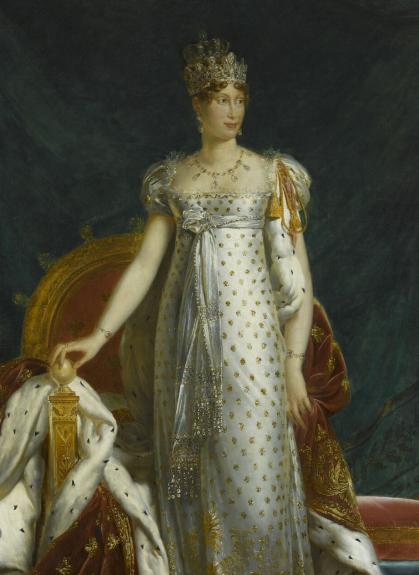 In 1810, Marie-Louise of Austria was married for the first time to Napoleon I at the age of 19. The Emperor undertook the renovation of the Hamlet for her, and a great party was given there in her honour in 1811. Although the Imperial couple did not stay at Trianon very often, the Empress nevertheless appreciated the place. In summer, she could withdraw here to enjoy the quiet of the countryside and spend time on one of her favourite pastimes, which was painting.

Restoration of the Queen’s House

The Queen’s Hamlet is somewhat like a stage set and when it was designed and built it was never expected to last more than a decade or two. The fragile constructions did not stand up well to the ravages of time and a succession of restoration projects have been carried out to maintain them.

The style of Marie-Louise’s furniture and decoration is fairly similar to Marie-Antoinette’s. Both are characterised by great elegance, although there was a stronger emphasis on Antiquity in Marie-Louise’s decoration. The large yellow salon, the centrepiece of the Queen’s House, perfectly illustrates the imperial elegance of the time of Marie-Louise. 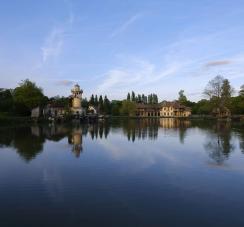