On 20 June 1789, the Royal Tennis Court of Versailles played a major part in French history. From being a royal sports hall during the reign of Louis XIV, it became synonymous with the foundation of French democracy and will be forever linked to a key episode in the French Revolution.

Jeu de paume, an older version of modern-day tennis, was very popular in the 17th century and played an important part in the education of princes. As a royal sport, it was codified with etiquette and rituals. Although the Louvre Palace and the palaces at Vincennes, Fontainebleau, Compiègne and Saint-Germain all had their own tennis court, the Palace of Versailles had been without one since the room built under Louis XIII was destroyed in 1682 to ease the way for the building of the Grand Commun. Four years after Louis XIV and his Court moved to Versailles (in 1686), a new room was built for Nicolas Creté, Tennis Master to the King, a few hundred metres south-east of the Palace in the Old-Versailles district. Although built with private funds, it was frequented by Parisian tennis masters, the Court, and the royal family. According to the memoirs of Charles Perrault, Louis XIV's physician had recommended "jeu de paume" to him as a salutary hygienic exercise.

Nearly one hundred years after its construction, the Royal Tennis Court became symbolic of the brewing French Revolution. On 20 June 1789, the deputies of the Third Estate met there at the time of the Estates General, since the Menus-Plaisirs hotel, their usual meeting place, had been closed by order of the king. On that day, they took an oath not to separate until they had endowed France with a written constitution. This founding scene was immortalised by the painter Jacques-Louis David in a grand fresco, sadly unfinished, called The Tennis Court Oath, which joined the Palace collections in 1921.

The Royal Tennis Court later came to be revered around the first anniversary of 20 June 1789, a decisive date in the history of France and of democracy. In 1790, a bronze plaque bearing the text of the oath was presented to the National Assembly and then taken in a procession to Versailles and put up facing the entrance to the Real Tennis room. Originally a royal sports and entertainment room, it became home to a temple to the memory of the abolition of the monarchy. It was soon neglected, however, and became a national asset in 1793. In the absence of any maintenance, it was closed to the public five years later.

During the 19th century the Royal Tennis Court played a variety of different roles. It served as a theatre storeroom, a workshop and storage space, and a studio for the painters Antoine-Jean Gros and then Horace Vernet. It was listed as a national monument in 1848, then became a games room again under the Second Empire. Approaching the centenary of the oath, under the Third Republic, architect Edmond Guillaume was invited to restore it and convert it into a museum of the French Revolution. The architect used original engravings to reconstitute the spirit of the room, which had been modified and had deteriorated over the course of the century. The museum housed the statue of Bailly, busts of the most important signatories of the oath, and a monumental canvas by Luc-Olivier Merson, based on Jacques-Louis David's preparatory drawing. The museum was inaugurated on 20 June 1883 in the presence of Jules Ferry.

After the celebration of the centenary of the oath in 1889, the room was again forgotten and quickly deteriorated despite regular maintenance. Just before World War II there was even a plan to convert it into a table tennis room for Senate administrators at the Palace. In 1989 the bicentenary of the French Revolution constituted another opportunity to restore the room.

Substantial restoration work has been planned between 2021 and 2022. The restoration project plans to return the room in its 1883 state; the year it was transformed into a museum of the French Revolution. The black cement floor will thus be restored, and the foundation under the decorative frieze and the low wall will regain their Pompeian red colour, in line with the project of the architect Edmond Guillaume.

To mark the occasion of the restoration of the Royal Tennis Court and Luc-Olivier's painting based on the original by Jacques-Louis David, the Palace of Versailles has published an original podcast which retraces the history of the historical work. In 1883, as the centenary of the French Revolution approached, painter Luc-Olivier Merson was chosen by the governmeent of Jules Ferry to restore David's unfinished painting. Although nothing predestined hom ti follow in the footsteps of the 'master' David, Merson thus also went down in Royal Tennis history... 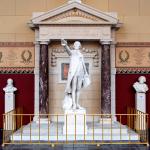