Marly lies 7 km north-west of Versailles, halfway between Versailles and the palace of Saint Germain en Laye, and was Louis XIV’s second great work. The king used it as a residence for leisure and kept access to it restricted to only a few privileged courtiers. Here, Jules Hardouin-Mansart demonstrated his dual talent as an architect and gardener by creating one of the most original works of the 17th century. The palace of Marly was gradually demolished in the early 19th century. The park and other features, such as the drinking pool with its two ponds, still remain today.

The Marly park extends its opening hours on weekends between the end of May and September 2021:

a palace of pleasure and a place of retreat

During the spring of 1679 the Sun King created at Marly a true masterpiece of 17th-century French architecture and garden design. He wanted it to be both a leisure palace and a place to retreat to, to escape the Court.

“In the end the King, tired of grandeur and the crowds, decided that he would sometimes like to have simplicity and solitude.”
Memoires, Duke of Saint-Simon

Lying in a small, closed-in valley, this royal residence could only be seen from inside the grounds. It was hidden in the forest of Marly not far from the eponymous village. The work took more than five years to complete. Louis XIV first visited it in November 1683 and stayed there for the first time in 1686. 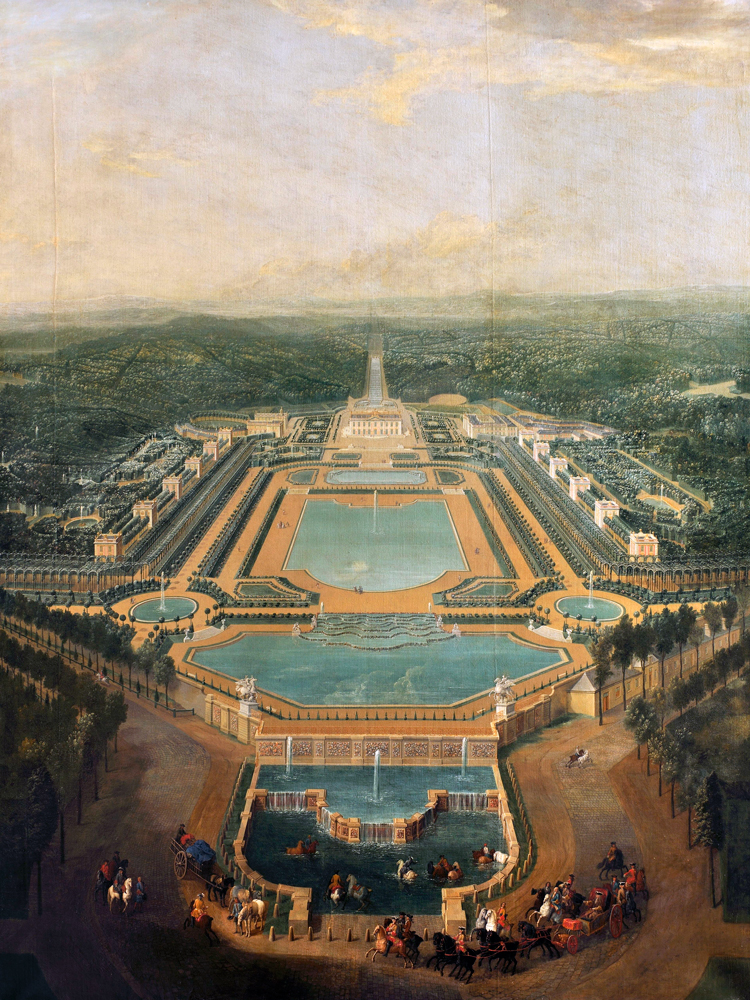 Breaking away from the design of traditional French châteaux, which were positioned between a courtyard and gardens, here the architect Jules Hardouin-Mansart designed a more spread-out layout with multiple pavilions built in line with two major axes of perspective. In the centre there was a large pavilion for the King and his family and beyond, on either side of the water mirror, were 12 smaller pavilions for guests, arranged like the planets around the sun. Four service pavilions were built alongside the royal pavilion, including the guards’ pavilion, the chapel and two other servants’ pavilions. In 1688, baths for the guests were built in one of the pavilions, while in 1703 two other pavilions on either side of the central pool were refurbished to house the Globes by Coronelli. These were removed in 1715, just before the king’s death, and are today conserved in the Bibliothèque nationale de France.

The overall composition of Marly is particularly unusual. It is a synthesis of the Villa La Rotonda by Andrea Palladio in Vicenza, from which it adopts the centralised layout of the royal pavilion, as well as traditional French hunting lodges such as the Chambord keep, and ephemeral architectural design for temporary constructions for parties, used in the creation of the pavilions. Several of the pavilions had already been built at the time of the fireworks set off over the Grand Canal in Versailles, in 1674. Moreover, the façades of the pavilions had flamboyant polychrome decoration painted onto the wall primer in trompe-l’oeil fashion, like party decorations or a theatre set, designed by Charles Le Brun, First Painter to the King. On the blind wall between the two servants’ pavilions the king had a false colonnade painted opening onto a garden, which later inspired the one in the Grand Trianon.

The pavilions are positioned in the middle of the gardens. During the first few years these were rather bare, containing only grassy banks, lines of yew trees and a central pool surrounded by a couple of fountains with minimal water jets. The Sun King subsequently undertook tirelessly to redesign them. In the centre he built parterres and on the east and west sides of the north-south axis he planted groves. The guests’ pavilions were inter-connected with trellis arches and surrounded by alleys lined with yew trees interspersed with other trees pruned in various ways.

Because of its proximity to the Seine, reservoirs and water jets could be installed in Marly using the famous colossal “machine” built on the river, which was a masterpiece of hydraulic engineering at the time. Work started on it in 1682, and water was first pumped in 1685. The plentiful supply of water enabled the king to create waterfalls in Marly, which he had not been able to do in Versailles. These included the “River” (1696-1697), a gigantic waterfall with marble decoration to the south of the royal pavilion, and the “bucolic waterfall” in the East Grove (1701). To the north, beyond the perimeter of the garden, a monumental drinking pool was built (1698-1699) as a symbolic gateway to the bottom of the gardens. The Drinking Pool still exists today.

Besides Jules Hardouin-Mansart and Charles Le Brun, the greatest artists contributed to embellishing the site, and their works can be seen today in the Cour Marly in the Louvre. These notably include the celebrated horses by the Coustou brothers from the Drinking Pool, which replaced the sculptures of Renown and Mercury by their uncle Coysevox in the 18th century, the latter pair being placed at the entrance to the Tuileries. Other iconic Marly decorations included the battle scenes in the King’s pavilion by Van der Meulen and the first French fireplaces topped with a trumeau de glaces by Pierre Le Pautre, heralding the decoration used in French lounges in the 18th century.

The refinement of the water features, buildings and gardens made the locations "the most beautiful place in the world", as described by its contemporaries. 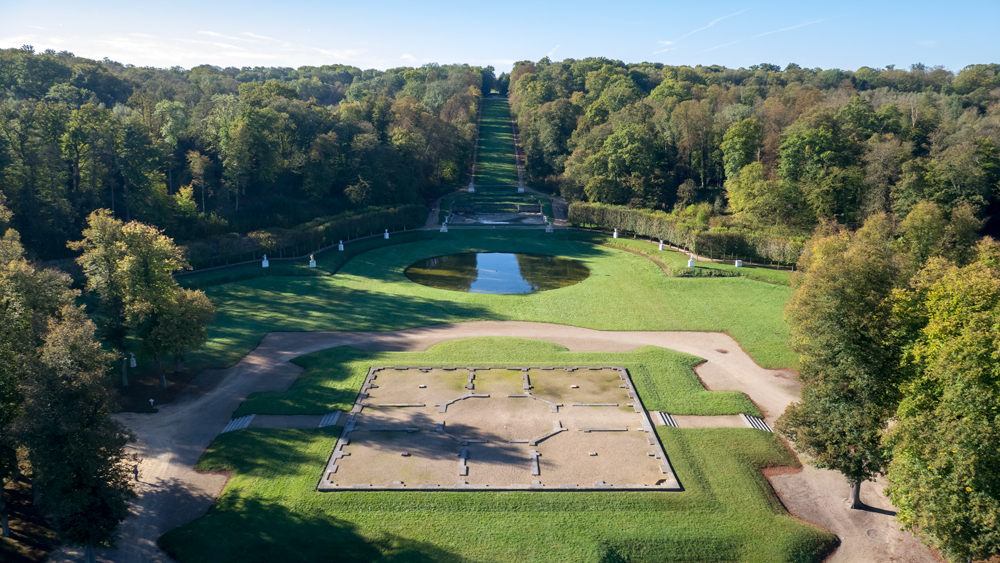 The king, walks and "marlys"

Louis XIV often went to Marly in the afternoons, an outing which enabled him to stroll in the gardens, admire the water features and follow up on the works he had commissioned there.

“He always has little projects on the go in the gardens to amuse himself."
Journal of the Maquis de Dangeau

During the latter years of his reign, the Sun King spent more than a third of the year at Marly.

As well as going for walks, the king used to stay in Marly for several days or weeks. These visits, referred to as “Marlys”, were eagerly requested by the courtiers, who entreated the king with “Sire, Marly”, since admission to the estate could only be granted upon royal invitation. The tradition of “Marlys” continued during the reigns of Louis XV and Louis XVI, but entry to the royal residence was less strictly controlled, to the point that by 1746 all those who asked to go were allowed. A certain loss of interest in Marly later arose due to the creation of numerous other small palaces appreciated by the sovereigns, such as Saint-Hubert, La Muette, Choisy and Bellevue.

As a private residence, etiquette in Marly was less strict: men were allowed to keep their hats on in the presence of the king and women were allowed to wear indoor dresses and town attire. The royal residence was a place for entertainment and relaxation and played host to concerts, balls, masked balls, lotteries, meals, card games and games in the garden thanks to the swing, ramasse (a primitive sort of fairground ride) and several jeu de mails (an early version of golf). Hunting, however, remained the king’s principal occupation at Marly, which he enjoyed in the immense park. 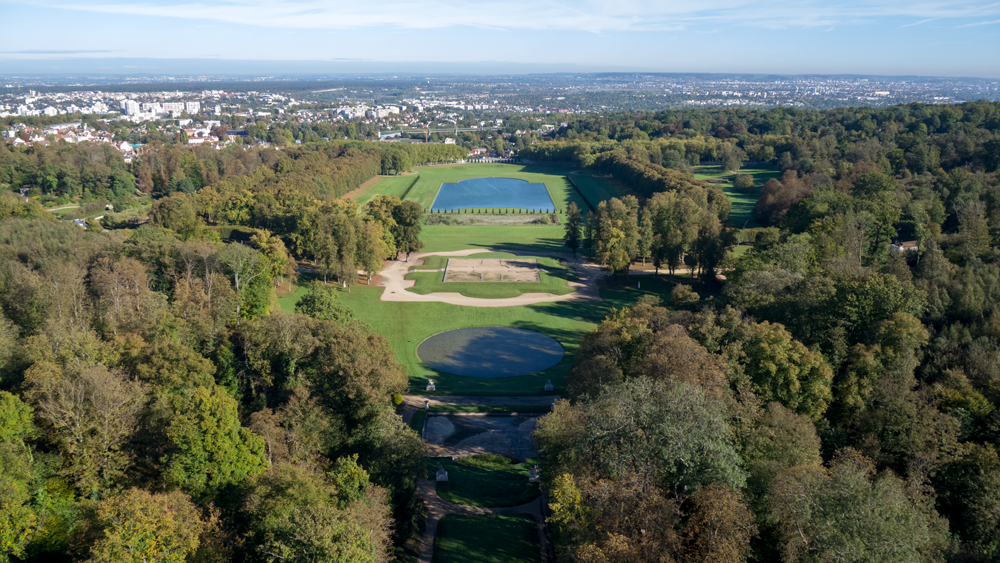 from a royal residence to a national hunting estate

Louis XVI’s last visit to Marly was on 23 June 1789 and the royal residence somehow continued to be maintained until 10 August 1792. Once the monarchy had been abolished the estate was sequestered and furniture not considered to be of national importance was sold. The estate was scoured for metal, the woodwork was cut up and sold, and the sculptures were dispersed. Marly was finally sold in 1799 to a buyer who began demolition work and then sold it on in 1803 to a manufacturer, who built a spinning mill and a sheet factory on the site. In 1805, burdened by debt, the latter tried to sell the estate to Emperor Napoleon I, who turned it down the following year. This marked the end of Marly. The manufacturer decided to extract all he could from what remained of the buildings and gardens of the old Bourbon residence. Demolition work began, leaving Marly just a shadow of what it once was.

The estate was eventually bought by Napoleon in 1811 and it returned to its original purpose as a hunting ground where kings, emperors and presidents of France, from Charles X to François Mitterrand have come to practice the noble sport.