The first 'aerostatic' flight in history was an experiment carried out by the Montgolfier brothers at Versailles in 1783. At long last, man could leave the surface of the earth below.

19 September 1783 is a key date in the history of humanity. Ever since Leonardo da Vinci in the 15th century, men had dreamed of flying through the air. In the Age of Enlightenment, it finally happened. Joseph and Étienne Montgolfier, born in Ardèche in France, began to experiment with lighter-than-air flight in 1782 using a piece of fabric billowed aloft by a fire of wool and damp straw. One of their demonstrations attracted the attention of the Académie Royale des Sciences, which asked them to repeat their experiment in Paris. 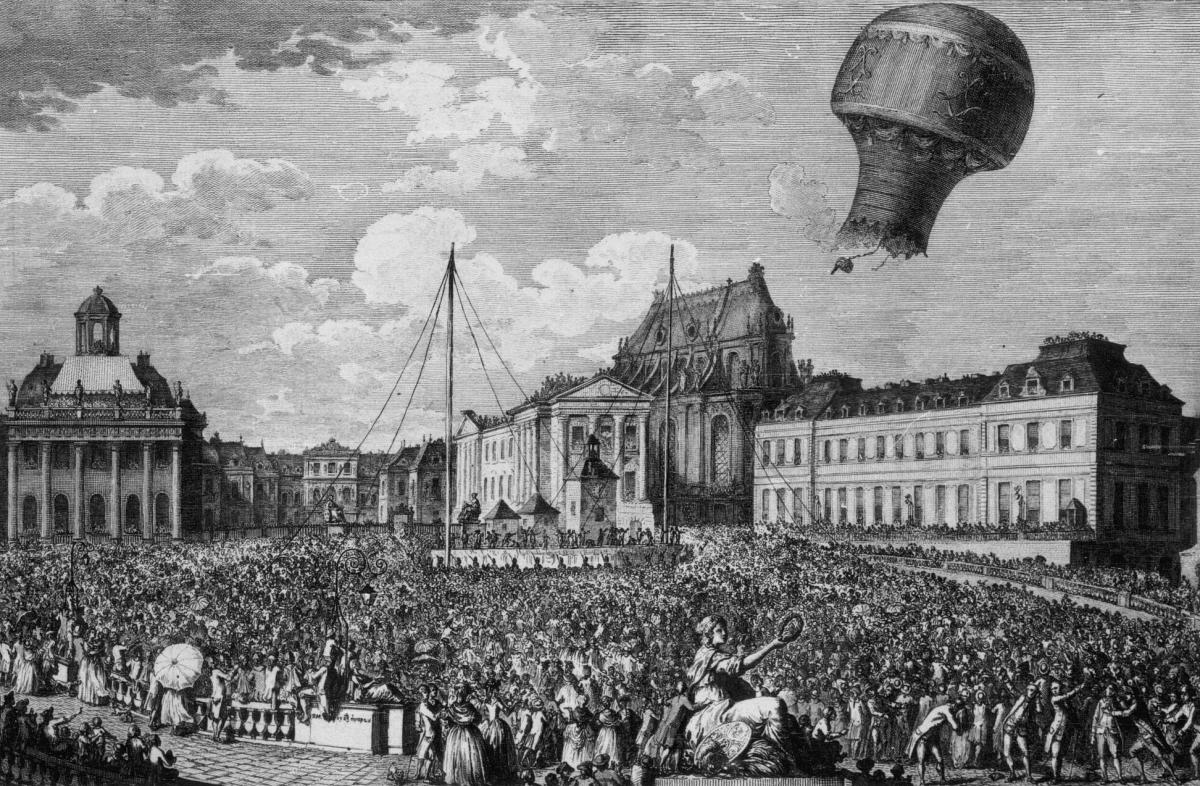 In 1783 Étienne carried out an initial tethered attempt, which was successful and which he repeated a second time seven days before the demonstration in front of the king at Versailles. Unfortunately, the balloon tore open and he had to stitch it back together quickly. The balloon was made of cotton canvas with paper glued onto both sides, measured 18.47m tall by 13.28m wide, and weighed 400 kg. It was named Le Réveillon after Étienne's friend Jean-Baptiste Réveillon, the Director of the Royal Manufacture of printed paper, who had designed a motif on a sky-blue background decorated with the king’s cypher – two interweaving L’s – linked with decorative elements all in gold.

The demonstration was held in front of Louis XVI and the royal family in the palace forecourt, which was packed with curious onlookers. As a precaution, it was decided to use animals for the flight.

At the blast of a cannon, at 1 pm, a sheep, duck and cockerel entered the round wicker basket tied to the balloon by a rope.

At the blast of a cannon, at 1 pm, a sheep, duck and cockerel entered the round wicker basket tied to the balloon by a rope. Eleven minutes later a second cannon shot rang out, heralding the lift-off of the basket. Amidst stupefaction and applause, the balloon left the ground and soared 600 metres into the air. Damaged by a rip in the fabric, it descended slowly eight minutes later after travelling 3.5 km and came back to earth in the Wood of Vaucresson, at the Maréchal crossroads.

Pilâtre de Rozier, a physician and future aeronaut, hurried to collect and examine the animals: they were, not entirely expectedly, alive. The sheep, duck and cockerel were hailed as 'heroes of the air' and, as a reward, were given a place in the Menagerie in Versailles by Louis XVI. The ladder up to the basket was now ready for the first human feet. And so, in front of the Dauphin at Château de La Muette on 21 November, Pilâtre de Rozier became the first man ever to be borne aloft. A new page had been written in the history of mankind.