Louis XIV’s love of women is well-known. Throughout his life, he had a number of mistresses including the Marquise de Montespan and the Duchess of La Vallière, both of whom bore him several legitimated children.

Louis XIV had a real eye for the ladies. His first love, Marie Mancini, was Mazarin’s niece but both the cardinal and Anne of Austria were vehemently opposed to this union, and the brief encounter between the King and the princess on 22 June 1659 was their last before she was banished from the court into exile. The King agreed to marry the Spanish Infanta, Maria Theresa of Austria, on 9 June 1660, in accordance with the Treaty of the Pyrenees, which ended the Franco-Spanish war.

Louis XIV’s first official mistress, Louise de La Vallière, lived at Court from 1661 to 1674. She bore the king four children, two of whom survived and were legitimised: Marie-Anne de Bourbon, known as Mademoiselle de Blois, and Louis, Count of Vermandois.

The Marquise de Montespan was next to succumb to the royal charm, during the Flanders campaign in 1667, and the following year the Great Royal Entertainment at Versailles was unofficially held in her honour. It was not long before she moved into a prestigious apartment that was directly connected to her lover’s. Exquisitely decorated by d’Orbay, it was even more spacious than the Queen’s apartment. The King also gave her Clagny palace, which became the home of the numerous children she had with the king – six legitimate children in all. She was ousted by Mademoiselle de Fontanges, a young beauty barely 20 years old, whose relationship with the King turned out to be only brief.

The governess to Madame de Montespan’s children, Françoise d’Aubigné, who later became Madame de Maintenon in 1675, was next to win the King’s heart with her sweetness and charm. Following the death of Maria Theresa, she married the King of France in secret during the night of 9 to 10 October 1683, in the presence of Louvois and de Bontemps. According to Princess Palatine: “In any case, what is certain is that the King has never been so passionate about any mistress as he is about her [Madame de Maintenon]; it is a rather curious thing to see them together.” 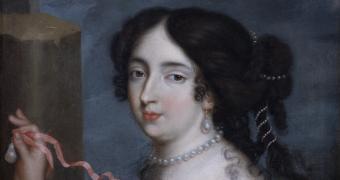 Madame de Maintenon. In the corridors of power

On the tercentenary of her death, Madame de Maintenon, Louis XIV’s secret wife, will return to her apartments in the Palace of Versailles for an exhibition in her honour. 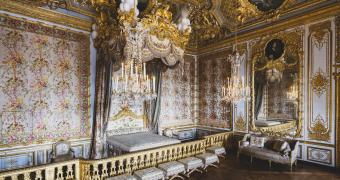 Reopening of the Queen's State Apartment

After more than three years of restoration, the Queen' State Apartement will open its doors to the public from 16th April.