The project to restore the Dauphin’s apartment, which has been made possible thanks to the support of several patrons, is starting in October 2020 for one year.

Work is underway to restore the Dauphin’s apartment, and will go on for the next year. It follows on from the work carried out in 2019 on the Queen’s State Apartments and the Dauphine’s apartment. The aim is to restore the spaces to how they were following their refurbishment in 1750 by Ange-Jacques Gabriel for Louis XV’s eldest son, the Dauphin Louis-Ferdinand.

The Dauphin’s apartment is located on the ground floor in the central section of the Palace and is one of the most prestigious in the former royal residence. It comprises three adjoining rooms – the bedchamber, the Great Chamber and the library – situated below the Hall of Mirrors, the Peace Room and the Queen’s Chamber. Each of its rooms is more majestic and magnificent than the last and the apartment invites visitors into the inner circle of the royal family, while also offering a unique view of the Gardens. However, the rooms and their décor gradually lost their homogeneity over time, due to the many uses to which the rooms were put, the myriad rearrangements and the refurbishments of the 17th and 20th centuries. The aim of the current project is to restore them to how they were in the 1750s.

The Great Chamber is the corner room, located in the centre of the apartment. Its décor was entirely refurbished in 1747 with the assistance of sculptor Jacques Verberckt, who was responsible for the rococo wooden panelling. Only the fireplace and part of the carved panels remain today. It was at the turn of the 19th century, as the Palace of Versailles was being transformed into the museum envisioned by Louis-Philippe, that the room underwent the greatest changes, with most of its décor being replaced. In 1978, the Museums Programme Law initiated the restoration of the Dauphin’s Great Chamber to how it was during the Ancien Régime; this is how we know it today. The current project aims to complete this programme of work, which was left unfinished.


The Dauphin’s Great Chamber is being restored thanks to the patronage of Baron Philippe de Rothschild S.A.

Located next to the Great Chamber, the library began being used as such around 1755-1756. It still retains most of its original layout and rococo-style décor, featuring garlands of flowers, dolphins and illustrations on the subject of the arts (architectural and painting trophies, dancing putti). Multicoloured and created using the French varnish technique (‘vernis Martin’), it is a perfect example of the natural-look painted décors that were popular in the mid-18th century. During the restoration of this private space, particular attention will be paid to the wood panelling, in light of the findings of an extensive study of the painted décor, which confirmed the theory that it had been improperly interpreted during a previous attempt in the 1960s. Moreover, the décor we can see today looks yellowed and distorted. The background will therefore be reworked to restore the porcelain look of the panels.


The library is being restored thanks to the patronage of the Société des Amis de Versailles (Friends of Versailles).

During the restoration of 1747, the Dauphin’s bedchamber was decorated by the great artists of the time, such as Jacques Verberckt, who carved the wood panelling based on designs by Ange-Jacques Gabriel, and Jean-Baptiste Pierre, who did the overdoor paintings (these works are held in the Palace of Versailles collections and will be put back in place once this restoration is complete). The room was completely transformed under Louis-Philippe and part of the décor was replaced with paintings set into the walls. In the 20th century, the wood panelling and gilding were restored, and the fireplace, which was discovered in storage, was replaced. Today, this room is one of the most opulent and best preserved in the princely apartments, and much of its original décor is considered a masterpiece of rococo art. The current project aims to restore the brilliance of the beautifully crafted gilded wood panelling, which is clogged with grime and full of gaps. The restoration will endeavour to clean the existing décors and fill in the gaps, while respecting their original appearance, and then enhance them by repainting the plain ‘blanc de Roi’ backgrounds using standard techniques.


The Palace of Versailles is currently seeking a patron to support the restoration of the Dauphin’s bedchamber – an iconic room in the royal residence. 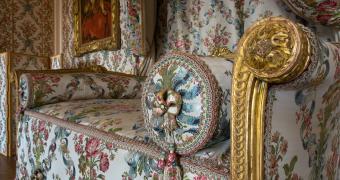 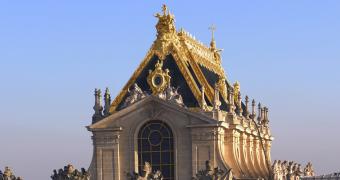