Although held in a more peaceful context than the one put on for the Doge of Genoa, the reception of the ambassadors of King Narai of Siam was intended to push France’s influence aggressively in the East. In his battle against the Dutch, Louis XIV was aiming to win over a new ally.

The sumptuousness of the reception of the ambassadors of Siam was a new sign of the Sun King’s glory. Although he had already defeated Holland, which had been forced to sign the peace treaties of Nijmegen in 1678, Louis XIV remained no less hostile toward Dutch trade. He intended to continue his offensive right up to the Far East, where Holland was still unscathed in matters of commerce.

During the 17th century Siam was the major power in Asia between India and China. Buddhist by tradition, with a refined culture and practicising tolerance towards other religions, the kingdom fascinated Western countries. During the reign of Narai (1657-1688) Western influence increased, and the king sought an ally in Europe. He chose France, which had remained uninvolved in Dutch trade affairs. After an initial unsuccessful embassy to France in 1681, a second was sent in 1684 and was lavishly received by Louis XIV. In turn, the Sun King sent a diplomatic envoy to Siam in March 1685 with a view to establishing trade agreements – and to converting King Narai to Catholicism. Accompanied by Siamese ambassadors, the envoy returned to France in June 1686.

Upon leaving the Medal Cabinet one of the members of the Siamese party declared that, in addition to the three greatnesses that were Man, God and Paradise, he now knew that of Versailles!

Landing in Brest on 18 June, on 1 September 1686 the ambassadors arrived at Versailles, where they were greeted by a crowd of 1,500. The silver furnishings were once again in place, flanking the route to the royal platform. The stakes were high: the military support of Siam was to be won, or lost. Despite suffering from a fistula, Louis XIV received the ambassadors, who brought a box carrying a letter from King Narai. Wearing their striking pointed hats, they bowed before the king as though he were a god. Contrary to their own custom, they were permitted to raise their eyes and look at him. The king invited them to visit his apartments and gardens, and after delivering the letter, the ambassadors withdrew backwards with their hands clasped together. Upon leaving the Medal Cabinet one of the party declared that, in addition to the three greatnesses that were Man, God and Paradise, he now knew that of Versailles!

Unfortunately, the embassy did not have the desired outcome. King Narai was overthrown in 1688 and was replaced by a formidable tyrant, Phetracha, who permanently closed Siam to the West – except for Holland. The fight against the Dutch was far from over. 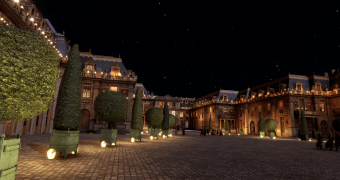