The Town of Arras, Hauts‐de‐France Region and Palace of Versailles are jointly hosting an exhibition this year on the signing of the Treaty of Versailles in 1919, which ended the First World War. To mark the centenary of its signing, Arras Musée des Beaux-Arts is hosting an exhibition from 28 June to 11 November 2019 dedicated to this major historical event of the 20th century.

On 28 June 1919, the Palace of Versailles was buzzing and the Hall of Mirrors was the focus of international attention. As the chosen location for the signing of the peace treaty, the Hall of Mirrors designed by Mansart was once again fulfilling the political purpose intended for it by past kings. Louis XIV was the first to use it for diplomatic ends by welcoming the Doge of Genoa in 1685, the Ambassador of Siam in 1686 and the Ambassador of Persia in 1715; Louis XV followed this example by receiving the Turkish Ambassador there in 1742. This evocation of the signing of the Treaty of Versailles will allow visitors to immerse themselves in the dramatic political events that took place here and get a feel for all the ceremony surrounding them.
The often strained relations between France and Germany are at the heart of the experience and are examined in some detail. Louis XIV's campaigns in Germany, and particularly the sack of the Palatinate in 1688, had a big effect on people at the time, creating resentment that would never leave the German soul. Under the Empire, the victory at Iena and Napoleon’s entry into Berlin in 1806 pushed the humiliation to its peak. The proclamation of the German Empire in the Hall of Mirrors in 1871 might have been the final stage in this complex relationship, but then the First World War arrived to reignite the tensions.

In preparation for the signing ceremony, Palace staff and members of the government worked hard to transform the Hall of Mirrors. The parquet floor was covered with 24 carpets from the Savonnerie Manufactory lent by the Mobilier National and sewn together, edge to edge, by seamstresses. An imposing horseshoe-shaped table was set up in the centre of the Hall. Rows of benches were lined up on either side to accommodate journalists (on the War Room side) and guests (on the Peace Room side). In the centre of the Hall sat the signatories, including Georges Clemenceau, Woodrow Wilson, Sidney Sonnino and David Lloyd George.

Signed on 28 June 1919, the Treaty of Versailles was supposed to end the conflict between France and Germany once and for all. The date and location for the signing were chosen deliberately: 28 June marked five years to the day since the assassination of Archduke Franz Ferdinand of Austria in Sarajevo, while the Hall of Mirrors was where the proclamation of the German Empire had been made, on 18 January 1871. The peace negotiations took place in Paris from January to June 1919 and were highly complicated: the Allies were the only ones involved in the discussions and struggled to find common ground. American Woodrow Wilson envisaged a peaceful world with the League of Nations (from “Wilson’s Fourteen Points”) at the helm, while Italian Vittorio Orlando was only interested in expanding his territory. France, led by Georges Clemenceau, wanted to make Germany pay for the destruction caused by four years of war and to protect itself from any future attempts to grab power. However, British Prime Minister David Lloyd George wanted to see Germany retain its status.

On 17 June 1919, the peace treaty was submitted to the German delegation, led by the Minister for Foreign Affairs, Ulrich von Brockdorff-Rantzau. All Germany’s counterproposals were rejected and the country was forced to concede to the Allies. Brockdorff-Rantzau ultimately resigned rather than sign what he called a “diktat”. He was replaced by Hermann Müller, the new Minister for Foreign Affairs, and Johannes Bell, Minister for Transport, and it is these two who have gone down in history as the two German signatories of the peace treaty.

The session lasted fifty minutes. There was no pomp, no music to celebrate this solemn moment. From 1.45 pm, the signatories from the Allied nations began passing through the Honour Gate in their cars, to a guard of honour provided by the Republican Guard. For the public who had gathered to watch, it was a cavalcade of cars as, one after the other, they deposited their passengers at the foot of the Queen's Staircase to make their way up to the Hall of Mirrors. At 2.10 pm, Clemenceau arrived, to cheers from the crowd. On the other side of the Palace, at the Hôtel des Réservoirs, where the German delegation was staying, Hermann Müller and Johannes Bell got into their car, which took them across the park to the Palace, which they entered via Madame Victoire’s chamber. Waiting for them there was Pierre de Nolhac, Curator of the Palace, who escorted them to the Hall of Mirrors.

“I headed up the small procession, walking through an interminable succession of rooms, to the marble staircase where the Republican Guards formed a guard of honour on the steps. (...) For just a few seconds, this was once again the enemy that we were seeing, the vanquished, and I could see tears forming in the eyes of Hermann Müller, which he was unable to disguise.”

The German signatories entered the Hall via the Peace Room and, in heavy silence, settled at one of the tables. Rarely had the Hall of Mirrors seen so many people sitting within its walls. At Clemenceau’s invitation, Müller and Bell were the first to sign the peace treaty. Thereafter, each delegation approached the desk to sign. At 3.55 pm, the final signatory returned to his seat.

After the ceremony, the German delegation left the Palace through the gardens, watched by the crowd that had taken over the Water Parterre. It was followed by the “big four” – Clemenceau, Wilson, Sonnino and Lloyd George – who emerged into the gardens to the cheering of the crowd. 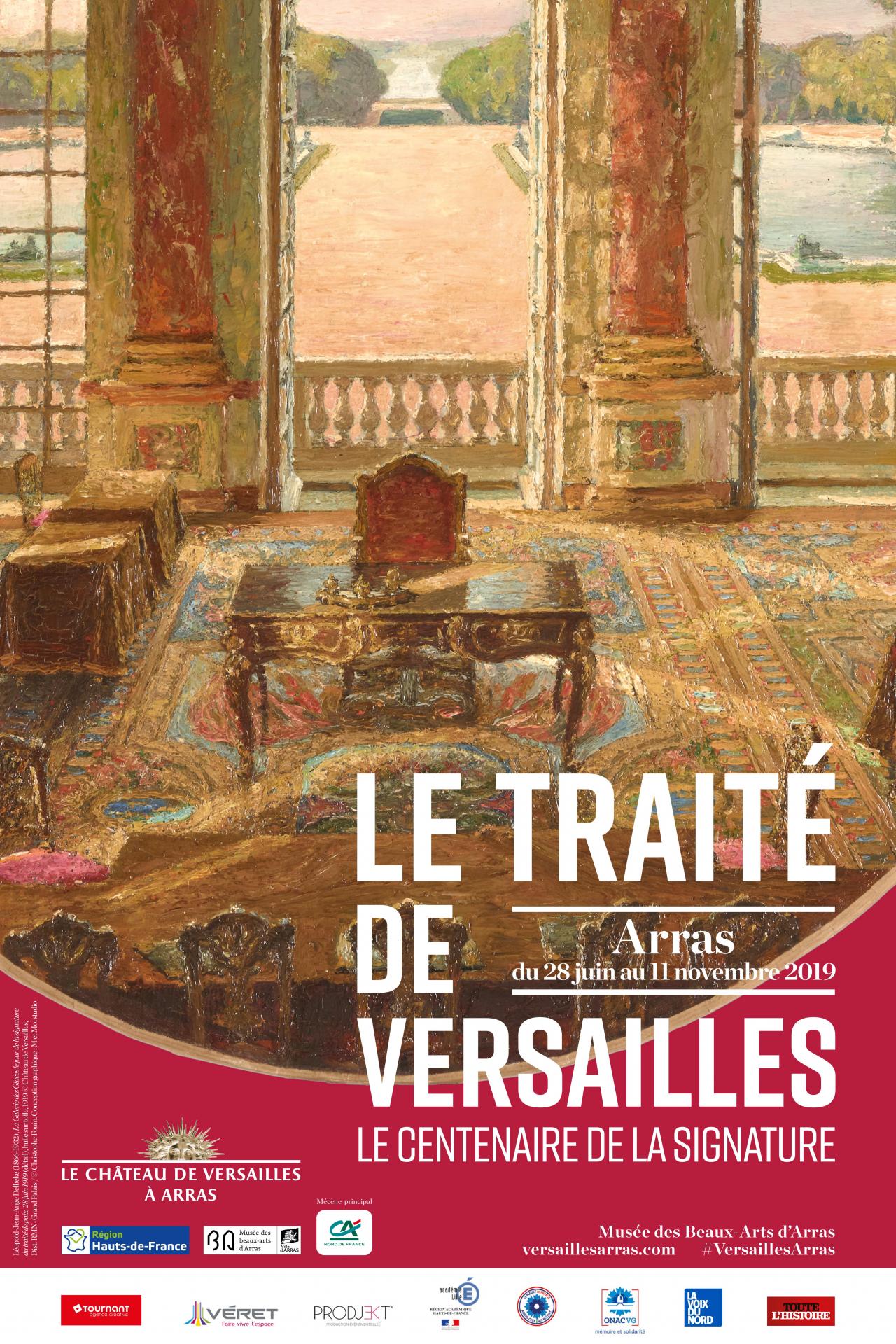 The exhibition at Arras Musée des Beaux-Arts focuses on the moment the Treaty was signed and is centred around the iconic symbol of the event, the desk at which the signing took place, which is held in the Palace of Versailles collection. The exhibition route then charts the role of the Hall of Mirrors in the various diplomatic events that took place at the Palace of Versailles – from the first ambassadors’ receptions held by Louis XIV to the Treaty of Versailles.

Year 10 pupils from the Jean Monnet d’Aubigny‐en‐Artois school, Year 12 pupils from the European class at Lycée Guy Mollet and the literary class at the Lycée Gambetta‐Carnot in Arras were invited to spend the whole school year working on the reproduction and presentation of this historical event, based around three main topics: how the Treaty was received in the local press, the Treaty and its global consequences and the presence of injured war veterans at the ceremony The pupils visited Arras Musée des Beaux-Arts and the rooms being developed for the project, as well as meeting the curators and scenographer, and the results of their work can be seen in the final room of the experience.

Webserie "The Palace of Versailles during the Great War"

This exhibition is organized thanks to the patronage of :