For the first time, the Palace of Versailles has created a dedicated exhibition space in which to display its collections of porcelain service items from the Vincennes and Sèvres royal manufactories. The new Porcelain Room, whose restauration has been made possible by the Fondation La Marck, is located in the King’s Private Apartments and may be visited on guided tours.


Almost a hundred porcelain items from the services collected by Louis XV and Louis XVI are now displayed in elegant cases in what was formerly the “Buffets” room in the King’s Private Apartments. This new arrangement enables visitors to view some less well-known items – some of which have been taken out of storage – and the Palace of Versailles to highlight its latest acquisitions.

The art of table décor

Dining in private became popular during the reign of Louis XV, who was not overly fond of the public ceremonies. Starting in 1769, the sovereign extended his private apartment, adding the so-called “New Rooms” dining room, to which his most favoured courtiers were invited, particularly for the big suppers held after hunting trips.

Later, Louis XVI and  Marie-Antoinette, to restore some glamour to life at Court, began hosting “society meals” in the same “New Rooms” dining room, to which around 40 guests would be invited, based on their status or worthiness. For these gatherings, either a service made from silver or the most beautiful Sèvres porcelain service was used.

Once supper was over, the guests would repair to the adjoining “Buffets” room to play billiards. This was also where the most valuable services were kept, so, under this new arrangement, the Porcelain Room is, once again, fulfilling part of its original function.

The collections on display

The French coat of arms service


Commissioned by Louis XV in 1738 via the French East India Company, this service was probably destined for the new winter dining room established in 1735 on the second floor of the King’s apartments. It was used until the arrival of the “celestial blue” Vincennes porcelain service.


This service comprising 1,749 separate pieces, of which 1,266 were tableware items in biscuit porcelain, was commissioned in 1751 and delivered in batches by the Vincennes manufactory between 1753 and 1755. The King’s goldsmith, Jean-Claude Duplessis (1699-1774), produced designs for all of the pieces specially, while the chemist Jean Hellot developed a new turquoise blue ground colour called “celestial blue”, in honour of the Middle Empire (China). This Louis XV service was used by the royal family right up to the end of the Ancien Régime.

This service, with its décor of birds and blossoms, was part of a purchase made on 9 March 1758 from the quality-goods merchant, Lazare Duvaux, based in Rue Saint-Honoré in Paris. It was later completed with further deliveries from the Sèvres manufactory.

From 1757, porcelain from the Sèvres manufactory was presented as a diplomatic gift – such as the services given to King Frederick V of Denmark and Empress Maria Theresa of Austria – and bestowed by Louis XV upon certain courtiers whom he deemed particularly worthy.

Service with a golden-edged pebble pattern on a lapis background

This service, delivered to Louis XV in 1762, is notable for its floral décor and lavish gilding on a pebbled background. It was taken to the Tuileries by Louis XVI, who continued to replenish it up to 1793.


This small set of tableware was commissioned via the pottery merchant Madame Lair and delivered to Louis XV in 1759. Suitable for small gatherings of guests, it was initially used at the Château de la Muette, and then completed by Louis XVI for the Château de Saint-Cloud and, ultimately, the Tuileries Palace.


Also known as the “great Versailles service”, it was commissioned from the Sèvres royal manufactory on January 3rd 1783. Louis XVI himself chose the iconography, featuring mainly Ovid’s Metamorphoses, Roman history and Fénelon’s Telemachus. It is characterised by its “beau bleu” (dark blue) background and elaborate golden foliage around the edges. The collection was originally meant to comprise 445 pieces and due to be completed by 1803. However, the order was put on hold in 1793 owing to the death of the king, and only 198 pieces were actually made. In the early 19th century, the bulk of the service was acquired by the future king of England, George IV, for Windsor Castle.


Commissioned from Sèvres in 1782, this service was for the “Gobelet du Roi” (king’s household) and used by the king’s personal kitchen staff. This important collection was delivered to Louis XVI between 1783 and 1790.

Designed for keeping the score in games of billiards, this Sèvres porcelain plaque, delivered in 1786, is decorated with bunches and hanging garlands of flowers, as well as three billiard cues and ten balls. It was included in the inventory for this room from 1791, before being sold in the wake of the Revolution.

The Porcelain Room can be visited as part of the “Versailles, private side” guided tour. 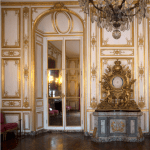 Discover the “other Versailles”, the Versailles of King Louis XV and his family, private apartments, and intimate life.

Discover the “other Versailles”, the Versailles of King Louis XV and his family, private apartments, and intimate life.
10 €
Read more
Versailles, private side

Available from September 2019, this visit will replace the visit "Private Apartments of the Kings" during restoration works.

Discover the “other Versailles”, the Versailles of King Louis XV and his family, private apartments, and intimate life. Far from the pomp and splendour, luxury remains...and personalities are revealed.

This tour in English is available everyday except on Mondays.