Work on the restoration of the King’s Private Chamber, which was a private study for Louis XV and Louis XVI, began on Monday 11 March 2019 thanks to the patronage of Rolex France, which is supporting the Palace of Versailles for the first time to help restore it to its former glory.

Restoration work on the King's Private Chamber is now underway. Following on from the King’s Bedchamber and the Clock Room, it is the last remaining room in the King's Private Apartments to still have faded gilding and paintwork. Restoration of the room, supported by Rolex France, had become essential. The project aims to restore this masterpiece of Rococo art to its former glory, while preserving and showcasing all its authenticity with the greatest care. 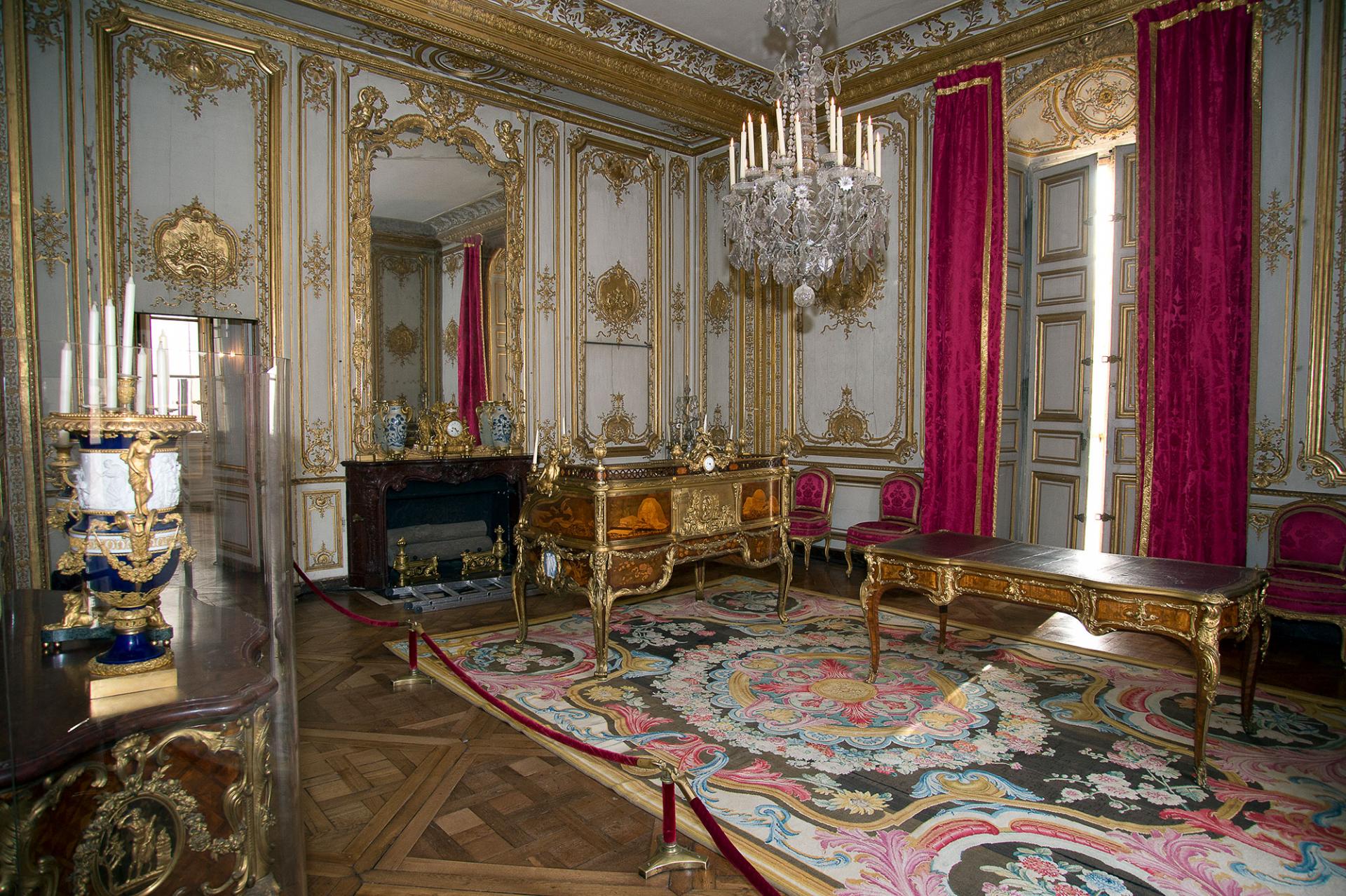 A key place of power

Initially a billiards room, it was turned into a paintings room by Jules Hardouin-Mansart to house the collection belonging to Louis XIV. It was later divided into three separate rooms by Ange-Jacques Gabriel between 1735 and 1738 for the King’s Private Apartments, in accordance with Louis XV's desire for more comfortable, private living spaces in line with the tastes of the time. From then on, this private chamber became the sovereign’s study where he liked to retire alone or with one of his ministers. Louis XVI maintained this purpose and the room remained a place in which the King could see to his personal affairs.

“As you continue the visit of the apartments on the courtyard side of the Palace, you come across this series of rooms where the King spent his time and worked ceaselessly. The rarest furniture was crowded in here, along with a host of curiosities”, explains a page from the Court of Louis XVI (according to a text published in 1873 by Charles-Robert-Marie-Guillaume de France d’Hézecques).

During the reign of Louis XVI, the private chamber was notably the backdrop to the negotiations between France and the ambassadors of the future United States of America, during Benjamin Franklin's visit to conclude an alliance in 1778. The sumptuous "American Independence" candelabra, commissioned by Louis XVI from Pierre-Philippe Thomire and delivered and placed in this very room in 1785, bears testimony to the event. It celebrates not only one of the most important military and diplomatic acts of his reign, but also the lasting friendship between France and America against England. 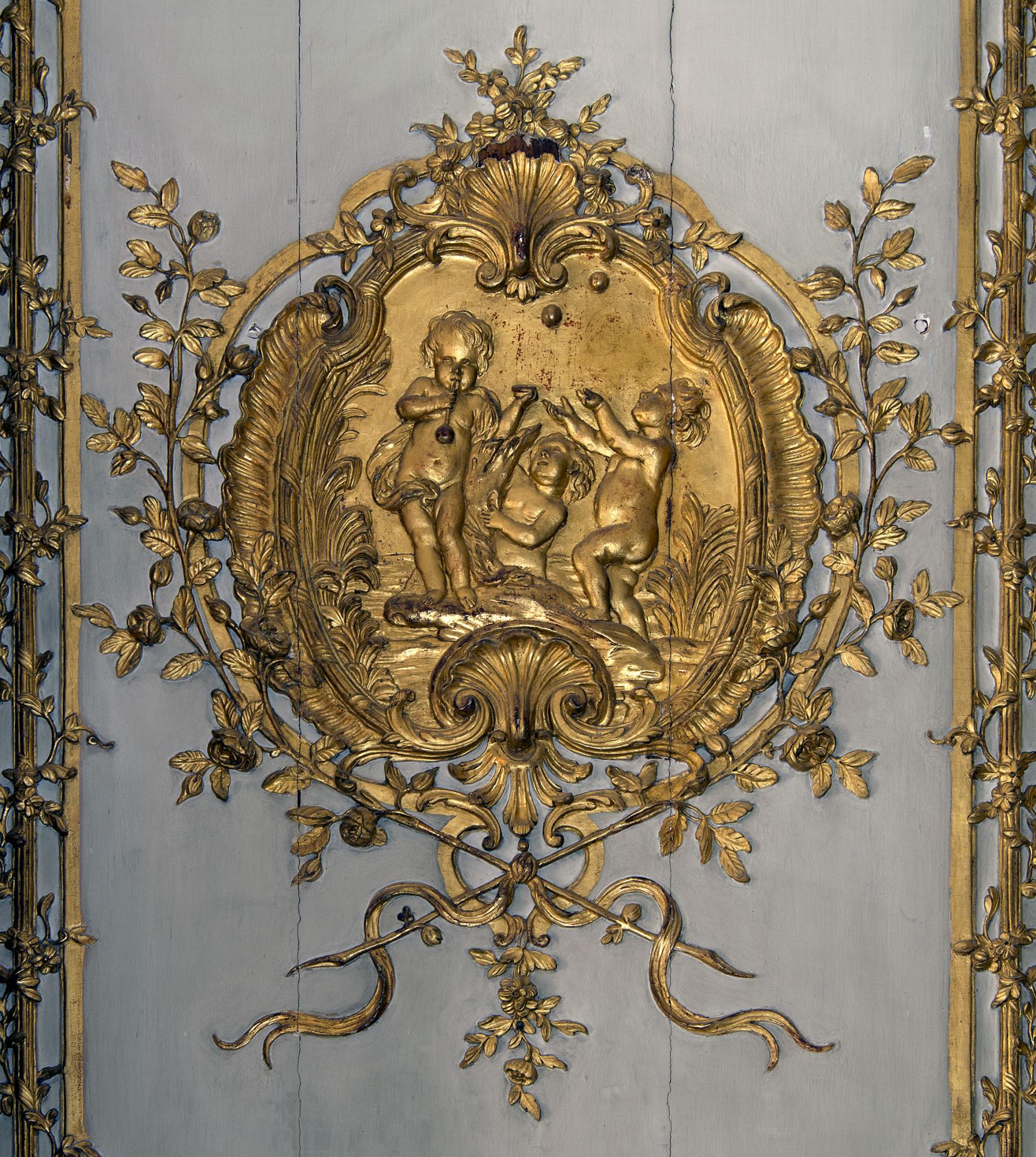 This space dedicated to the king’s work was originally hung with damask tapestries, until successive changes were made between 1753 and 1760 to harmonise the decoration with the rest of the apartments, composed of floor-to-ceiling wood panelling and gilding. The decoration of the private chamber, by Jacques Verberckt, is a real masterpiece and one of the finest examples of rococo decoration in the Palace.

The mirrors are framed by palm trees with garland decoration and mid-height fleur-de-lis crowned with small, pacific trophies, as well as tambourines, pipes, quivers, torches, hunting symbols and country scenes. The motifs are harmonised without repeating themselves. At the top of the wood panels are decorations of children holding garlands in different positions. Children are the main subject of the decoration, featuring in seven medallions in the centre of the panels and nine large bas-reliefs. They are represented playing on rocking horses and with soap bubbles, making garlands and harvesting, or playing with animals such as a dolphin and a small dog. One of the finest scenes shows a different interpretation of the traditional scene of children with a goat.

These decorative changes marked the start of a new phase in the role and reputation of the room. The furniture installed in the room by Louis XV was outstanding in terms of its elegance, form, quality of the marquetry and magnificence of the bronze work. Still in place today, it includes the commode and medallion cabinet by Antoine-Robert Gaudreaus, delivered in 1738, the corner cupboards delivered by Gilles Joubert in 1755 and, most notably, the cylindrical desk begun by Jean-François Œben and completed by Jean-Henri Riesener between 1760 and 1769, which is probably one of the most famous pieces of furniture in the world. 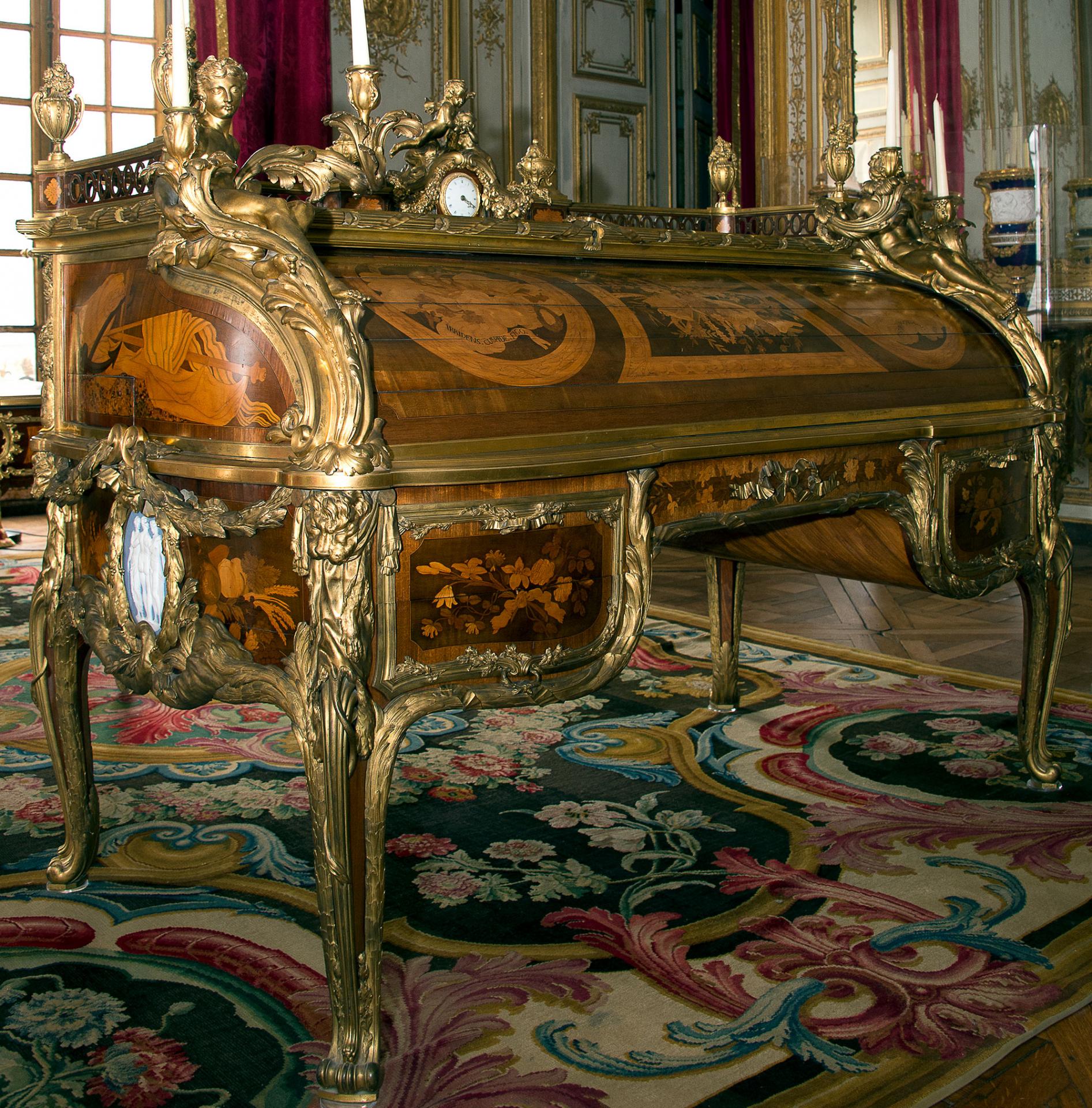 This cylindrical desk was commissioned from cabinetmaker Œben in 1760, but had not been completed by the time he died in 1763. Riesener took over the work and delivered the item to Versailles in 1769, when it was placed in the King’s private chamber.

This 18th-century masterpiece of French furniture is an amazing feat of technical and aesthetic skill including marquetry, veneer, bronze work, mechanics, gilding, clockmaking and precious wood. The height of refinement was required for the service of the King.

It is decorated with motifs celebrating the king, the arts, science and trade. The large marquetry work, possibly designed by Riesener, shows symbols of writing, dramatic and lyric poetry, astronomy, maths, seamanship and war. Produce of the land and sea are also shown on either side of the king’s cipher, and symbols of the monarchy adorn the central section of the cylinder.

The bronze decoration, designed by Jean Claude Duplessis and crafted by Hervieu, is inspired by Antiquity: Apollo and Calliope, the muse of eloquence and epic poetry, are holding chandeliers on either side of the cylinder; tribute is paid to Minerva in the bas-relief in the middle of the back, and clubs and the dead body of the lion killed by Hercules adorn the corners.

The desk’s monarchic emblems were replaced during the Revolution in collaboration with Riesener (the symbols of the monarchy on the cylinder by a scientific trophy; the king’s cipher by two pieces of blue and white Sèvres bisque porcelain) or were simply removed, such as the king’s medallion. 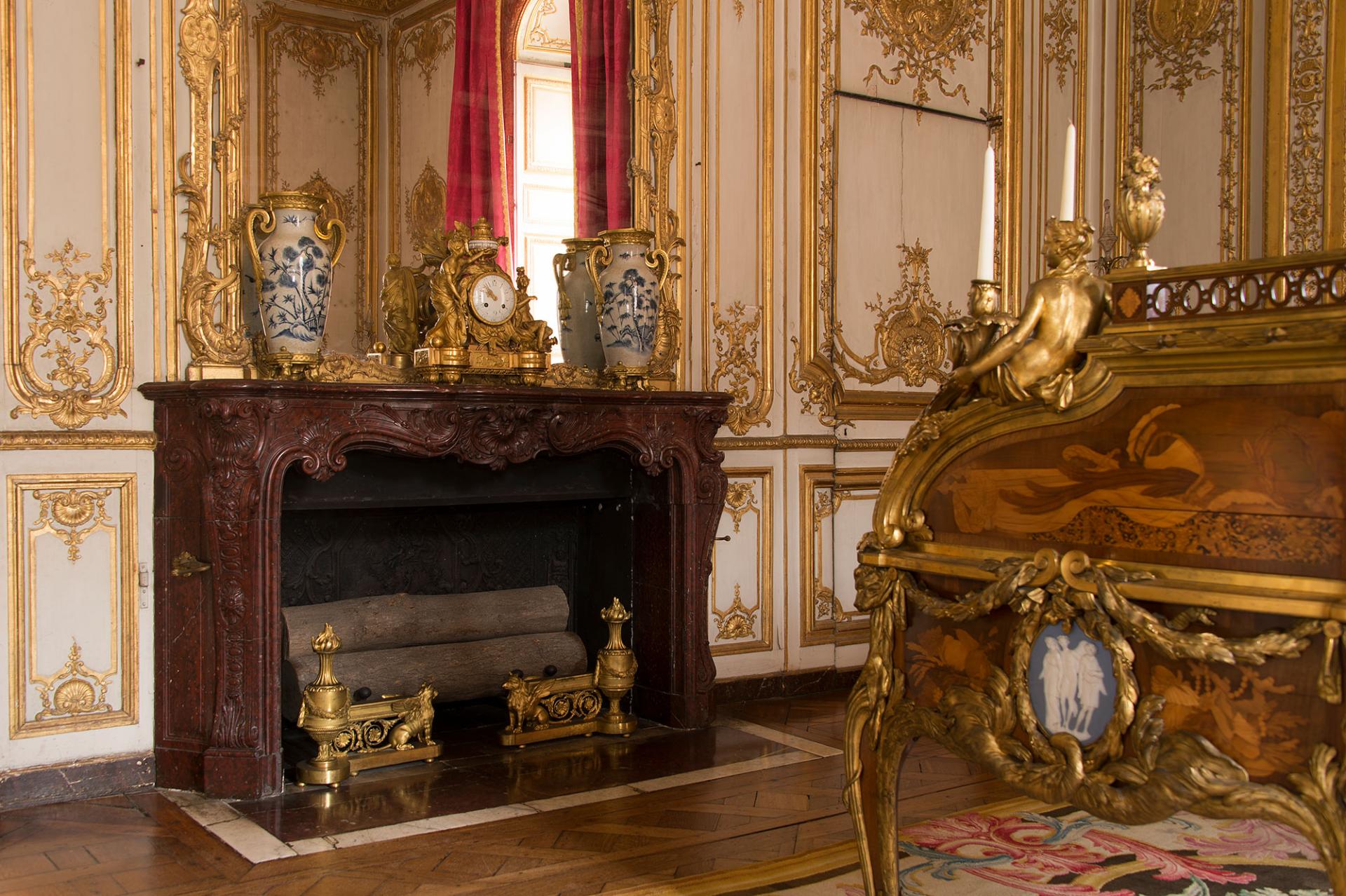 The restoration project will restore the work identically to its original condition, mainly focussing on the decorative woodwork, paintings, gilding, wood flooring, gypsum decoration and the marble around the fireplace. The panelling and flooring will be entirely removed to allow necessary structural reinforcement and the concealment of the lighting and safety networks. The decorative woodwork and fireplace will be restored in workshops, with the exception of the embrasure panelling leading to the Clock Room, which will be restored on site. Missing parts of the sculptured work will be recreated or replaced using information provided by the Conservation Department.

The ancient gilding will be cleaned and added to where necessary and the Blanc de Roi paintwork will be identically recreated using 17th-century techniques. To improve the presentation of the room for visitors, the lighting from the old lights, chandeliers, girandoles and candelabras will be redesigned to recreate the original feeling of intimacy. The project will also include work on the masonry and plastering, as well as structural work on parts that are normally covered up.

In addition, the cylindrical desk will be entrusted to the Centre de Recherche et de Restauration des Musées de France for cleaning and re-gluing of raised veneer and marquetry. General cleaning of the bronzes and medallions by Gaudreaus and Joubert will also be carried out.

Rolex at the service of art and culture

Since its creation in 1905, Rolex, a Swiss watch manufacturer based in Geneva, has been renowned for its skill and the quality of its products. Its spirit of excellence is translated by its unwavering dedication to beauty, creativity and durability and is reflected in its long-term commitment to art and culture. Whether for music, architecture, cinema, literature or any other form of creativity, Rolex works behind the scenes to help preserve cultural treasures and share knowledge “to build a better world for future generations”. Much more than just a word on a watch face, “Perpetual” is a genuine philosophy inspired by the vision of Hans Wilsdorf, the founder of Rolex.

Driven by this desire to help preserve and transmit unique cultural heritage anchored in history, Rolex France is supporting the Palace of Versailles for the first time for the restoration of the King’s Private Chamber, allowing this wonderful setting to rediscover its former splendour with its woodwork and emblematic objects of art, and at the same time adding a new dimension to the reputation of this exceptional site.