For its 12th exhibition of contemporary art, entitled Versailles – Visible/Invisible, the Palace of Versailles is bringing together five internationally renowned photographers at the estate of Trianon from 14 May to 20 October 2019.

The intimate surroundings of the Trianon will be the setting for the Palace of Versailles’ 12th exhibition of modern art. Versailles – Visible/Invisible leads us as if through the antique darkroom of five photographers: Dove Allouche, Nan Goldin, Martin Parr, Eric Poitevin and Viviane Sassen, who will unveil works they have created specially to resonate with the chosen setting. This exhibition showcases their original and often surprising perspectives on not only the palace’s most well-known spaces, but also its hidden gems. The works will reveal a new Versailles, between design and heritage. 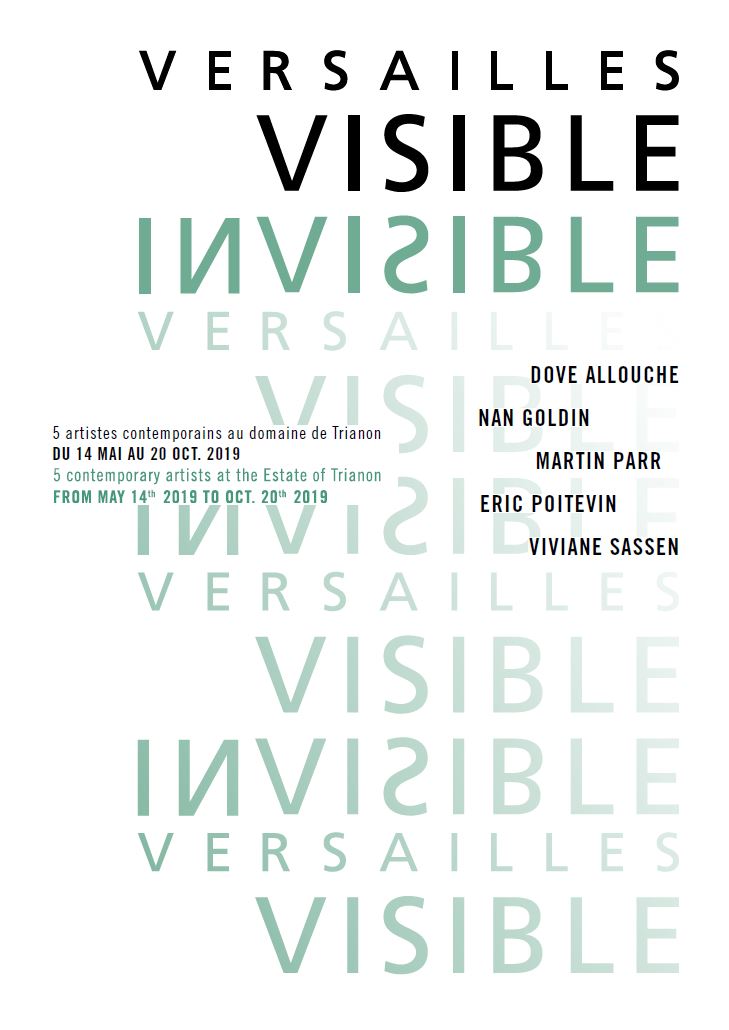 Photographer, printmaker and designer Dove Allouche, who was born in Paris in 1972, likes to reveal that which is simultaneously obvious and invisible. Like the concept of ‘magic eye’ images, he endeavours to depict things that are too close to the eye to be seen, that are right there in front of us but through which we see something else. His work has been the subject of several one-man exhibitions, the most recent of which include: Negative Capability at the Contemporary Art Gallery in Vancouver; Des caractères extérieurs at the gb agency in Paris; and Le beau danger at Peter Freeman in New York. His work has also featured in group exhibitions at the Wilhelm-Hack Museum in Ludwigshafen, the Centre Pompidou in Paris, the Fondazione Querini Stampalia in Venice and the Columbus Museum of Art in Ohio.

Of the myriad materials from which Versailles was built, Dove Allouche has focused particularly on gypsum. His abstract compositions in striking colours, inspired by gypsum, can be found in the Cotelle Gallery at the Grand Trianon.

Dove Allouche is represented by Peter Freeman Inc in New York and the gb agency in Paris.

The American Nan Goldin divides her time between New York, Paris and Berlin. She was given her first camera at the age of 15 in Boston, where she attended the ‘hippie free school’, and started by taking pictures of herself and her friends. Having graduated from the School of the Museum of Fine Arts in Boston in 1977, she moved to New York the following year, where she continued to document the lives of her ‘extended family’. Soon she was presenting slideshows of her photographs, accompanied by a soundtrack from the city’s nightclubs. The images shown in these slide shows were subsequently compiled into her first book, called The Ballad of Sexual Dependency.

Nan Goldin explores both the labyrinth of underground hydraulic systems feeding the fountains as well as the ubiquitous female icons of mythology found in the statuary throughout the gardens. On the ground floor of the Petit Trianon with Hala Wardé and HW architecture, she creates a trail accompanied by an audio reconstruction of the 1789 Women’s March on Versailles produced by Soundwalk Collective.

Martin Parr was born in 1952 and is one of the leading documentary photographers of his generation, having published more than a hundred books of his own work and editing a further thirty. He has also been the curator of two festivals – the Rencontres d’Arles in 2004 and the Brighton Biennial in 2010 – as well as the Strange and Familiar exhibition at the Barbican in London. Martin Parr has been a member of the Magnum agency since 1994 and was its president from 2013 to 2017. In 2013, he was made visiting professor of photography at the University of Ulster. His work is part of the collections of several prestigious museums, including the Tate, Centre Pompidou and New York’s Museum of Modern Art. In 2017, the photographer established the Martin Parr Foundation.

True to form, Martin Parr takes inspiration from the crowds of people who visit Versailles: their cosmopolitan diversity gives rise to a colourful series of images, rich in emotion and ironic humour. These are on display in the Pavillon Frais (located in the French Garden of the Petit Trianon), which is open to the public for the first time.

Martin Parr is represented by Kamel Mennour (Paris) and the Magnum agency.

Eric Poitevin, born in 1961 and a resident of the Villa Médicis from 1989 to 1990, now lives and works in Mangiennes (Meuse). His photographs are the result of a progressive decision-making process, whether they feature the faces of First World War soldiers (1985), dead deer (1995), skulls and butterflies (1994), undergrowth (1995), the hindquarters of horses (1999–2000) or bits of human bodies (2001). Having sometimes waited for months for the subject of the photograph to reach the desired state, he carefully constructs the image. The light, paper format and frame all have to correspond to the density and fragility of each subject represented.

Eric Poitevin has chosen the Jussieu Orangerie (Petit Trianon) to unveil two new photographic series, both on the theme of nature. One attempts to capture that which holds particular symbolism at Versailles: the sun; the other is a delicate visual study of the angelica plant and its splayed bipinnate leaves.

Eric Poitevin is represented by the Baronian Xippas gallery (Brussels).

Dutch artist Viviane Sassen, 46, lives in Amsterdam and studied fashion design, then photography, at the Utrecht art school (HKU) and Ateliers Arnhem. Her photographs challenge traditional perceptions: some are carefully constructed, others depict random scenes, leaving the spectator unable to distinguish between those that stem from the artist’s own imagination and real-life scenes. In her work, she is highly aware of the formalism of painting, sculpture and photography, and has a sharp sense of colour and of the visual resonance of patterns and shapes. As well as several one-woman exhibitions, her work was shown in The Encyclopedic Palace – the main exhibition at the 55th Venice Biennale in 2013.

Viviane Sassen splashes her colour-soaked images throughout the rooms of the Grand Trianon. From her studious examination of Versailles’s statuary and the history of the palace and its occupants, she builds a narrative incorporating images of modern teenagers.

Viviane Sassen is represented by the Stevenson gallery (Cape Town).

Every year since 2008, the Palace of Versailles has organised an exhibition of contemporary art featuring French and foreign artists: Jeff Koons in 2008, Xavier Veilhan in 2009, Takashi Murakami in 2010, Bernar Venet in 2011, Joana Vasconcelos in 2012, Giuseppe Penone in 2013, Lee Ufan in 2014, Anish Kapoor in 2015, Olafur Eliasson in 2016, the Voyage d’Hiver group exhibition in 2017 and Hiroshi Sugimoto in 2018. These are all artists who have established an original dialogue between their work, the Palace and the gardens of the estate.

This exhibition is organised with the patronage of :