Thanks to the patronage of the BNP Paribas Foundation and the support of D’Huart Industrie, the Palace of Versailles has restored the Golden Children's Fountain, a masterpiece of lead statuary in the gardens of Versailles. 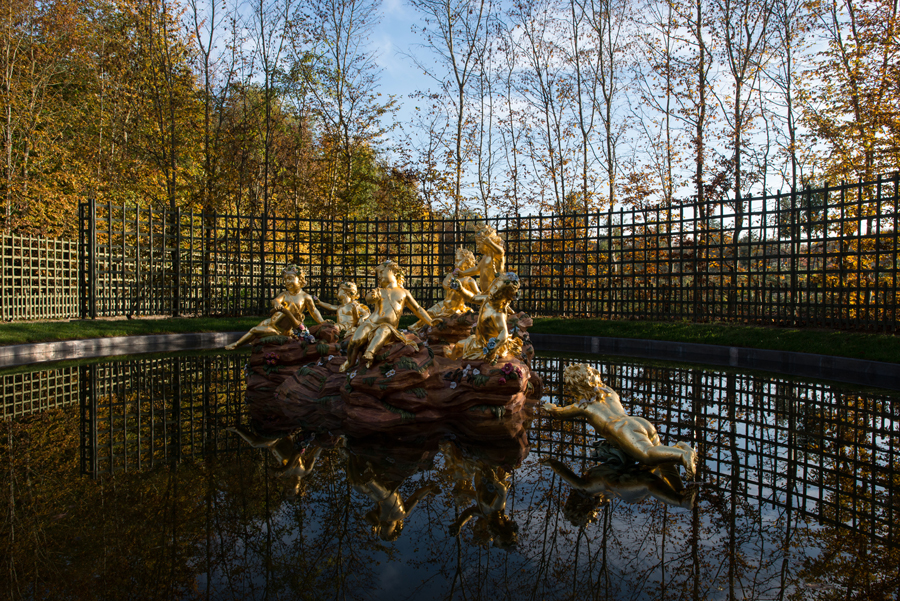 Situated just next to the Water Theatre Grove, to the north of the Versailles Park, today's Golden Children's Fountain was created by Jules Hardouin-Mansart after 1704. The centre of this small oval-shaped pool is adorned with a group of lead cherubs, made in 1704 by Jean Hardy and originally intended for the pools in the park at Marly, but in the end transferred to Versailles in 1709. A veritable masterpiece of lead statuary in the gardens of Versailles, it testifies to Louis XIV's fondness for childhood following the death of a number of his descendants, which cast a shadow over the end of his reign.

Restored in the 1940s and 1980s, the Golden Children's Fountain was badly damaged in the storm of 1999. A thorough restoration programme proved to be necessary for the structural stonework, waterproofing and fountain works.  The central group and the decorative gilded lead elements were restored in the Coubertin foundries. In addition to this work the stretch of grass and sandy soil around the pool were restored. The programme concluded a series of projects conducted over more than ten years at the northern end of the gardens of Versailles in order to promote the fineness and details of the composition of Louis XIV's garden. This restoration project required specific skills from different artistic professions (gilders, fountain engineers, metal restorers, stonemasons, gardeners) which were coordinated by Head Architect for Historic Monuments Pierre-André Lablaude and the Palace of Versailles’s department in charge of heritage and gardens. The operation thus dovetailed with the Palace of Versailles’s ambition to promote the excellence of such unique and delicate know-how.

The Golden Children #2 - The boilermaker

The Golden Children #3 - The fountain engineers

The Golden Children #4 - The painter and the gilder

Restoration of the Golden Children's Fountain was made possible thanks to the patronage of the Fondation BNP Paribas. This is the fourth time that the Fondation has supported a project at the Palace of Versailles. The restoration of the Golden Children's Pool also benefited from the skills sponsorship of the company D’Huart Industrie, which provided all the lead required to make the pool watertight and demonstrates its desire to support heritage preservation programmes.

The Golden Children's Fountain was restored thanks to the patronage of the Fondation BNP Paribas and the skills sponsorship of D'Huart Industries.