Ordinary Cabinetmaker of Furniture for the Crown
1734-1806

Riesener was Marie Antoinette’s preferred cabinetmaker and was incontestably the greatest master of Louis XVI furniture. He also completed, for Louis XV, one of the finest pieces of furniture in the world: the bureau for the monarch's private cabinet in Versailles.

Title
Ordinary Cabinetmaker of Furniture for the Crown

His traces in Versailles
His work

Born in Germany, Riesener began his career at the service of the monarchy with the roll-top cylinder bureau for Louis XV, which was placed in his private cabinet. Commissioned in 1760 for Oeben, his father-in-law and instructor, the desk was exceptional in its innovativeness, the refinement of the marquetry, the quality of the bronzework and, above all, the ingenuity of its locking mechanism which allowed the whole desk to be locked with a single turn of a key, and opened by the simple press of a button! Completed in 1769, it was later modified during the Revolution by its creator, who was obliged to remove the royal symbols. The bureau was a hugely prestigious piece of work and firmly established Riesener’s reputation.

Commissions from the Court came flooding in thereafter, and for more than ten years Riesener was the principal craftsman for royal residences. His exorbitant prices, however, alienated part of his clientele and he lost some of his custom to his confrere, Beneman. Marie Antoinette nevertheless remained a loyal customer.

In 1775 Riesener delivered four corner cupboards for Louis XVI’s Games Room, and in the same year also supplied the king with a new exceptional piece of furniture, the commode for his chamber in Versailles. The straight lines, stocky design, heavy and rich bronzework and the remarkable trapezoid marquetry on the central part are characteristic of the cabinetmaker’s Neo-Classical style. In contrast to this extravagant design he also employed a more sober aesthetic, as demonstrated by the large sequoia table in the King’s library.

It was for Marie-Antoinette that Riesener delivered his most elegant and innovative pieces of furniture. For the Nobles’ Room in Versailles he supplied two corner cupboards and a commode, in which he moved away from marquetry in preference for a simple veneer in mahogany. The bronzework was reduced and refined. For Marie-Antoinette's boudoir in Fontainebleau he delivered a fragile piece made of mother-of-pearl, the only one of its kind. For the Petit Trianon he supplied a collection of innovative works which included a writing table with rounded corners and an identical console-desserte in mahogany and bronze.

Riesener’s work was sold off at auction during the Revolution, and the cabinetmaker bought back some of it in a scheme to resell the pieces to wealthy foreign clients. But the times had changed and so had tastes, and many of his old clients were dead or scattered. This period marked the end of his brilliant career. 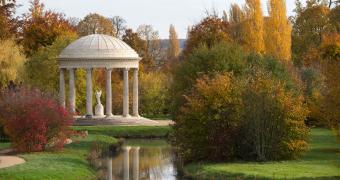 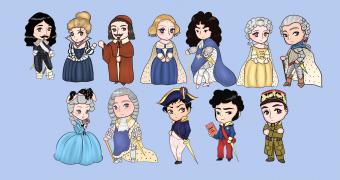