Élisabeth Louise Vigée Le Brun was one of the great portrait artists of her day, easily the equal of Quentin de La Tour or Jean Baptiste Greuze. Born into relatively modest circumstances, she firmly established herself in society’s upper crust. After earning the favours of the king and his family, she became the official artist of Queen Marie Antoinette.

Title
Portraitist of the Queen

Her traces in Versailles
Her work

Élisabeth Louise Vigée was the daughter of Louis Vigée, a pastel artist and member of the Académie de Saint-Luc, and his wife Jeanne Maissin, of countryman origin. Baptised at the church of Saint-Eustache in Paris, at the age of six Élisabeth entered the Trinity Convent School on Rue de Charonne, in the Saint-Antoine district of the capital. From an early age the young artist painted on every available surface, from her school books to the walls of her school. This precocious gift prompted her father to declare, prophetically: “If anybody was born to be a painter, my child, it’s you.” The young Elisabeth was very attached to her father, who died when she was just twelve years old. Fortunately he had had time enough to recognise his daughter’s artistic talent and to teach her the basics of art, especially with pastels, his own speciality. Naturally enough, the young artist’s first subjects were her friends and family. Among them was the art dealer Jean Baptiste Pierre Le Brun, whom she married in 1776. 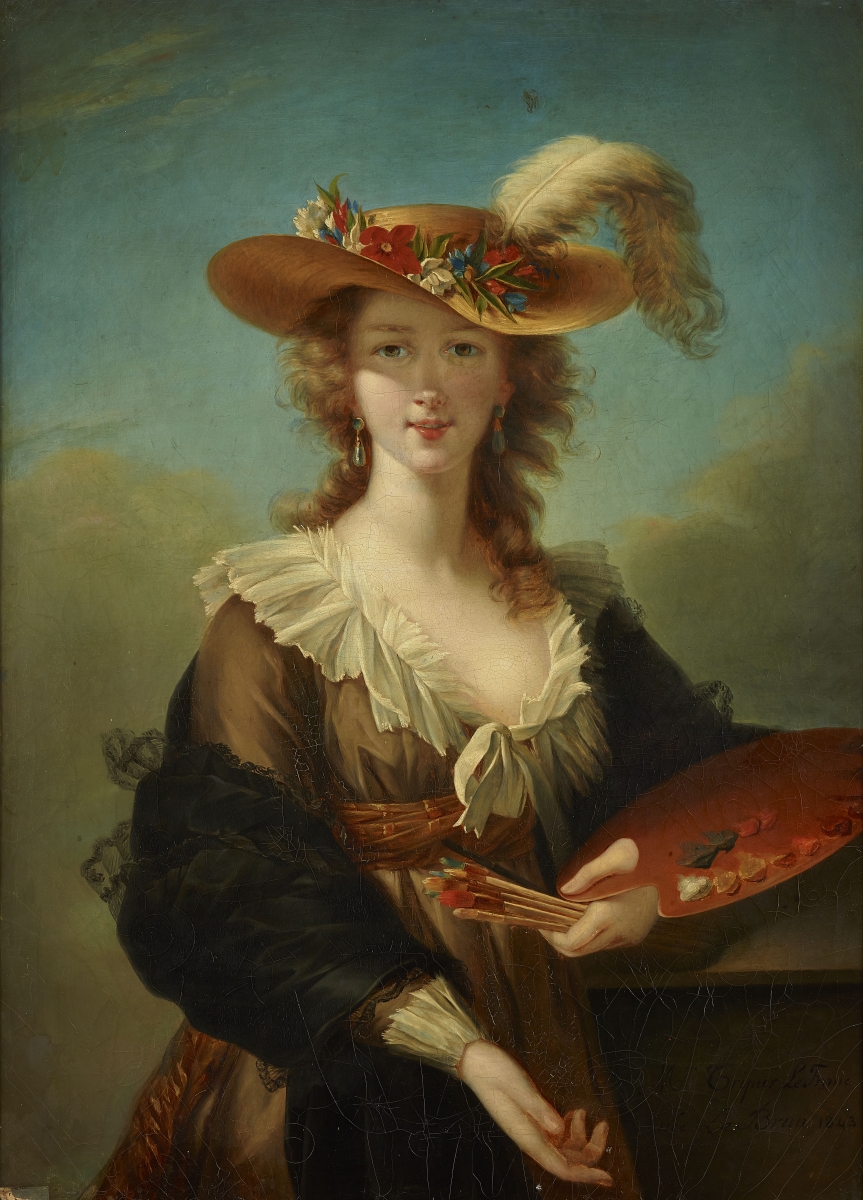 After years spent honing her craft in the workshops of Blaise Bocquet, Pierre Davesne and Gabriel Briard, Élisabeth Louise Vigée Le Brun gradually developed a highly sophisticated and distinctly personal technique which made her the equal of the most skilled portrait artists of the day. This technical prowess – combined with her brother’s success as a writer, the expertise of her husband and their network of influential contacts – helped her to rapidly develop an exclusive clientele and a burgeoning reputation. She became a member of the Académie de Saint-Luc in 1774, and four years later was appointed official artist to Marie Antoinette, who would become her patron and confidante. In 1783, thanks largely to the queen’s influence, Vigée Le Brun was admitted to the Royal Academy of Painting and Sculpture on the strength of her reception piece, the allegorical painting of Peace restoring Abundance. The director of the Academy, Jean Baptiste Marie Pierre, had been strongly opposed to admitting this newcomer. According to the rules of the period, her husband’s profession as an art dealer should have disqualified Vigée Le Brun from entering the Academy, as women had no social status beyond that of their husbands. Her admission to the Academy was the ultimate honour.

After painting the first major official portrait of Marie Antoinette in 1778, which met with a very positive reception, Vigée Le Brun was regularly called upon to paint the queen and produced 30 portraits of Marie Antoinette in six years. The queen enjoyed sitting for her friend Élisabeth Louise and received her in her private apartments. In 1783, she painted a portrait of the queen in informal attire which provoked outraged reactions at Court. But Vigée Le Brun’s reputation did not suffer, and she kept her royal and aristocratic clients.

Driven by her talent, her great capacity for work and her widely-admired beauty, Vigée Le Brun furthered her career by rubbing shoulders with the elite and gradually climbing the social ladder. Her works from the 1780s demonstrate just how successful she was. Vigée Le Brun’s numerous portraits provide a wonderful window onto the changing fashions of the day. Women of ample proportions and full, sensuous lips are depicted with an indolent, dreamy or even frankly provocative look in their eyes. Her portraits often contain sensual undertones, a sort of animal magnetism which at times becomes erotically-charged.

Socially and professionally dependent on the patronage of the royal family, the court and the nobility, Vigée Le Brun was the subject of vicious slander in various pamphlets. Forced to leave Paris with her daughter and the latter’s governess on the night of 6 October 1789, just as the royal family was being transferred to the capital, she opted to travel to Italy. This was to be the start of a long exile of over twelve years. Separated from her husband and her life at court, the artist relied on her reputation and charm to build up a European clientele fascinated by the French style. Between1789 - 1802 her talent earned official recognition and plaudits from the academies of Rome, Bologna, Parma, Florence and Saint Petersburg. Élisabeth Louise Vigée Le Brun enjoyed success wherever she went, and thanks to the prices she charged for her portraits she was able to maintain a lifestyle in keeping with her grand reputation. Shortly after returning to Paris on 18 January 1802, Vigée Le Brun became a regular guest of Laure Regnaud de Saint-Jean d’Angely and also frequented the company of Joséphine Bonaparte. She soon renewed her contacts with some of her social circle from the pre-1789 days, such as Greuze, Hubert Robert, Brongniart and Ménageot. She continued to put her paintbrush at the service of the Empire and Europe’s aristocracy, making several visits to England between 1803 and 1805.

She settled in France permanently in 1805, devoting herself to preserving the delicacy and unique sensibility in her work which had made her portraits such a success before the Revolution and during the Emigration. On 30 March 1842, Élisabeth Louis Vigée Le Brun passed away at 99 Rue Saint-Lazare, Paris.