Described by her brother, Emperor Joseph II, as “honest and lovable,” Marie Antoinette was an Austrian princess and the wife of King Louis XVI. She remains one of the most iconic characters in Versailles’ rich history. She arrived at the French Court aged only fifteen. From the time of her marriage to the Dauphin Louis, heir to the throne, she found it difficult to adapt to French customs and when she became Queen, she committed more and more blunders, often unwittingly, which gradually alienated public opinion, helping to tarnish her image in a most disastrous way.

Marie Antoinette was born in Vienna on 2 November 1755, the daughter of Holy Roman Emperor Francis I and Habsburg Empress Maria Theresa. Her marriage with the future Louis XVI, celebrated in the Royal Chapel at Versailles on 16 May 1770, was partly the work of the Duke de Choiseul, Secretary of State for Foreign Affairs and one of the principal architects of the reconciliation between France and Austria. The marriage nonetheless met with a lukewarm reception from the French public, who had not forgotten their country’s long-standing enmity towards the House of Austria. A highlight of the lavish festivities to mark the royal wedding was the inauguration of the Royal Opera.

The young Dauphine became the first lady at Court. In the eyes of the public, she and her husband symbolised the promise of a new reign which, given Louis XV’s advancing age, was expected to begin soon. The ageing King had in fact become very unpopular and his death on 10 May 1774 was looked on with relief throughout the kingdom. Marie Antoinette became Queen when she was not yet twenty years old.

A queen at the court

Louis XVI was besotted with his wife and allowed her to take on a role at Court that had never been bestowed on the two previous queens, Maria Theresa of Spain and Marie Leszczyńska. Marie Antoinette enjoyed entertainment and was influential in choosing shows to be put on at Court. She encouraged artists and she loved court balls. As was required by her position, she also entertained her circle in her apartments, where she was a keen player of billiards and cards, often playing to excess, both losing and winning large sums, to such an extent that the King became worried and banned some of the more risky games that were swallowing up entire fortunes. Marie Antoinette was a musician, playing the harp and the harpsichord. She could also sing. She supported the composers she appreciated, like Grétry, Gluck and Sacchini. She had a very refined taste and as a result was patron for many artists, such as the painter Élisabeth Vigée Le Brun, whose successful career as a portraitist owed much to the Queen’s support, and who produced around thirty portraits of her. The Queen also devoted a lot of time to fashion, much to the chagrin of her mother, who regularly lectured her on this subject. She was also often known to interfere in the choice of her dresses or hairstyles, ignoring the lady-in-waiting whose job this was, and going so far as to receive the milliner Rose Bertin, nicknamed rather maliciously the “Minister of Fashion”.

Reopening of the Queen's Apartment

Upon her arrival in Versailles, Marie Antoinette lived in the Queen’s State Apartment and was bound by the official rituals of her royal position: the waking-up ceremony, the elaborate preparations, royal audiences, public meals, etc. Having grown up with the less elaborate ceremonial routine of Austria’s royal palaces, she had a hard time adapting to Versailles’ complex etiquette and tried to seek out a more private life. Surrounded by a circle of friends whom she had chosen herself (although not always wisely), she preferred to remain in her Private Chambers, located behind her State Apartments and which she hoped to extend into the floor above, and in the Petit Trianon, built by Louis XV and given to her as a gift by Louis XVI on his accession.

In 1778, after eight long years of marriage, she finally gave birth to her first child. Marie-Thérèse, known as “Madame Royale”, was soon followed by a Dauphin, Louis Joseph Xavier-François, born in 1781. A few years later she gave birth to Louis-Charles, who would go on to become Dauphin after the death of his elder brother in 1789, then Sophie-Béatrice, who lived for only a few months. The Queen was always an affectionate mother and was close to her children. The successive deaths of Sophie-Béatrice and the first Dauphin were particularly painful ordeals both for her and for the King. 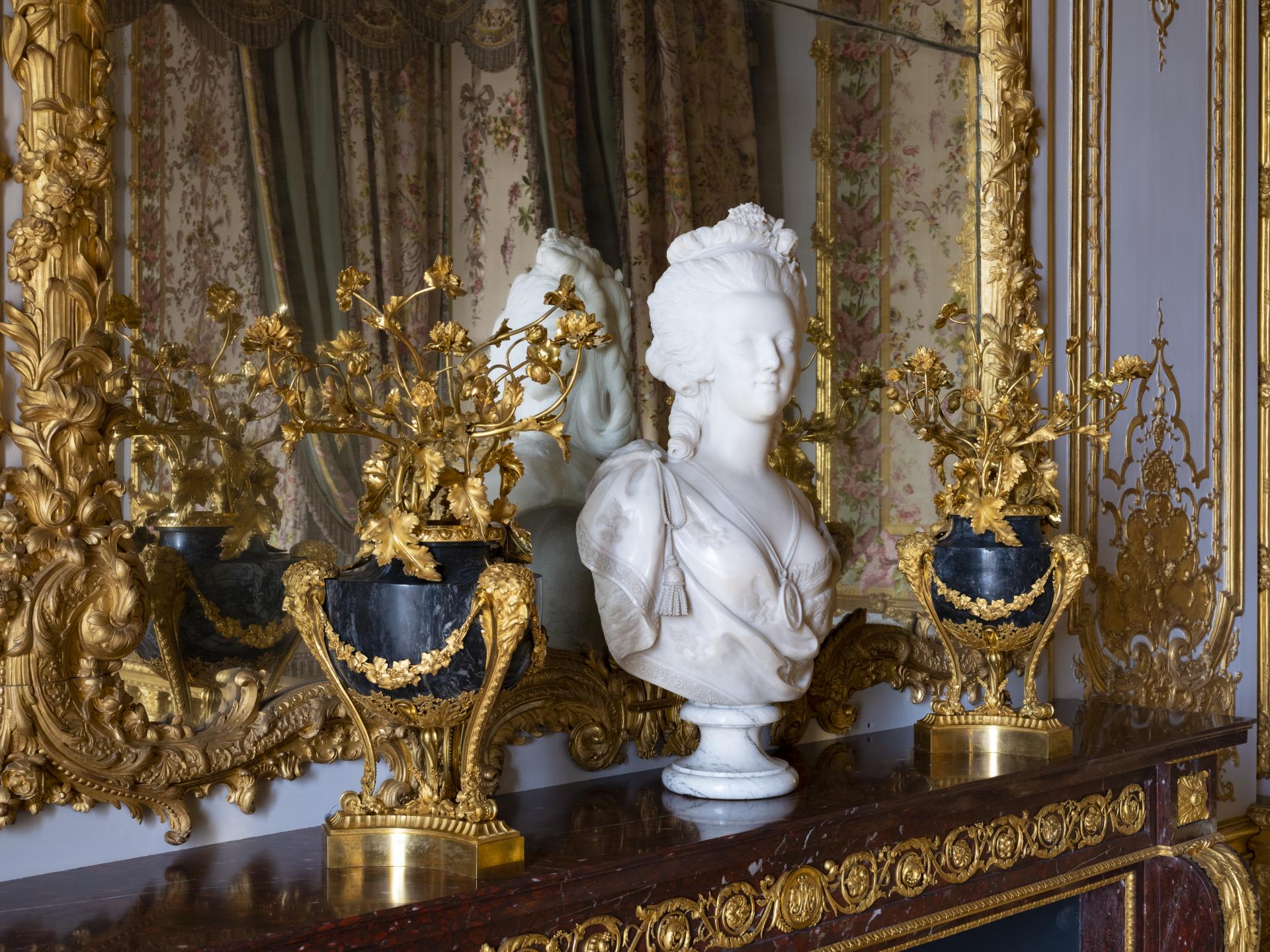 Under the influence of her mother, Marie Antoinette made some clumsy attempts to get involved in politics, which were met with scorn by the Court. Madame Adélaïde, aunt of Louis XVI, would not tolerate any fanciful behaviour on the part of the Queen – even of the most innocent kind – and gave her the derogatory nickname of “The Austrian” which would remain with her until her untimely death. Although public opinion of her was initially very favourable, the Queen gradually became the target of pamphlets, libels and caricatures, which intensified after the Affair of the Diamond Necklace in 1785, a swindle of which she was an innocent victim.  Her spending was scrutinised and often exaggerated, and she was accused of emptying the royal coffers even further. Every attempt to win back public opinion failed, and when the Revolution broke out, the Queen was a truly hated figure.

Marie Antoinette’s ambiguous attitude at the outbreak of the French Revolution – she seemed uncertain whether to run away or seek reconciliation – accelerated her tragic demise. She was imprisoned in the Temple on 10 August 1792, then moved to the Conciergerie shortly after the execution of the King in 1793. She demonstrated great courage during her trial before the Revolutionary Tribunal and at her execution on 16 October 1793 on what is now the Place de la Concorde. In 1815 her remains, along with those of Louis XVI, were transferred with due ceremony to the Abbey of Saint-Denis and placed in the crypt.