The Royal Opera is one of the greatest works by the architect Ange-Jacques Gabriel. Inaugurated in 1770 during the reign of Louis XV, it was at the time the largest concert hall in Europe, and was also a great technical achievement and an impressive feat of decorative refinement. A theatre for monarchic and then republican life, it has hosted celebrations, shows and parliamentary debates.

An idea of Louis XIV, built during the reign of Louis XV

Louis XIV wanted to give the Palace a concert hall that could accommodate the luxurious decor needed to host shows with machines, which he was particularly fond of. He wanted to build it at the end of the North Wing where the ground slopes, enabling the construction of large lower floors and a vast stage. Jules Hardouin-Mansart and Carlo Vigarani presented the King with different designs for a theatre (the idea at the time was for a Ballet Hall), but none of them really pleased the sovereign. Louis XIV turned his attention instead to the construction of the Royal Chapel (1710).

This change of mind by the famous King was due to a loss of interest in the grandiose shows he had enjoyed during his youth, his old age and all the setbacks that came with it, and the reality that most of the Court’s ordinary shows could be performed in the small hall in the Princes’ Courtyard which had been used since 1682. This situation remained unchanged for most of the following reign, despite the fact that Jacques-Ange Gabriel, made First Architect to the King in 1742, continued working tirelessly on the design. Initially reluctant, or at best only very mildly interested, Louis XV let Gabriel develop his project and agreed to send French architects to Italy to inspect the country’s finest halls. The aim was to bring back all the information and technical data necessary to allow Versailles to build a perfect theatre. It would not be designed to host ordinary shows (performances given regularly in the Court for a relatively small audience) but grand events with a large number of spectators (nearly 1,500 people). This would get rid of the need for the expensive and somewhat inadequate halls that were built as required (notably for princely weddings).

Louis XV, persuaded by Gabriel and thinking of the future marriages of his three grandsons, eventually commissioned the construction of the Royal Opera. The overall architecture of the hall and building was entrusted to Gabriel who, after numerous modifications, built a theatre which incorporated the greatest innovations of the time, such as the oval plan, staggered levels, and French-style boxes (without partitions). At the last minute the architect abandoned the idea of a fourth row of boxes, replacing them with a colonnade, and the finished design was one of perfect elegance and harmony. The sculpted decoration was entrusted to Augustin Pajou and the paintings were commissioned to Louis-Jacques Durameau. 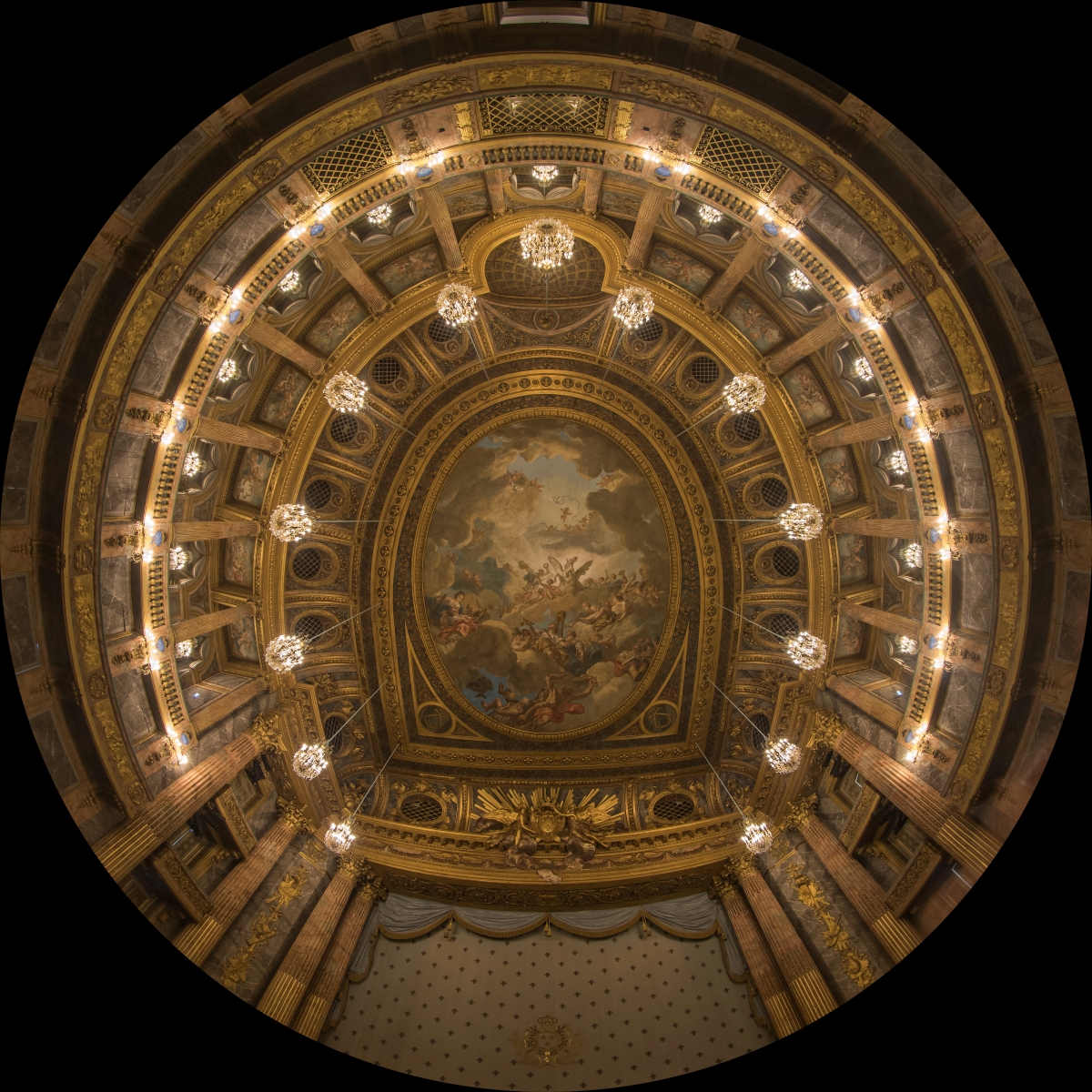 Blaise-Henri Arnoult, First Theatre Technician to the King, was entrusted with installing the mechanics and everything relating to the stage, and he produced a true masterpiece. The specifications called for the space to be capable of being used for multiple purposes, including as a theatre hall, ballroom and a hall for feasts. Using a complex system of movable floors on winches and hoists, Arnoult succeeded in creating an adjustable hall that was built to last. Although it took nearly two days of work to transform the location, it was no longer necessary to constantly build new decoration and machinery each time: everything could be reused as needed.

As a ballroom – its largest and most spectacular configuration – the theatre contained a single-level floor which stretched from the entrance to the back of the stage (over 45 metres). It had lavish “permanent” decoration with movable features and allowed spectators to be seated in boxes on different levels. The decor for balls was not exactly the same as the decoration when it was used as a theatre (as some too hastily wrote). It was noticeably more colourful, with emerald green, blue and silver as the predominant colours.

Inaugurated on 16 May 1770 for the feast for the wedding of the Dauphin and the Archduchess Marie-Antoinette, this extraordinary theatre was used only 40 or so times before the Revolution (the cost, although high, was not the only reason for its limited use). It was used for royal weddings and to honour foreign sovereigns, for whom balls or shows were organised. The theatre was last used for a celebration of the French Court on 18 July 1784, when a ball was given in honour of the King of Sweden Gustave III. The Banquet of the Guards, five years later on 1st October 1789, was the last event held here during the Ancien Régime.

Although the Royal Opera survived the French Revolution, it was emptied of all its furniture, mirrors, lighting and decor. Louis-Philippe commissioned its restoration when he created the Museum of Versailles. The stage and its mechanics were little affected by the works, but the changes made to the hall altered its original layout (especially the King’s private box) and appearance (uniform red paint with gold crosses and framed with false red marble covered over the colours of the 18th century). The theatre was used on a small number of occasions for official performances, such as the one for the inauguration of the new museum on 10 June 1837. In 1855, Napoleon III brought back the lavishness of the Ancien Régime when he held a banquet for Queen Victoria here, and likewise in 1864 on the occasion of a gala performance for the King Consort of Spain. 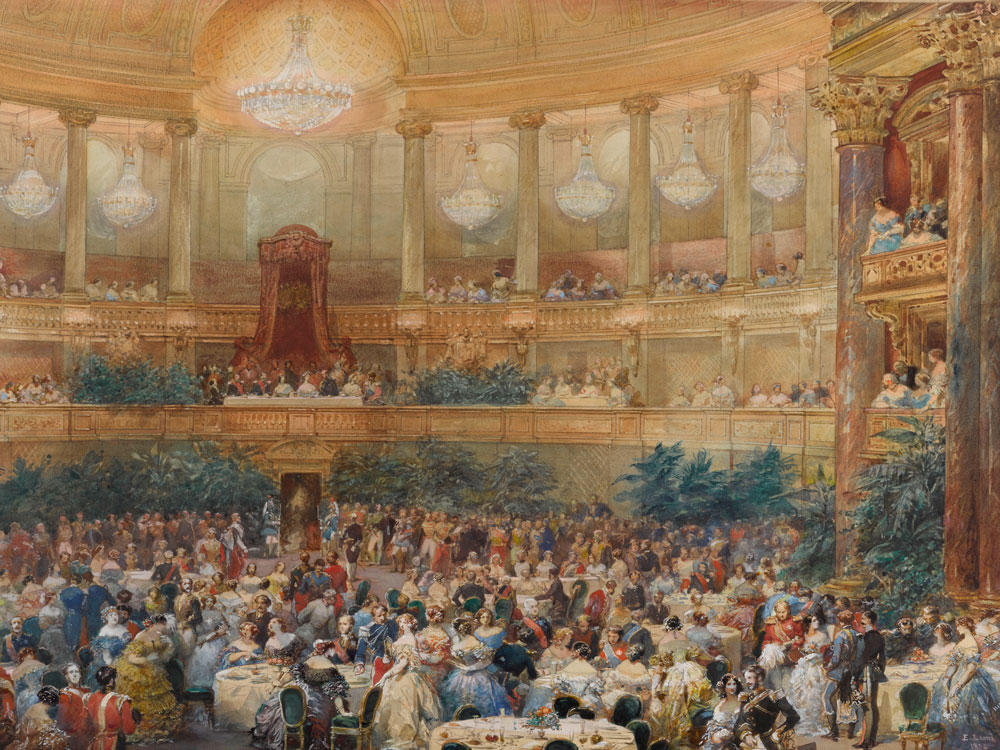 In 1871, after the fall of the Second Empire, the newly-elected National Assembly left Bordeaux, where its headquarters had initially been, in favour of Versailles, where government and major State services had taken refuge during the Paris insurrection. The Assembly was held in the Royal Opera which had been transformed into an assembly hall. The constitutional laws of 1875, which definitively instituted the French Third Republic, established two parliamentary assemblies: the Senate and the Chamber of Deputies. The first was assigned the Royal Opera, while the latter occupied a room built specially for the purpose in the South Wing of the palace. The location’s new purpose led to major modifications such as the installation of a glass roof in place of the ceiling by Durameau. Fortunately, the Chamber of Deputies returned to Paris in 1879 before the complete destruction of the stage. 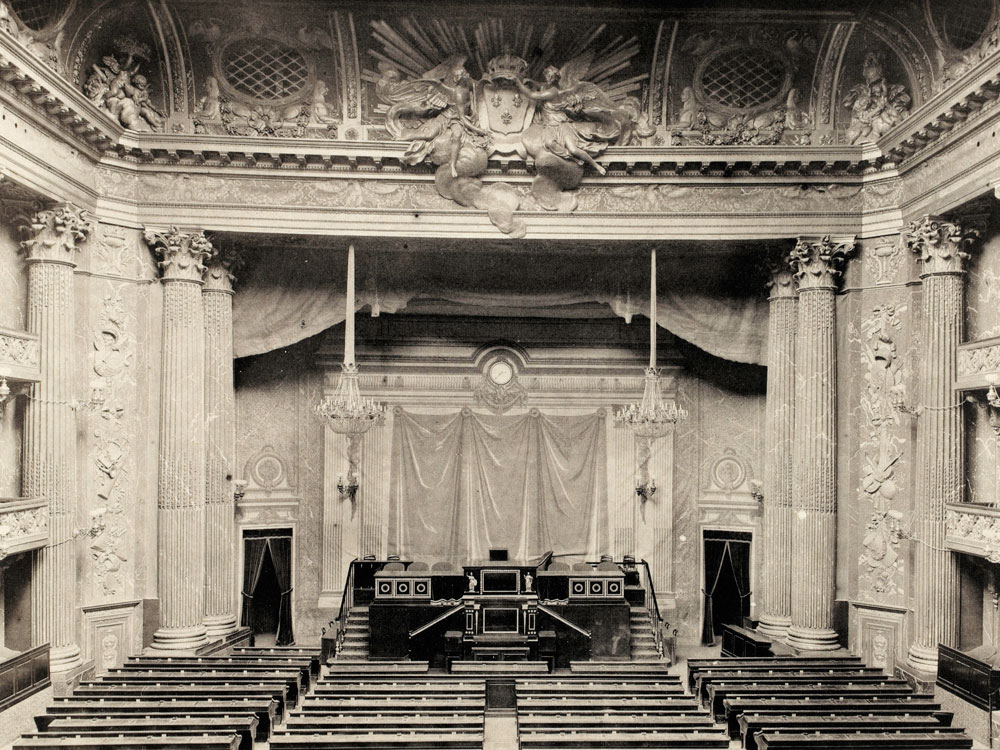 Nearly in ruins at the end of the Second World War, the Royal Opera was thoroughly restored by the architect André Japy and formally inaugurated on 9 April 1957 in the presence of Her Majesty Queen Elizabeth II. Although the restoration work on the hall was a success, the project had disastrous consequences for the stage. Most of the remaining original machinery was destroyed, and a nonsensical full-height fireproof wall and an iron curtain cut off the front of the stage. Major work carried out between 2007 and 2009 fortunately meant that both were removed. 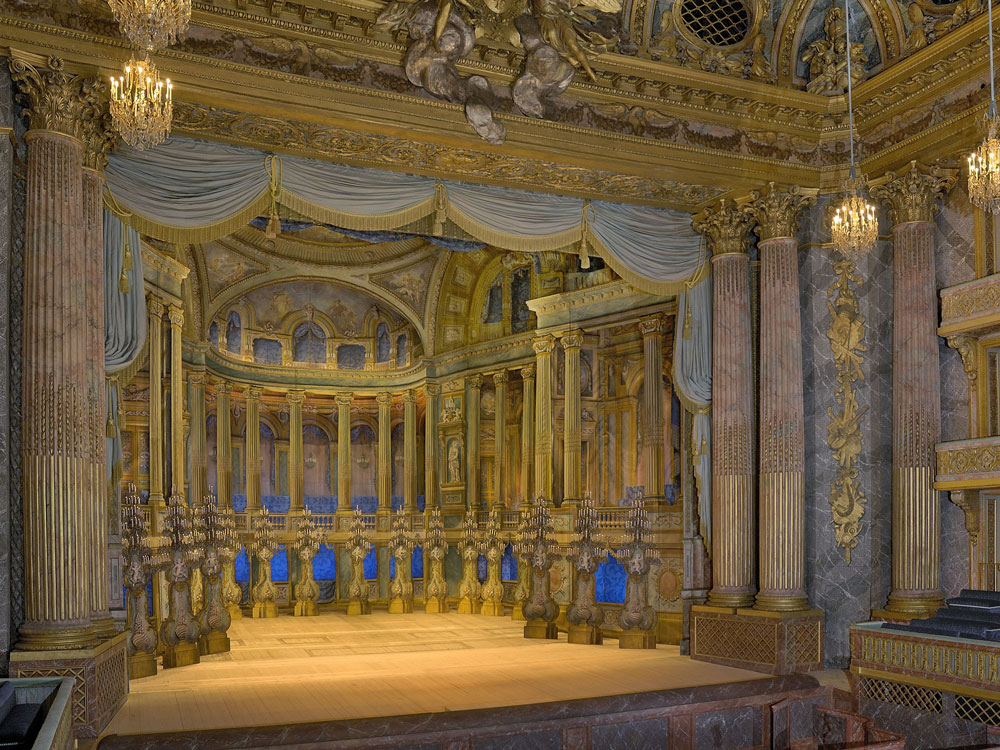 Since 2009 the Royal Opera has hosted a large number of concerts and shows.