In Versailles the queen had a series of small rooms beyond her State Apartments which were reserved for her personal use and for service by her ladies-in-waiting. Marie Leszczyńska used to retire here to read, paint, reflect, or receive private visits. The rooms were decorated with great care and were modified several times throughout the 18th century in accordance with the changes in tastes and requirements of their occupant. Despite everything, these rooms, which were laid out around two small inner courtyards, could not be extended. Marie Antoinette acquired more space by fitting out new rooms on the floor above (such as a Billiard Room) and even had a miniature summer apartment built on the ground floor, which opened onto the Marble Courtyard and contained a bedchamber, library and bathroom.

The Queen’s State Apartments are currently undergoing work, and there are no guided tours scheduled for these rooms.

This room was built for Marie Leszczyńska in 1735 and was modified several times by Marie-Antoinette. Its current appearance dates from the last series of changes carried out for the queen by Richard Mique (1784). In place of the silks hanging previously in the room, Mique proposed a more contemporary look of wood panelling made by the Rousseau brothers with decoration from antiquity, a style that had recently come into fashion thanks to the recent discovery of the remains of Pompeii and Herculaneum.

Most of the furniture and objets d’art currently in the room once belonged to the queen, including the commode, one of Riesener’s finest creations, which was delivered for her chamber in Marly, and the “Chinese-style” Sèvres vases on top of it, which came from her apartment in Saint-Cloud. 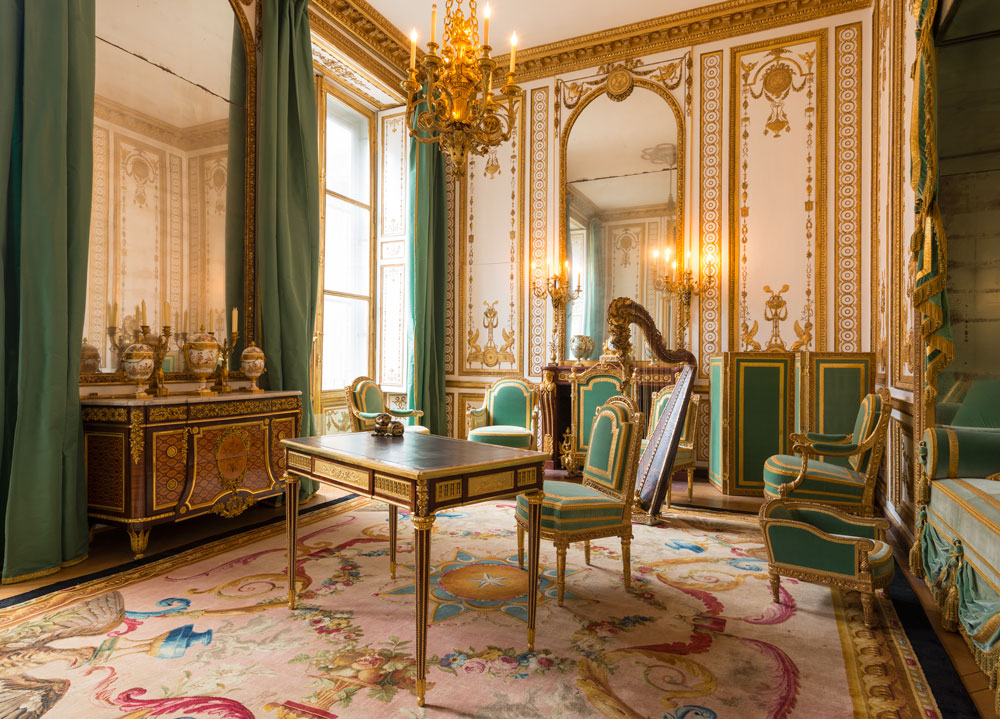 The unusual form of this boudoir with its irregular walls allowed those in the service of the queen to pass from the large chamber to the other rooms without disturbing her, as she often came here to rest at midday – hence the name “Méridienne”. In 1781, after Marie-Antoinette had finally given birth to an heir, the definitive wooden panelling decoration was added. The motifs were carved by the Rousseau brothers and are repeated in the bronze work by Gouthière on the glazed doors. The allegorical references celebrate the young prince (the Dauphin), the royal couple (the king is symbolised by the eagle of Jupiter and the queen by the peacock of Juno) and the couple’s love (garlands of roses, bows and arrows). 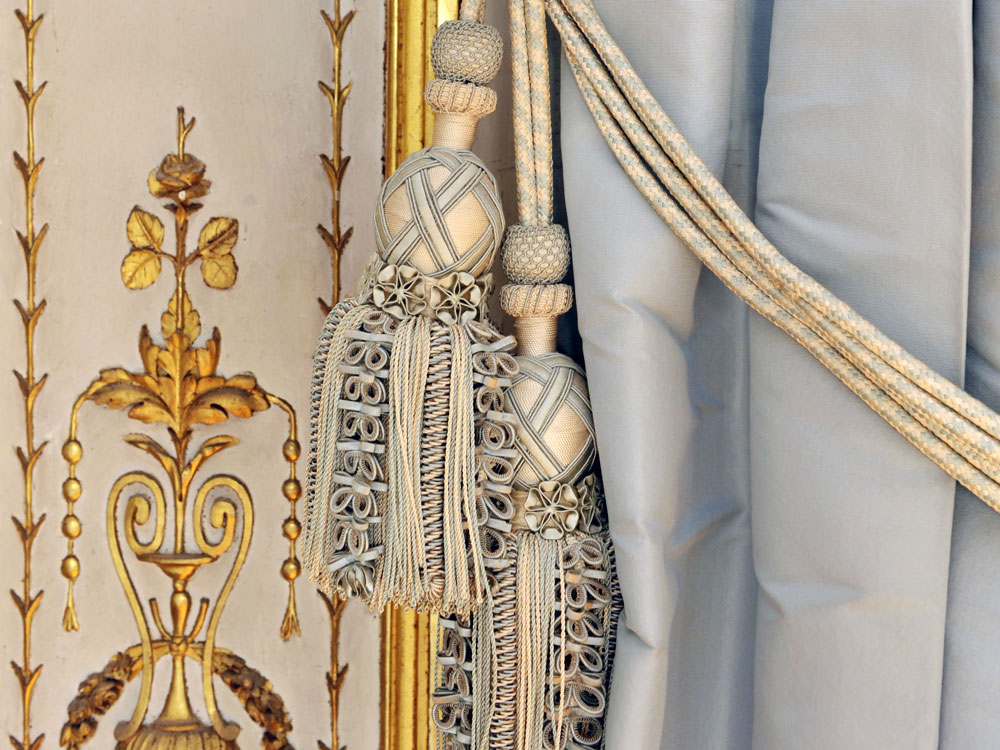 Marie-Antoinette had a large collection of books that were moved to Paris during the Revolution and, for the most part, are now currently conserved in the Bibliothèque nationale de France. This room was built for the queen between 1779 and 1781 by her architect Richard Mique. It was filled with cupboards with glass doors, whose shelves could easily be adjusted in height thanks to an ingenious rack and pinion system.

Marie-Antoinette’s book collection continued to grow, and the library soon required an extension which was built in the adjoining room in 1783. The queen also had a library in Trianon, most of the books from which are currently conserved in the municipal library of Versailles. 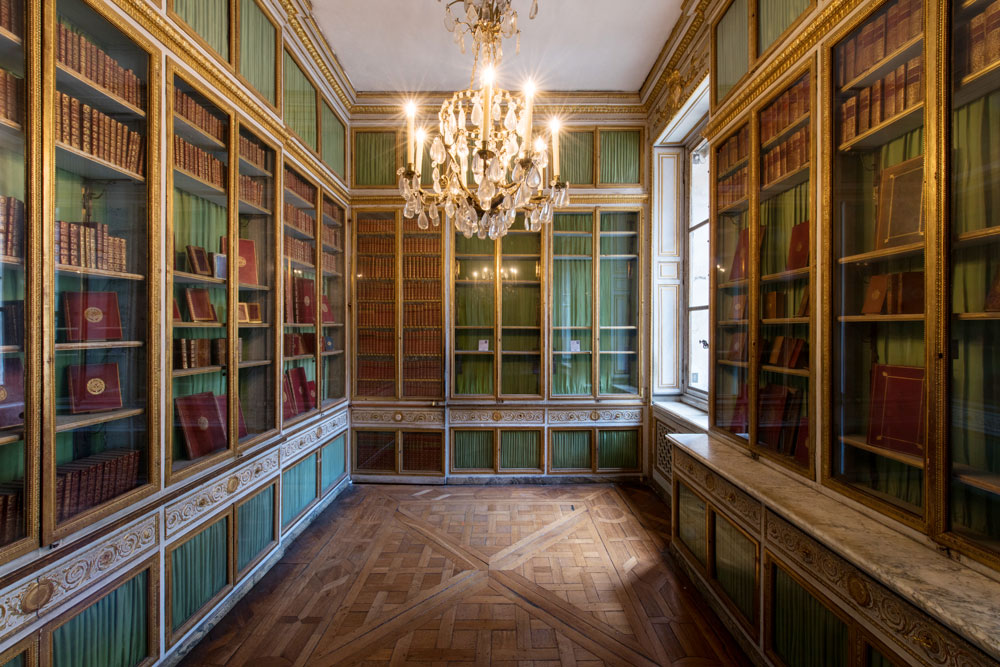 The queen had other rooms at her disposition on the second floor. One of these was the Billiard Room, in which the silk furnishings have been reproduced and the sofas delivered by Jacob replaced. The other rooms, whose decoration was less elaborate, currently house part of the museum’s collections relating to Marie-Antoinette. 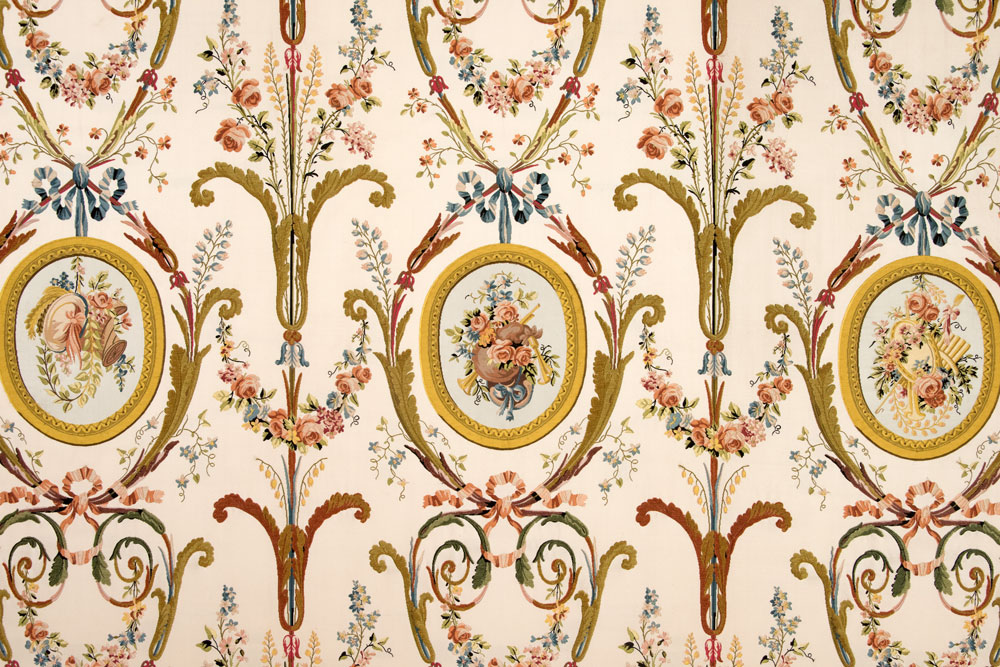 The intimate palace of Marie Antoinette