These ground-floor apartments opened onto the Midi Parterre and were reserved for members of the royal family. Their current layout dates from the period when they were lived in by Louis XV’s son, Louis, Dauphin of France, and his second wife, Maria-Josepha of Saxony, between 1747 and 1765. Just before the start of the Revolution they were occupied by the Dauphin, the eldest son of Louis XVI and Marie-Antoinette, and his tutor the Duke of Harcourt.

The Dauphine’s First Antechamber takes up part of the former chapel which once occupied the full height of the first and ground floors. The chapel was demolished in 1682 and replaced by an apartment, which was occupied in turn by the Duchess of Montpensier, known as “la Grande Mademoiselle” (1692-1693), the Grand Almoner of France (1693-1706), and the Grand Master of the King’s Clothes Storehouse (1706-1712). In 1712 the apartment was turned into a guard room for the Duke of Berry, Louis XIV’s grandson. On the death of the prince on 4 July 1714 this room became part of the Maréchal de Villars’s apartments. In 1747 it was reduced to a third of its original size and became the Dauphine’s First Antechamber.

The paintings in the room evoke the regency of Philippe d’Orléans, the ascension and the coronation of Louis XV.

This room was originally destined for the chapel that was eventually built in the preceding room. Initially it was divided into four separate rooms and until 1693 was part of the Duchess of Montpensier’s Apartments. It then became the vestibule for the Grand Dauphin’s Apartments, later lived in by his eldest son, the Duke of Burgundy. From 1712 to 1714 it was the Duke of Berry’s antechamber, then became part of the Maréchal de Villars apartments before finally becoming the Dauphine’s second antechamber in 1747.

The size of the Dauphine’s Great Chamber dates from when the room served as a guard room for Louis XIV’s son. Maria-Josepha of Saxony came here with the women of her entourage to talk or play games. As in the rest of the apartments, the room was newly decorated for her, but the decoration was removed during the 19th century, under the orders of Louis-Philippe, to create a paintings room. The large console table was preserved and set beneath a mirror whose frame was reproduced, and on top of it sits a barometer built for the future Louis XVI, who occupied the apartment from 1766 until he ascended to the throne in 1774. On the “fire-coloured” wall, which is a modern evocation of the wall covering described in the inventories (crimson brocade woven with gold), hang portraits of ministers and members of the royal family from the start of the reign of Louis XV, as well as of Louis XV himself, depicted in coronation attire by Hyacinthe Rigaud (1715). 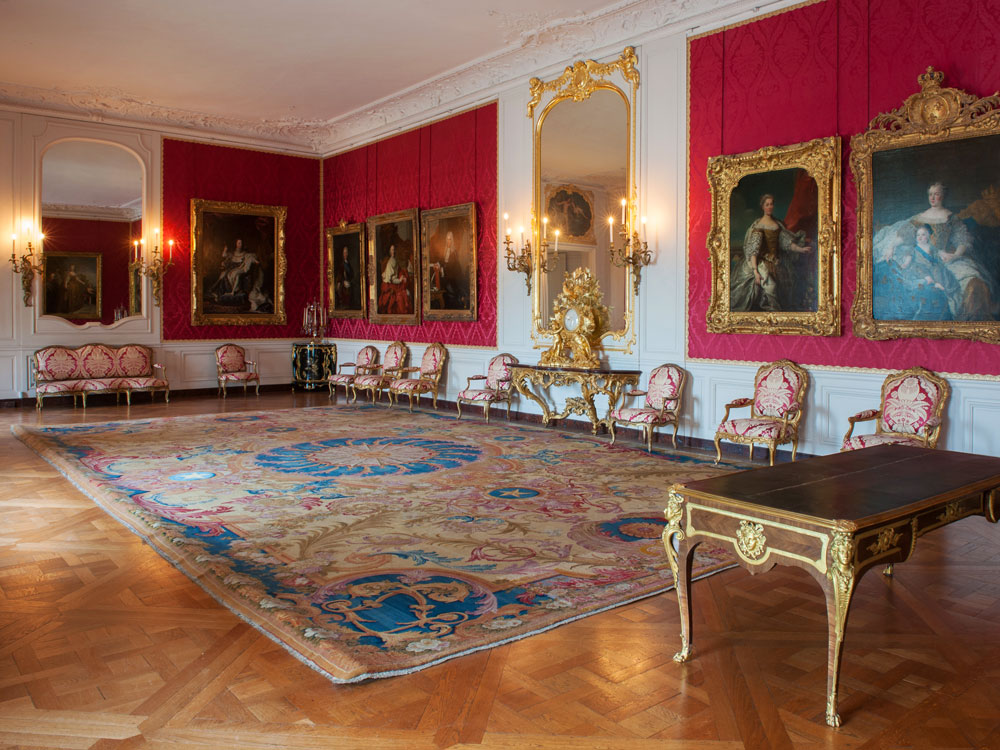 It was in this room that the Dauphine Maria-Josepha of Saxony, the daughter of Augustus III of Poland and wife of Louis XV’s son, gave birth to three future kings of France: Louis XVI, Louis XVIII and Charles X.

Nothing remains of the decoration made for the Dauphine in 1747 but the paintings over the doors by Jean Restout. The original bed was replaced by a Lit à la polonaise (a bed with a canopy on the form of a dome and supported by four pillars) attributed to Nicolas Heurtaut. On either side of the bed are works depicting the Dauphine’s half-sisters, Louis XV’s daughters, including Madame Henriette as Flora and Madame Adélaïde as Diana by Jean-Marc Nattier. There are also religious scenes, such as Saint Joseph holding the child Jesus on his knees (1749) by Louis de Silvestre and The Nativity (1728) by Noël-Nicolas Coypel. 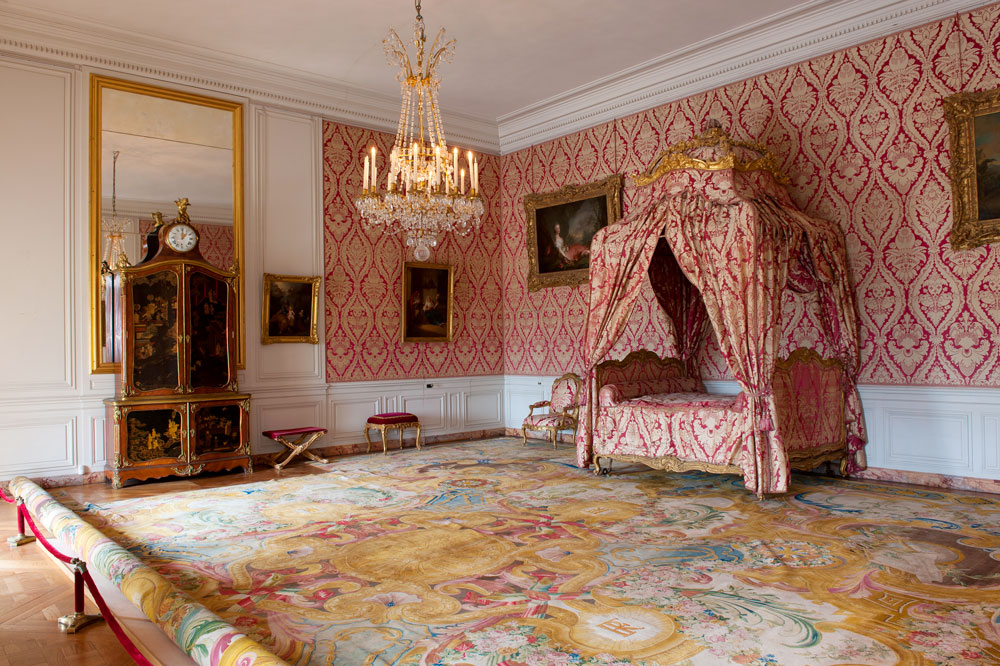 For a long time this small chamber and the one next to it formed a single room, which was initially an antechamber for Monsieur, Louis XIV’s brother, and then for the Grand Dauphin. It then became the latter’s chamber in 1693. It was also the Regent’s chamber, then Louis XV’s son’s chamber, but was later divided in two in 1747 to create a private chamber for the Dauphine  and a cabinet de retrait for her husband. The young couple’s apartments were thus connected via their most private rooms, which preserved, to a certain extent, their privacy.

Only part of the original attractive wooden decor remains, with its natural finish using vernis Martin. It has been completed and the decoration over the door depicting the Four Seasons, painted by Jean-Baptiste Oudry for this room in 1749, has also been returned to its position. Next to the niche, which once contained a sofa, glass doors lead to a series of small rooms opening onto the inner courtyards, including a private chamber, an oratory and a bathroom.

Actually in the Dauphine's Apartment

A taste of Marie Leszczynska

This pleasant room once served as a cabinet de retrait and study for Louis XV’s son. It was later used by the latter’s own son, the Dauphin and future Louis XVI, when he lived in his mother’s former apartment.

The wood panelling dates from 1755. The angels playing music in the cornice reveal the tastes of Louis XV’s son, who sang, played the organ and often played chamber music with his sisters. Over the door are four naval paintings by Joseph Vernet. On the commode, made specially for this room by Mathieu Criaerd, is a bronze clock by Jean-Joseph de Saint-Germain. The flat-top desk was delivered by Simon Œben and Roger Vandercruse in 1756 for Louis XV and was later also used by his son. 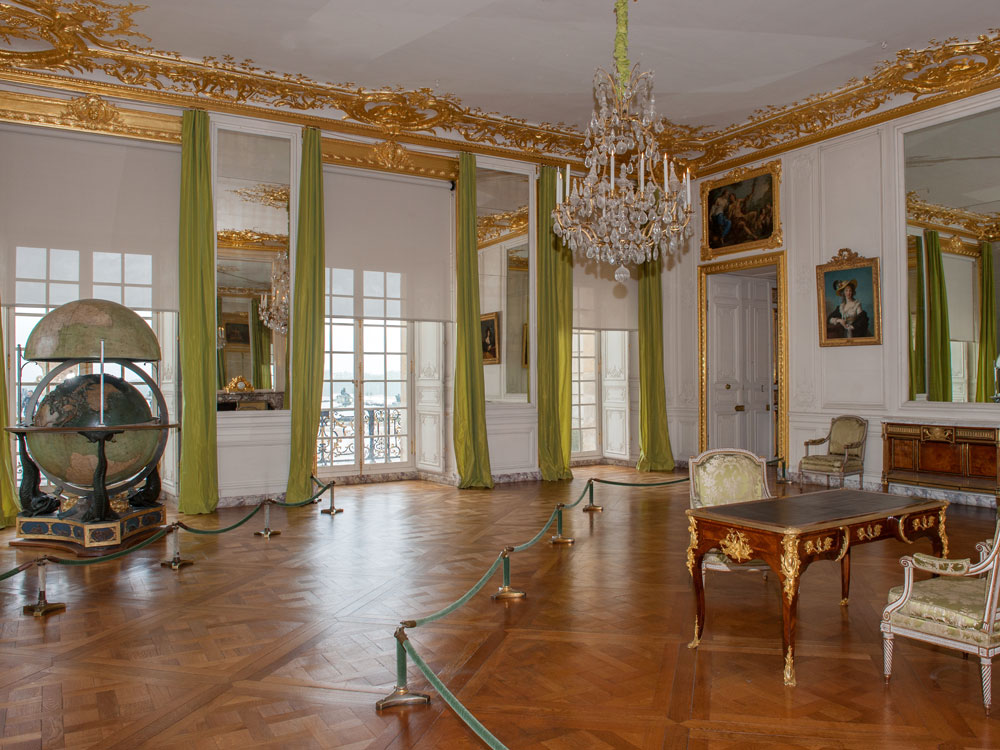 There were originally three rooms here: Monsieur’s chamber and study, and his wife Madame Palatine’s study. These rooms were later used by the Grand Dauphin, who combined them in 1693 to form the large room that we see today. It was redecorated in 1747 for Louis XV’s son, but the original fireplace and carved woodwork by Verberckt nevertheless remained.

Louis XV’s son asked Nattier to depict his sisters, Élisabeth, Henriette, Adélaïde and Victoire, with attributes of the four elements for the decoration over the doors. These paintings are now in the museum of São Paulo (Brazil). In their place are works by Charles-Joseph Natoire, originally from the princely apartments in Versailles and Marly, which no longer exist. The celestial and terrestrial globe, containing a second globe in relief detailing the surface of the earth, was made by Edmé Mentelle in 1786 upon the request of Louis XVI, who wanted it for the education of his son. It was painted by François Vernet and gilded by Jean-Nicolas Gardeur.

This room’s function, shape and decoration date from 1747. Previously there had been a smaller room here, which was first Monsieur’s gilded room, where he displayed all the paintings in his collection, and then the Regent’s study, in which he died in 1723. It was Gabriel who provided the sketches for this chamber, as he had done for all the decoration work carried out when he was First Architect to the King (from 1742 to 1775). In accordance with custom the alcove was hung with silk, while the rest of the room was decorated with carved oak wood panelling (in this case made in the studio of Jacques Verberckt, who made most of the wood panelling for Versailles at the time). It was embellished with white and gold, with a white background and gold motifs.

The Dauphin’s bed has been lost, but it has been replaced by a Lit à la duchesse. This style of bed is characterized by the canopy, which was not supported by columns but rather suspended from the ceiling. The one here was made in around 1740 for the Marquise de Créquy, and the fabric is decorated with embroidered scrolls and medallions. The decoration on the headboard shows The sleep of Endymion. On the console table there is a terrestrial globe and an armillary sphere by Guillaume de l’Isle (1705), and a portrait of the Dauphine Maria Teresa Rafaela of Spain, the first wife of Louis XV’s son, hangs on the wall.

Two thirds of this room once constituted the former mirror room belonging to the Grand Dauphin, which was one of the most luxurious rooms in his apartments. The marquetry wooden flooring was decorated with a motif composed of the intertwining cyphers of the prince and his wife. The ceiling and walls were entirely covered with mirrors set in marquetry frames of ebony, tin and copper, in which glistening reflections of the gems and precious stones, porcelain and rock crystals placed on the gilded wood console tables could be seen. The room was extended in 1747, and its fantastic decor was removed and replaced by simple wood panelling. The collection of paintings in this room is by Jean-Marc Nattier and includes portraits of Mesdames, Louis XV’s daughters.