The Queen’s Apartments, which overlook the Midi Parterre, are a series of rooms whose layout is identical to that of the King’s State Apartments to the north. Queen Maria Theresa, Louis XIV’s wife, was the first person to live in these apartments, but she died not long after moving in, in 1683. The layout of the first floor of the Palace was perfectly symmetrical, with the north belonging to the king and the south to the queen. This was soon changed, however, by the king, who decided to set aside all the rooms around the Marble Courtyard for his new apartments. The queen’s space became limited to her State Apartments – which were modified by Marie Leszczyńska and later Marie-Antoinette – and to a few smaller rooms for more private use situated behind the official apartments, overlooking two inner courtyards.The current tour route passes through the rooms in the opposite direction to the traditional order, since it starts in the bedchamber and ends in the Queen’s Guard Room, which originally marked the entrance to the Queen’s Apartments during the Ancien Régime.

The Bedchamber is the most important room in the apartments and is where the Queen spent most of her time. It was where she slept, often with the king, and in the morning she received guests here during and after her toilette which, like the King’s getting-up ceremony, was a courtly affair controlled by strict etiquette.

The decoration in the room still reflects the three queens who once occupied it. The partitions on the ceiling date back to the reign of queen Maria-Theresa, while the greyscale painting by Boucher and the wood panelling were added for Marie Leszczyńska. These elements survived the reign of Marie-Antoinette, who replaced the furniture and fireplace and put up paintings of her mother Empress Maria-Theresa and her brother, Emperor Joseph II.

The jewellery cabinet commissioned to Schwerdfeger by Marie-Antoinette has been placed in its original position in the alcove to the left of the bed. Other pieces of furniture which were lost have been replaced by similar items, such as the sofa delivered for the Countess of Provence, the queen’s sister-in-law. The fabrics hanging on the bed and walls were re-woven in Lyon using the original patterns and the bed and balustrade have been remade using ancient documents. 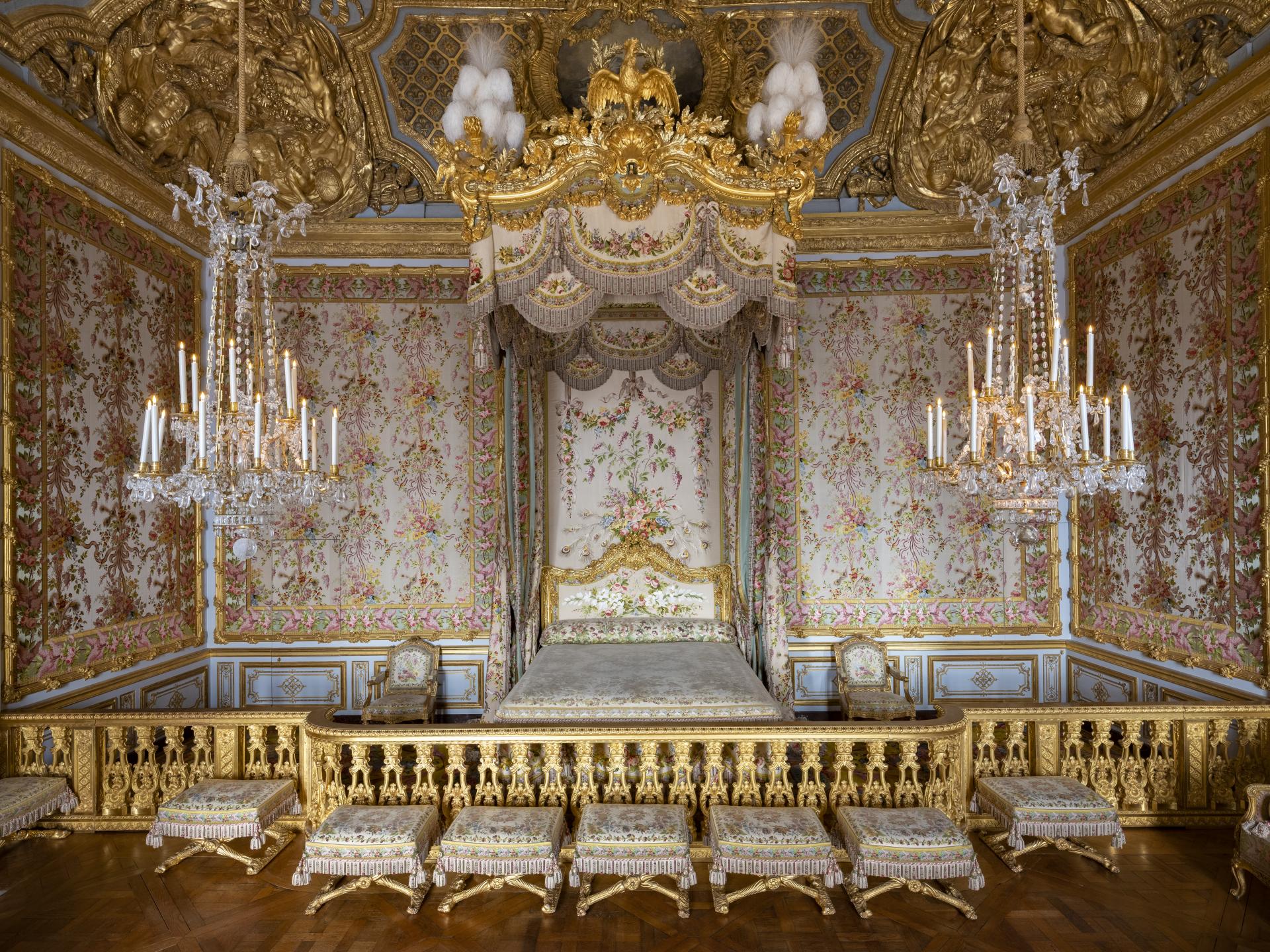 This room was used as a second antechamber. Queen Marie Leszczyńska held formal audiences here, seated under a canopy, as well as her Circle, the name given to the times spent in orderly conversation by the ladies of the Court. Marie-Antoinette, who was little fond of the Louis XIV style of the room, entrusted her architect Richard Mique with completely redecorating it, except for the ceiling which was kept. The walls were hung with apple-green damask bordered with a wide gold stripe. New, extremely modern and refined furniture was delivered. For example, when making the majestic commodes and corner cupboards for the room, the cabinetmaker Riesener abandoned the customary marquetry in favour of large panels of mahogany. Likewise, the gilded bronze decoration and the small tables in Bleu Turquin marble in this magnificent collection matched the decoration on the fireplace, which was also new. 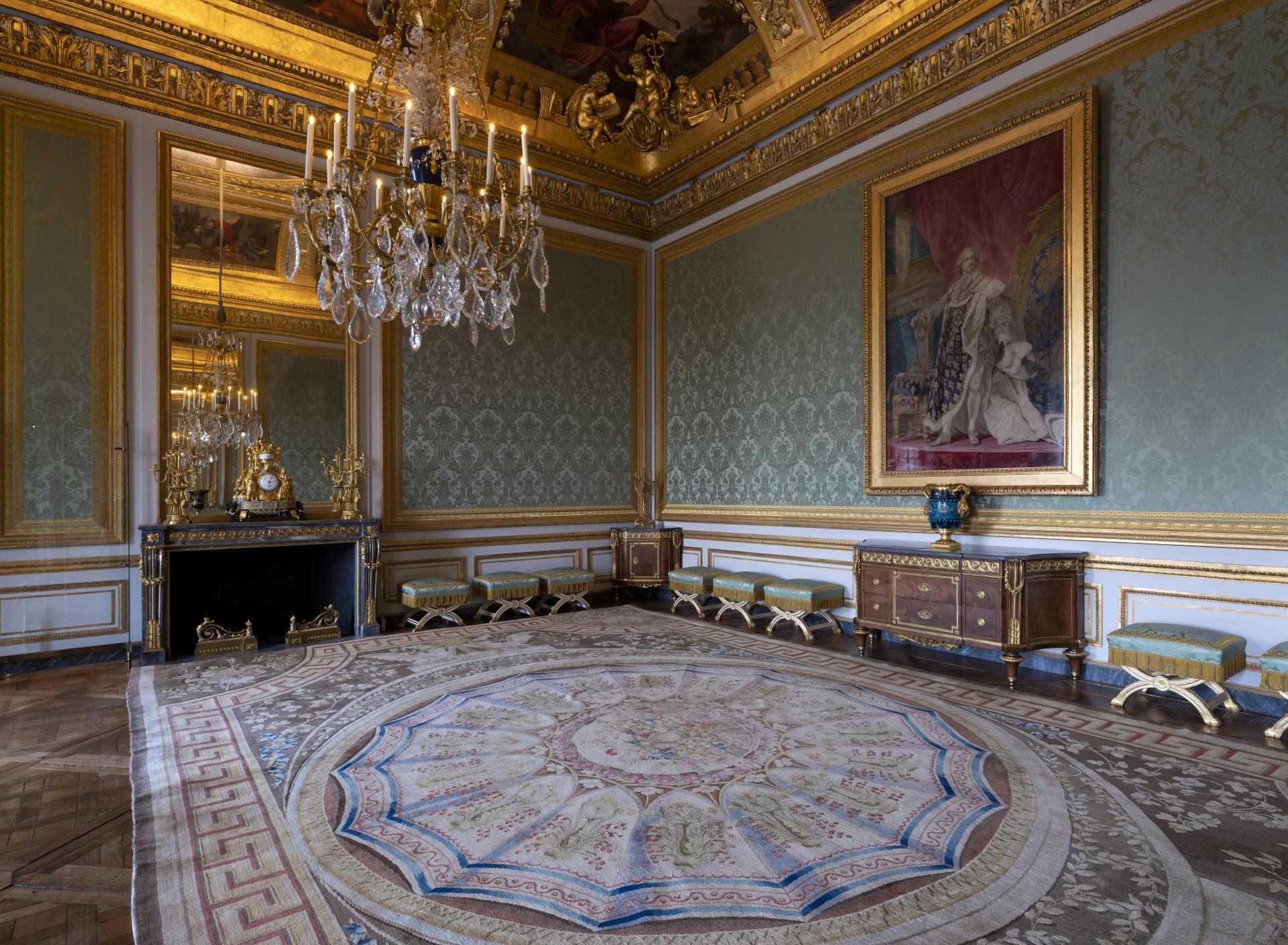 Traditionally, public meals at the Royal Table, taken by the king and the royal family, were held in the Queen’s Antechamber. This lavish ceremony attracted a large number of curious onlookers. Only the members of the royal family were allowed to dine, while privileged duchesses, princesses or those holding important positions sat in front them on stools, and the other ladies and people whose rank granted them entry or who were admitted by the ushers stood around them. Louis XIV adhered strictly to this ceremonial performance almost every evening, whereas Louis XV more often preferred private dinners and Louis XVI and Marie-Antoinette only ate at the Royal Table once a week. One account at the time reported that “the King ate heartily, but the Queen didn’t even remove her gloves or unfold her serviette, which was a great mistake”. To brighten up what she considered to be a great chore, Marie-Antoinette requested that music was played during meals at the Royal Table, and a platform for musicians was installed in the room to this end.

The Queen's Royal Table Antechamber was restaured between 2009-2010 thanks to sponsorshipf from Martell & Co. 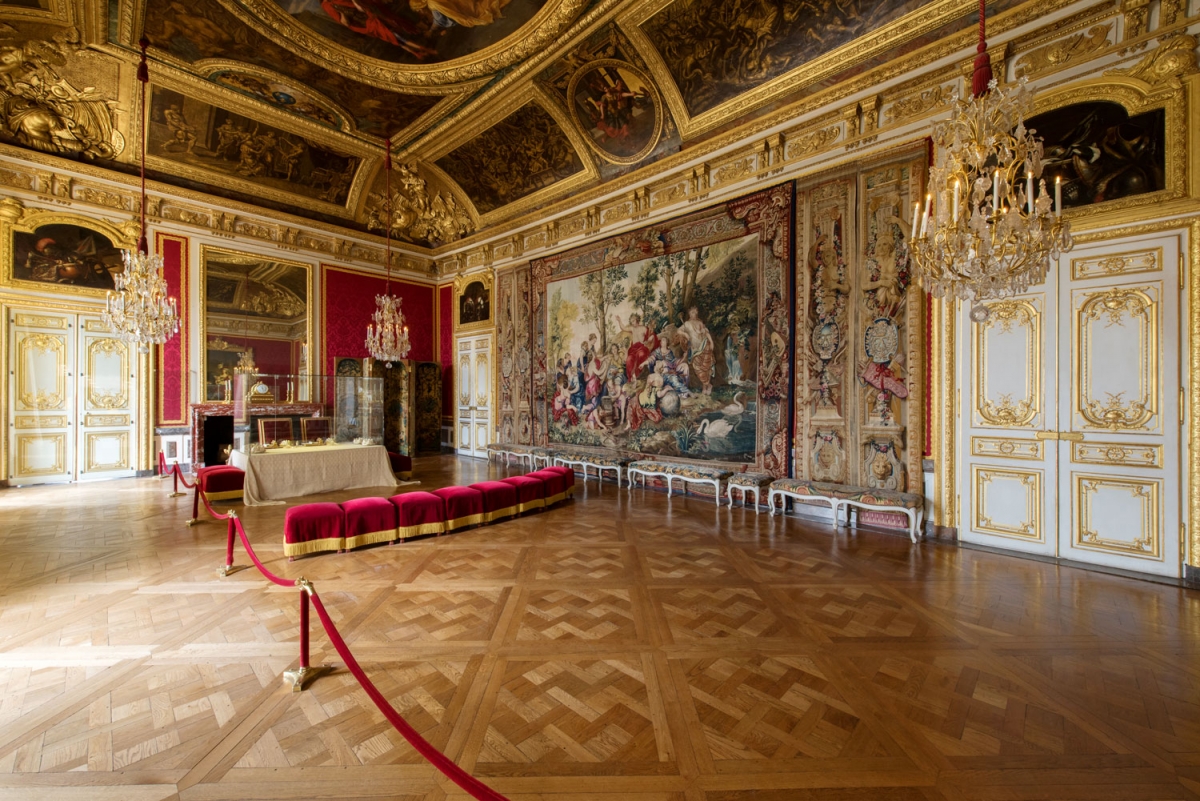 Entry to the Queen’s Apartments from the Queen’s Staircase, also called the “Marble Staircase”, was controlled by the Guard Room, where 12 of the Queen’s Guards were on duty day and night. At Versailles only the king, queen and dauphin were allowed to have a personal guard composed of soldiers from the four elite companies of the King’s Guards. The large adjoining room, today called the “Coronation Room”, was assigned to them and served as a Guardhouse.

The Queen’s Guard Room is the only room in the Apartments in which the 17th-century decoration has been fully preserved, since the Queen never spent time here and there was therefore no need to modernise it. For this reason, it still contains the marble panelling characteristic of the State Apartments’ original condition, as well as the paintings which were brought here in 1680 from the old Jupiter Room, later replaced by the War Room.

It was also here that a group of rioters tried to enter the Queen’s Apartments at dawn on 6 October 1789. One of the ladies in waiting was warned by one of the queen’s guards and managed to bolt the door to the Royal Table Antechamber and help the queen hurry through to the king’s apartments via her private chambers. 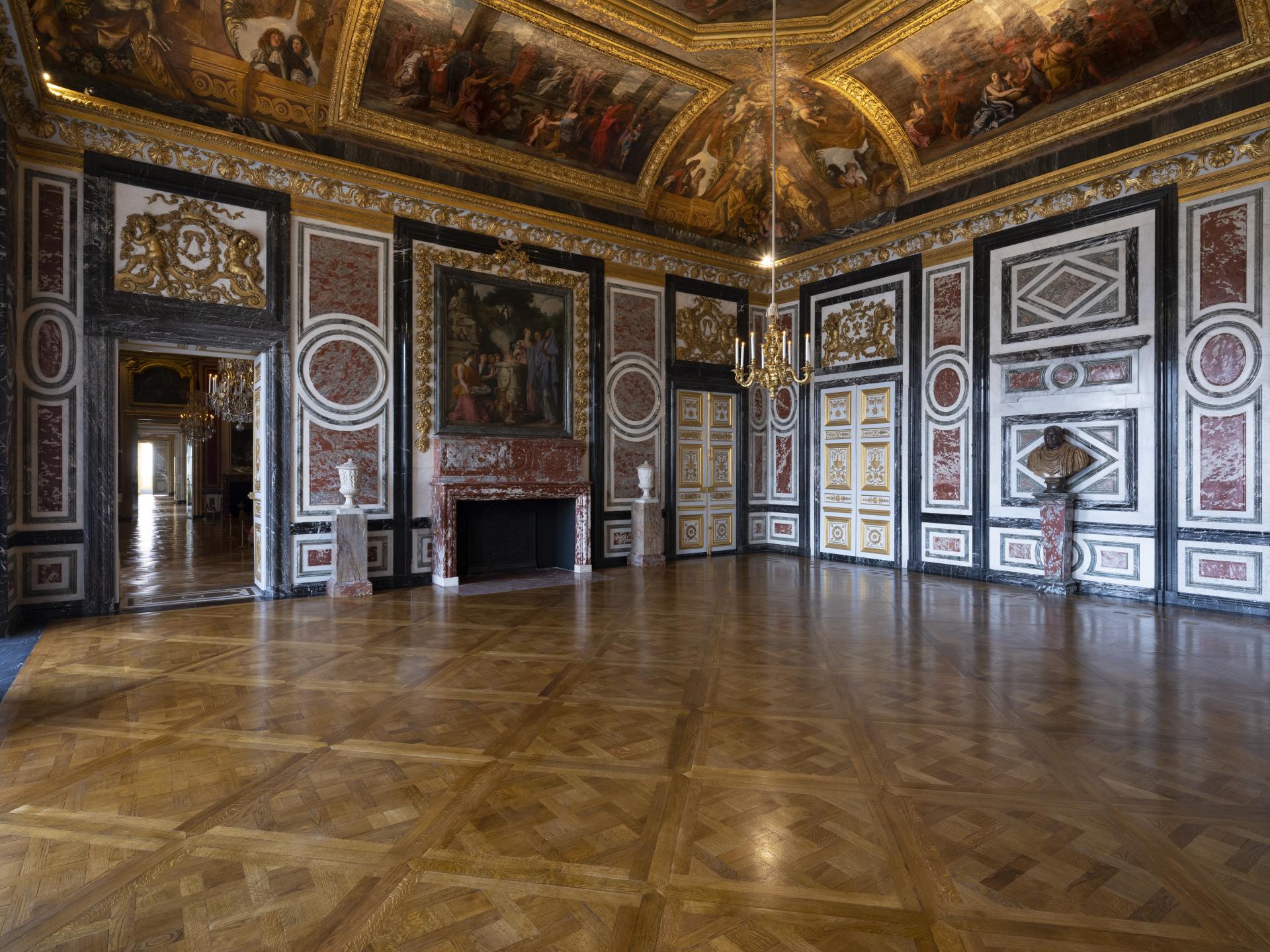