Louis XIV made several adjustments to his Private Apartment. The most major changes were carried out in 1701 when the King’s Chamber was moved to its current location, in the centre of the façade of the Marble Courtyard. As in all royal residences, the King’s Apartment contained the customary succession of rooms: a Guard Room, two antechambers, a chamber and a cabinet. Access to these rooms was subject to strict hierarchy and controlled by etiquette. Beyond them was the king’s private domain, which, as a matter of principle, no one could enter unless invited.

Like in all royal residences, the Guard Room marks the entrance to the King’s Apartment. Its decoration is deliberately understated. The king’s guards were stationed here to ensure the sovereign’s protection and were changed over every 24 hours. During the day their camp beds were folded up and stowed away behind screens. The little sculpted decoration there is contains references to fighting, in tribute to the room’s role. A painting by Parrocel that hangs over the fireplace, Battle featuring the king's guards (1684), honours the guards. 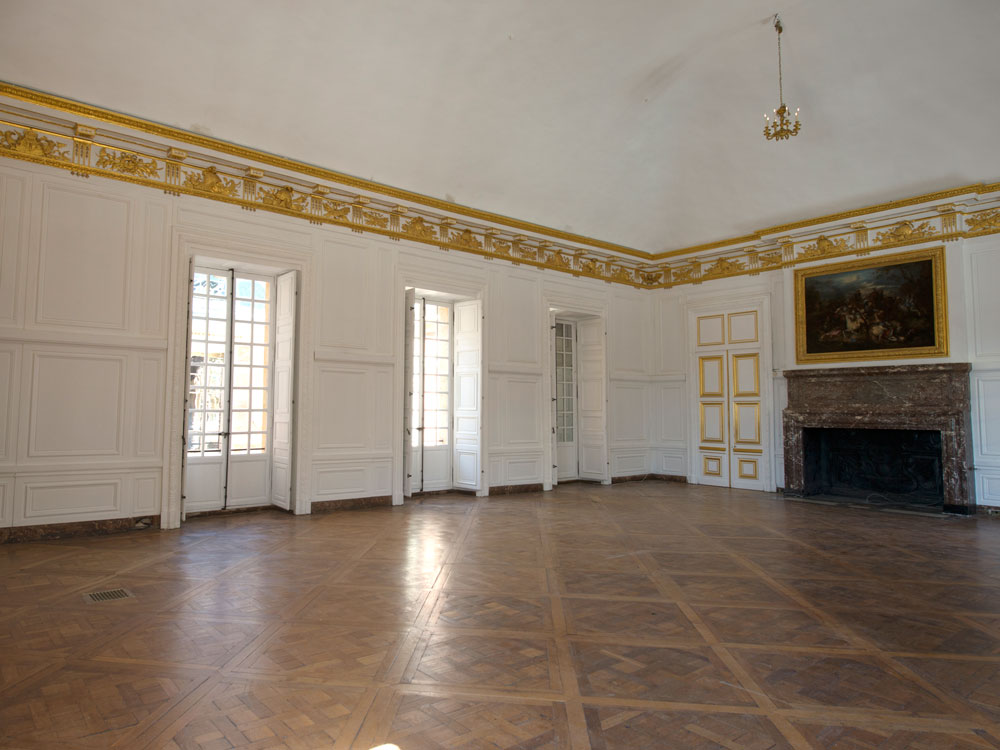 The Antechamber of the Great Dining

As visitors continue through the apartment, the decoration becomes more elaborate. The Antechamber of the Great Dining was where Louis XIV used to dine in public from 1690, after the death of the Queen and the Dauphine. Every evening a table was laid in front of the fireplace, and the king sat with his back to the hearth. The room is decorated with a series of 11 battle paintings by Joseph Parrocel, and a 12th depicting the Battle of Arbela, by Guillaume Courtois. 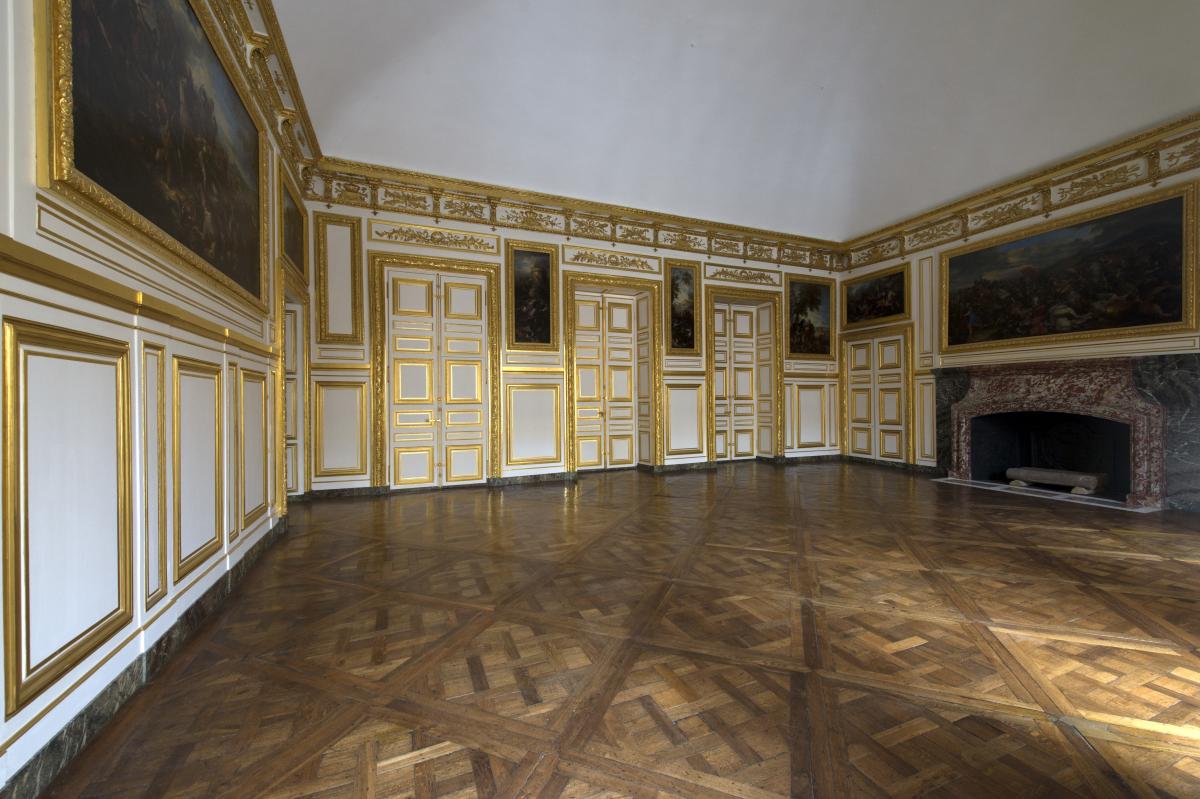 The second antechamber in the royal apartment, the Bull’s Eye Antechamber, is named after the circular window which brings light into the room on the southern side. This room was originally divided into two by a partition wall and was composed of the antechamber and the King’s Chamber, in which the bed was placed in the left-hand corner next to the current fireplace. Frustrated by the small size of these rooms, which could barely contain all the courtiers in attendance when he got up and when he went to bed, Louis XIV decided to knock down the wall in 1701 and combine the two rooms into one. He moved his bedroom into the following room, which at the time was just a salon.

The Bull’s Eye Antechamber occupies a strategic position in the Royal Apartment. To the north it leads to the King’s Chamber; to the west, the tall glass windows open directly onto the Hall of Mirrors , enabling courtiers to enter and leave the King’s Apartment; a door in the southern wall to the right of the window leads to the Queen’s Apartment, while a staircase in the eastern wall leads to the Dauphin’s Apartment on the ground floor.

As in the preceding rooms, the decoration in this room testifies to changes in the king’s personal taste. With the start of the new century he abandoned rich marble decoration and painted ceilings and replaced them with white ceilings and gilded woodwork. A frieze depicting children’s games runs along the cornice.

The Bull’s Eye Antechamber is temporarily closed to the public due to works. 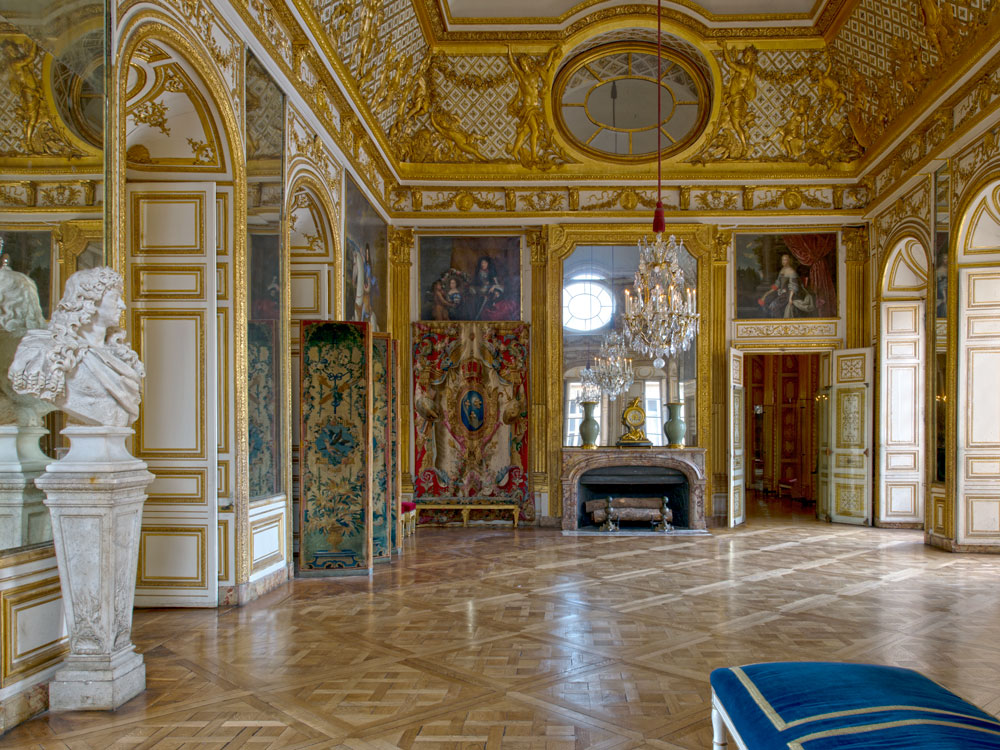 Versailles over the centuries

Changes to the palace in 3D

In 1701 Louis XIV moved his bedchamber into the large room covering nearly 90m² and situated in the centre of the eastern façade of the Palace. Three tall doors at the end of the room leading to the Hall of Mirrors were sealed. Above these, Nicolas Coustou created the allegorical stucco of France watching over the King’s sleep, which hangs over the bed. The King’s Chamber is the most important and symbolic room in the Royal Apartment and was used at several times of the day: during the king’s “getting up” and “going to bed” ceremonies, when he dined in private, and when he received certain courtiers or ambassadors. Louis XIV died in this room on 1 September 1715 after a reign of 72 years.

The very fine brocade decor of gold and silver on a crimson background is complemented by the paintings chosen by Louis XIV himself: four paintings depicting the authors of the gospels, and The Tribute to Caesar, by Valentin de Boulogne; Hagar in the wilderness by Giovanni Lanfranco; Saint John the Baptist by Giovanni Battista Caracciolo, which is above the door; Mary Madeleine by Domenico Zampieri; and two portraits in the style of Van Dyck. Above the fireplaces are a bust of Louis XIV by Antoine Coysevox, a clock-barometer and four candelabras which belonged to the Count of Provence, Louis XVI’s brother.

The King's Chamber is temporarily closed to the public due to works.

The Council Room is adjacent to the King’s Chamber and opens onto the Hall of Mirrors. It wasn’t until 1755, during the reign of Louis XV, that it took on its current form when two rooms were combined: the King’s Cabinet, where Louis XIV held his council meetings, and the Cabinet des Termes (a more private space, where the king spent time with his family or certain guests after dinner). The chamber is decorated with fine woodwork crafted by Antoine Rousseau and based on drawings by Ange-Jacques Gabriel. The elaborate motifs illustrate subjects addressed by the king during council meetings, such as war and justice. The decor also includes a Rococo-style clock (1754), a bust of Alexander the Great in porphyry, and two vases of Mars and Minerva in Sevres porcelain and chased bronze by Pierre-Philippe Thomire (1787). The room was also used for official presentations, which were a necessary rite for admission to the Court. Madame Du Barry, among others, was thus presented to the King on 22 April 1769. 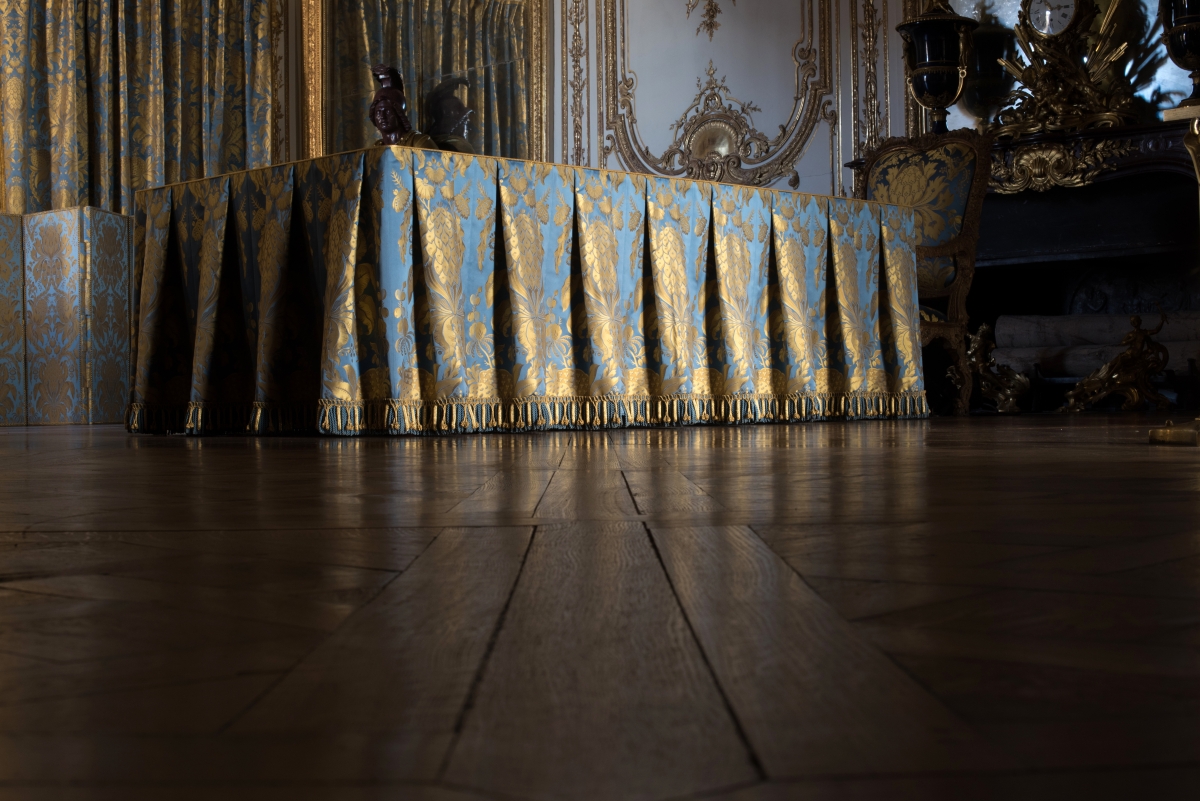