Choreographed by Bartabas and the equestrians of the Académie équestre de Versailles, La Voie de l'écuyer - Opus 2022 illustrates the spirit and sensibility of the school-company, which has been based in the Grande Ecurie of the Château de Versailles since 2003.

Every weekend, Saturday at 6pm and Sunday at 3pm and some Wednesdays at 3pm during school holidays. 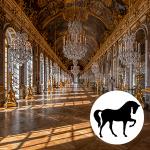 This ticket gives access to the Palace within half an hour of the chosen time and to the show of the Equestrian Academy of Versailles. 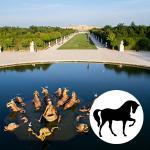 This ticket gives access to the whole of the Estate for 2 consecutive days and also to the Equestrian Show presented at the Equestrian Academy of Versailles.