For the 300th anniversary of the coronation of King Louis XV, the Palace of Versailles is paying homage with an exceptional exhibition. Through more than 400 works, discover Louis XV beyond his function as monarch and learn more about his passions, his family life and his influence on the arts of his time. Born in 1710 in Versailles, Louis XV was the son of the Duke of Burgundy and Marie-Adélaïde of Savoy, as well as the great-grandson of Louis XIV. Heir apparent after the death of his father, he became king at the tender age of five after the death of the Sun King on 1 September 1715.

The exhibition opens with an introduction to Louis XV as a man, looking back on his relations with his family and his entourage.
His childhood, marked by grief, contrasts with his later life with his large family, where he delighted in his role as a father. Women also occupied a central place in the King’s life -- not only his wife  Marie Leszczynska, but also his many mistresses, some of whom left their own mark on the period. The exhibition also explores Louis XV’s discreet, melancholy nature, a man who preferred the intimacy of his private apartments. There, he received his inner circle, who enjoyed his every confidence.

The King’s tastes and passions

The tour continues with Louis XV’s passion for sciences, botany and hunting, as well as architecture, and the influence of all these fields on his reign.
His curiosity and insatiable thirst for knowledge drove him to fund long sea voyages, transform Trianon into a garden full of botanical experiments, commission cutting-edge scientific tools and order the mapping of the kingdom.

Louis XV and the arts of his time

The final section of the exhibition shows how the arts flourished during the reign of the “Well-Beloved”.
Multiple masterpieces of rococo art, liberated from formal rules of symmetry, introduce the public to the foundations of this style, which transformed artistic creation in the 18th century.

For this exhibition, the apartment of Madame de Pompadour, as well as that of Madame du Barry, freshly restored after eighteen months of work, will be opened to the public for guided tours, offering a unique experience at the heart of Louis XV’s private Versailles.

This exhibition benefits from the loan of works from the Museum national d'Histoire naturelle.

in connection with the exhibition

On the occasion of the Louis XV exhibition, a fictional serialised podcast will explore the “Bien-Aimé's” passion for the sciences.
Coming soon here and on all podcast platforms.

When visiting the exhibition, discover the audio trail available on the Palace audioguide and mobile application.

With the patronage of:

With the media partnership of :

The exhibition can be accessed with the “Passport” or “Palace” ticket. 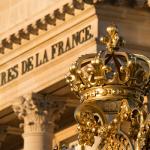 free admission for under 26s