Apollo’s fountain is a central element of the Versailles gardens and is now in major need of restoration. The gilded lead parts of Apollo on his chariot need to regain their lustre. Starting in December 2022, the sculpted group will be dismantled, lifted out by crane and taken to a workshop for substantial restoration.

An architectural masterpiece from the 17th century

Apollo’s fountain lies between the Grand Canal and the Great Lawn, making it a firm part of the Grande Perspective in the gardens of Versailles, as planned by André Le Nôtre. 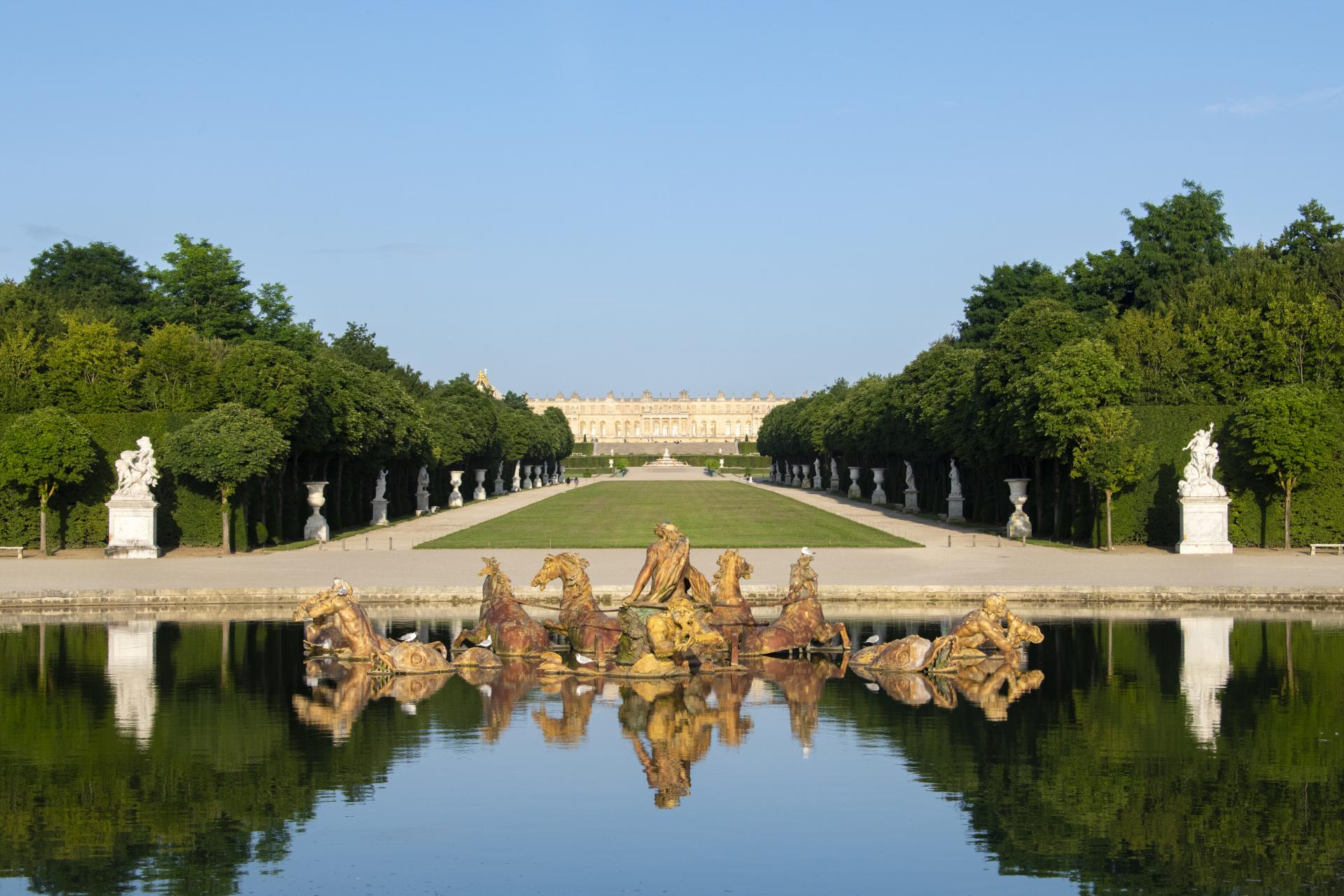 Rising majestically from the centre of the fountain is Apollo’s chariot team – a group of thirteen lead statues symbolising the sun god’s journey. Apollo bursts from the water to light up the world, his chariot harnessed to four spirited steeds, accompanied by a cherub. Surrounding him are four sea creatures and four tritons located at the four cardinal points of the stone base.

This group of metal sculptures was created by Jean-Baptiste Tuby between 1668 and 1671, based on a design by Le Brun. It was made at the Gobelins manufactory and then taken to Versailles in 1670, before being gilded the following year. 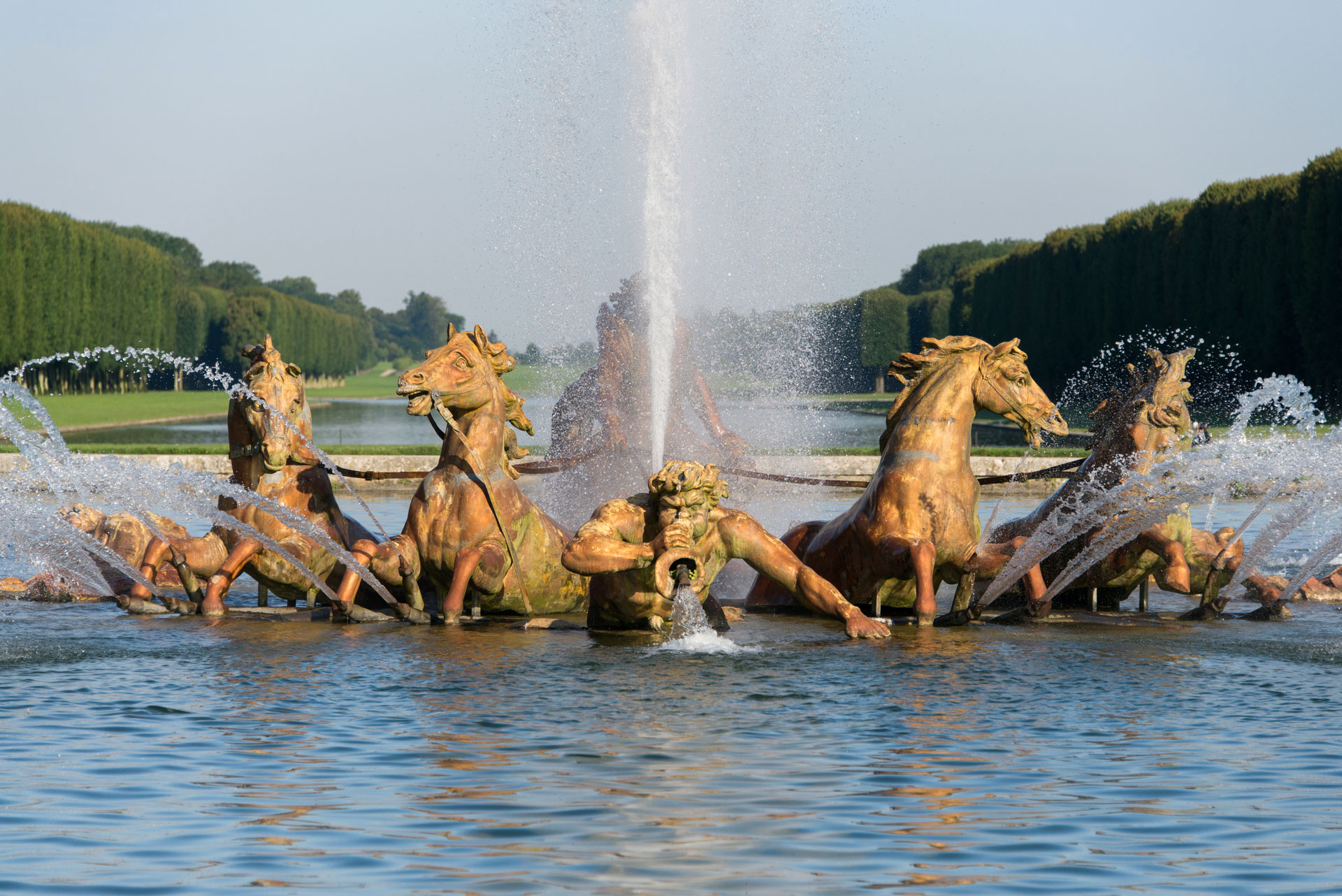 A proclamation of the glory of the Sun King

Apollo, as the god of the arts, the sun and healing, symbolises power, reason and peace. Louis XIV styled himself on the sun god, presenting himself as a peacemaker, patron of the arts, figure of irrefutable reason and therefore worthy of sitting on the throne of France.

The figure of Apollo can be found all over the Palace of Versailles – especially in the form of this fountain – as an allegory of the king, representing the rising of the sun and therefore a celebration of the glory of Louis XIV.

Although the group of lead statues has been restored several times since the 18th century, the last significant restoration was way back in 1955. Under the supervision of architect Marc Saltet, a structural treatment was carried out and the damaged parts of the framework were replaced.

Concern over its current condition

Despite regular maintenance and various repairs carried out here and there, Apollo’s chariot shows significant signs of damage, caused mainly by the water: structural deformities due to corrosion, missing parts of the internal framework, major deterioration of the lead, and significant erosion of the surface coatings and gilding, which has gradually turned orange.

Current state of the sculpted group

Acting to secure the long-term future of Apollo’s fountain

The damage to Apollo’s chariot now needs to be repaired in order to permanently address the issues affecting the lead structure, which dates from the late 17th century. The remaining outer layers need to be preserved, while those parts of the stone base that have deteriorated also need to be fixed. The lead sculptures need to be restored and their deformations corrected.

The aim is to restore the late 17th-century layout of the fountain works and give the sculpted figures of Apollon’s chariot their bronze-like coating back.

LAUNCH OF THE RESTORATION OF aPOLLO'S FOUNTAIN

The first article on the restoration of the Apollo fountain, "Apollo saved from the waters", is available to read (in French) on the Carnets de Versailles blog

The restoration of Apollo’s fountain and its surrounds is possible thanks to the exclusive patronage of CMA CGM Group, a French company and a global reference in transport and logistics.