Louis XV was always fond of Le Trianon. A passionate fan of gardening and botany, he made his first forays into these domains at the Château de Choisy, before turning his attentions to the area east of the Grand Trianon in the late 1740s. Over the years the gardens would continue to grow.

The French Gardens and their various structures were created between 1749 and 1753: the Menagerie (1749), the French Pavilion (1750), the Bird House (1751), and the Cool Room (1753). In the meantime the king was also working on planting a garden of fruit-bearing trees, equipped with greenhouses where he could cultivate exotic species such as pineapple and coffee, as well as a flower garden complete with orangery, flower theatre and countless flowerbeds.

Louis XV subsequently ordered that a new royal residence be built at the heart of this unique domain: the Petit Trianon palace. By the time of the king's death in 1774, the Trianon gardens were among the most beautiful and most richly-stocked botanical gardens in Europe. When Marie-Antoinette became the new mistress of the Petit Trianon, she thoroughly reorganised the grounds to create a vast Anglo-Oriental garden dotted with follies. Nevertheless, the geometric forms of the French Gardens were spared. 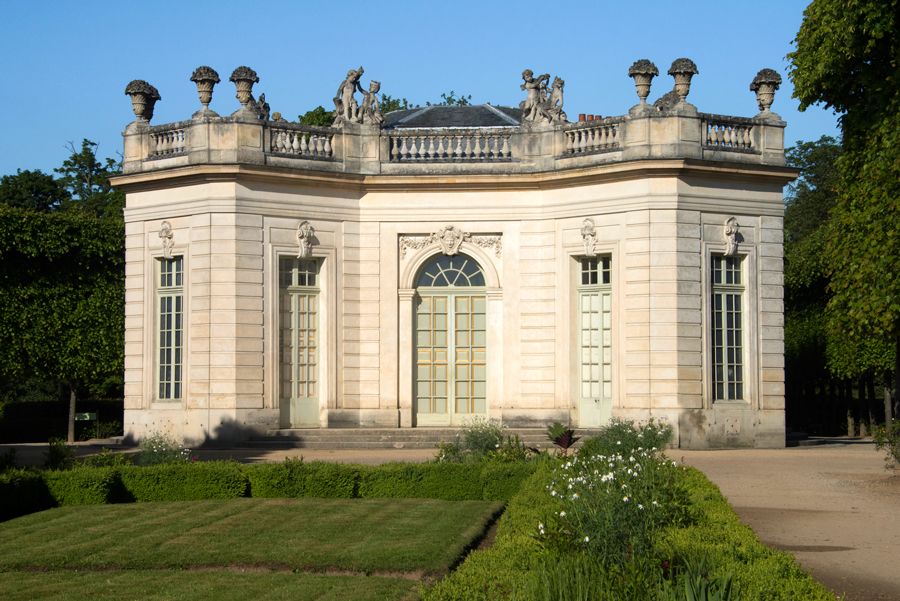 The development of the Trianon gardens under Louis XV and the building of the new menagerie prompted the king to commission Jacques-Ange Gabriel to build a new pleasure pavilion in the middle of the gardens, sited to offer easy access to the flowerbeds. Starting in the spring of 1749, work on the ‘New Menagerie’ pavilion was completed in the autumn of 1750. The royal architect came up with a design based on a vast rotunda supported by four small wings. Topped off with a balustrade that hides the roof, the new pavilion was an instant hit with the king, who liked to host guests here. The Duke of Croÿ was one such lucky visitor: “He [the king] took me to his splendid pavilion in the Trianon gardens, and encouraged me to build something in the same style.” The interior layout is simple: a central salon, an antechamber, a boudoir, a lavatory connected to a small room used to prepare coffee, and a stove room separated from the salon by a fireplace. This fireplace, flanked by Corinthian columns, was sculpted by Jacques Verbeckt. The sculpted details evoke the spirit of this pleasure pavilion: the frieze above the cornice teems with cockerels, turkeys and other birds from the nearby menageries; the four overdoor panels contain allegories of the four natural elements. These sculptures were originally painted, not gilded as they are today. The allegorical scenes echo the sculptures by Jules-Antoine Rousseau which line the roof, with eight groups of children each symbolising a season or an element. Each of the four façades represents a season: summer to the south, winter to the north, spring to the east and autumn to the west.

After the death of Louis XV, Marie-Antoinette used the French Pavilion for her own amusements: in 1785 and 1786 she had tents and wooden cabins set up outside the pavilion to host concerts and balls. 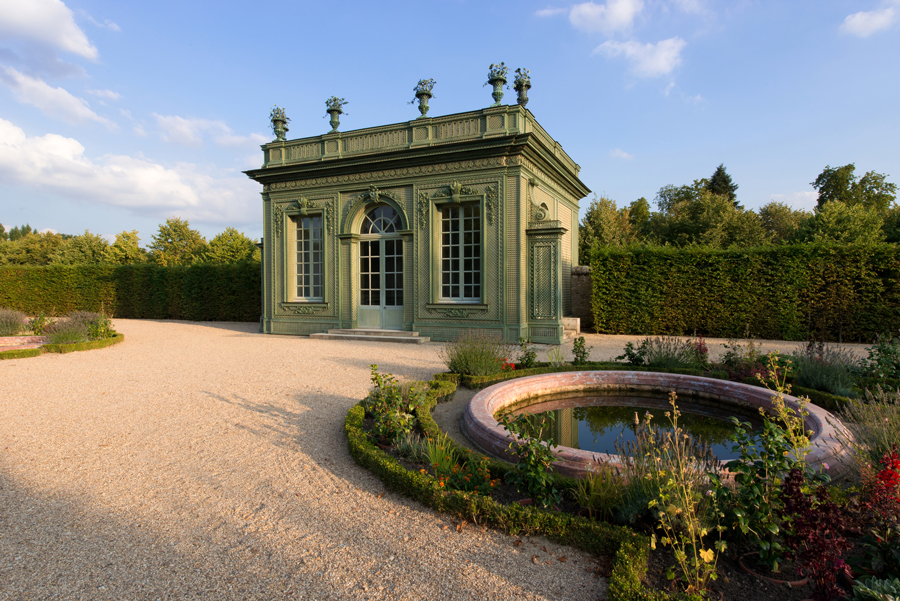 South of the French Pavilion stands the Cool Pavilion, whose trellis decoration was recently restored. This summer dining room was also built for Louis XV and destroyed in the 19th century before being reconstructed in the 1980s.