The decision to have monumental sculpted decoration on the balustrade and the pediment of the Royal Chapel was taken in around 1705. The carefully chosen subject matter of the decoration mixes allegory with great figures of Christianity. The four evangelists rub shoulders with the twelve apostles, the four Fathers of the Latin Church, the four Fathers of the Greek Church and six allegories of Christian virtue.

The restoration of the Royal Chapel

Saint Ambrose is portrayed as an aged man with short hair and a long beard, dressed in bishop’s attire including mitre, soutane, rochet, cope, stole and a cross on a chain. He has an open book in his left hand and a pen in his right, symbolising his doctrinal writings. Born in Trier in around 339, Saint Ambrose came from a family of senatorial nobles. While he was lay governor of the provinces of Emilia and Liguria, he was elected bishop of Milan by popular acclamation in 373. Quickly becoming a fierce defender of the church against imperial power, he also distinguished himself by his contribution to saving the cultural heritage of Antiquity. He died in 397, leaving a significant body of theological work that led him to be recognised as one of the four Fathers of the Latin Church.

After winning the Prix de Rome in 1683, Lepautre, who was a student of Magnier, stayed in that city for 15 years. His works include copies of antiques now in the Louvre as well as several groups of sculpted figures in the Tuileries including Aneas and Anchises (1716) and Paetus and Arria, which had been started by the sculptor Jean Théodon. For the interior of the Royal Chapel of Versailles, he sculpted a group of angels in lead as well as two angels in bronze and the bas-relief of Modesty and Chastity. Lepautre also made an etching of Coysevox’s statue of Louis XIV, erected in Paris in 1689. 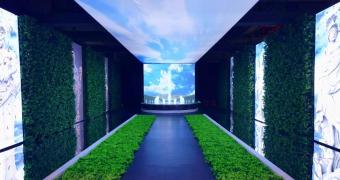 After Singapore in 2019, the next stop on the tour of the “Virtually Versailles” digital exhibition will be Shanghai’s Xitiandi Style Mall. The event will take place from 28 February to 15 June 2021 and will offer an immersive journey into the world of the Palace, its décor, collections and gardens.