The Queen's library is one of the most endearing rooms in the Queen's Private Apartments. The restoration will take place between spring 2017 and spring 2018.

The Queen's library surrounds the Dauphin's Courtyard on the first floor of the central body of the Palace.

The room has remained virtually exactly as it was when it was delivered to Marie-Antoinette by Architect Richard Mique in 1781. Having undergone multiple modifications during the 18th century, it still bears signs of its different states of condition dating from 1772, when Marie-Antoinette was Dauphine. Its small size is complemented by the delicacy and luxury of the decor, with its finely sculpted book cabinets, woodwork and cornices gilded in two shades: green and yellow gold.

The library has not seen any real large-scale renovation work since the 19th century, which is the reason for its current state of disrepair. The decoration is showing signs of dilapidation and surface damage (flaking of the gilding and paintwork) as well as more serious damage such as loosening and cracks in certain panels and in the ceiling, and a few missing sculptural elements. The extension was restored in the 1980s, but the finish is now aging.

The restoration work will bring back all the former beauty to this part of the Queen's Private Apartments, restore the historical and aesthetic coherence of the series of rooms reserved for the Queen's use and allow better presentation of the collections (books and lacquer works). The spaces will be restored according to their last known condition during the Ancien Régime.

The restoration of the Queen's library is realised with the support of The Friends of the Palace of Versailles. 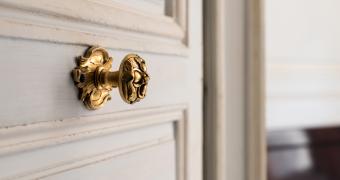 Restoration of the Queen's Private Chambers