Beyond the gardens of Versailles lie the Trianon Palaces and the Estate of Marie Antoinette. Take the map of the Estate with you and discover this bucolic place, created to escape the constraints of the Court and whose peaceful atmosphere still contrasts with the main palace and its French garden.

Duration of visit
Allow for a full afternoon. The Trianon Palaces and the Estate of Marie Antoinette are open from 12 noon to 5.30 or 6.30 p.m..
Each of the three spaces (Grand Trianon, Petit Trianon and the Queen’s Hamlet) can be visited independently of each other).
View detailed times

Access
From the Palace of Versailles, it is about half an hour’s walk or 20 minutes by the mini-train or by electric vehicle.
Locate the Trianon Palaces and the Estate of Marie-Antoinette

Trianon over the Centuries

Before starting your visit, make sure you get a map of the Trianon Palaces and Marie Antoinette’s Estate; it can be downloaded or is available on site. Note that the toilets are located outside the Grand Trianon; there are others in the Petit Trianon and in the Queen’s Hamlet.

Starting with the Grand Trianon you can discover the estate chronologically: Louis XIV's Grand Trianon , built by Jules Hardouin-Mansart in 1687;  the  Petit Trianon of Louis XV for Madame de Pompadour, built by Gabriel in the 1760s; Louis XVI  then gave the Petit Trianon estate to Marie Antoinette in 1774, and it was she who created the English garden and commissioned the Queen's Hamlet in 1783.

This set of buildings constituted Louis XIV’s second residence and offered him a life less constrained by the protocols of the Court. Constructed by Jules Hardouin-Mansart in 1687, this “little palace of pink marble and porphyry with delightful gardens” was inspired by Italian architecture. The furniture displayed in the rooms dates from the First Empire and testifies to Napoleon's many periods of residence at the Grand Trianon, with his wife the Empress Marie-Louise. 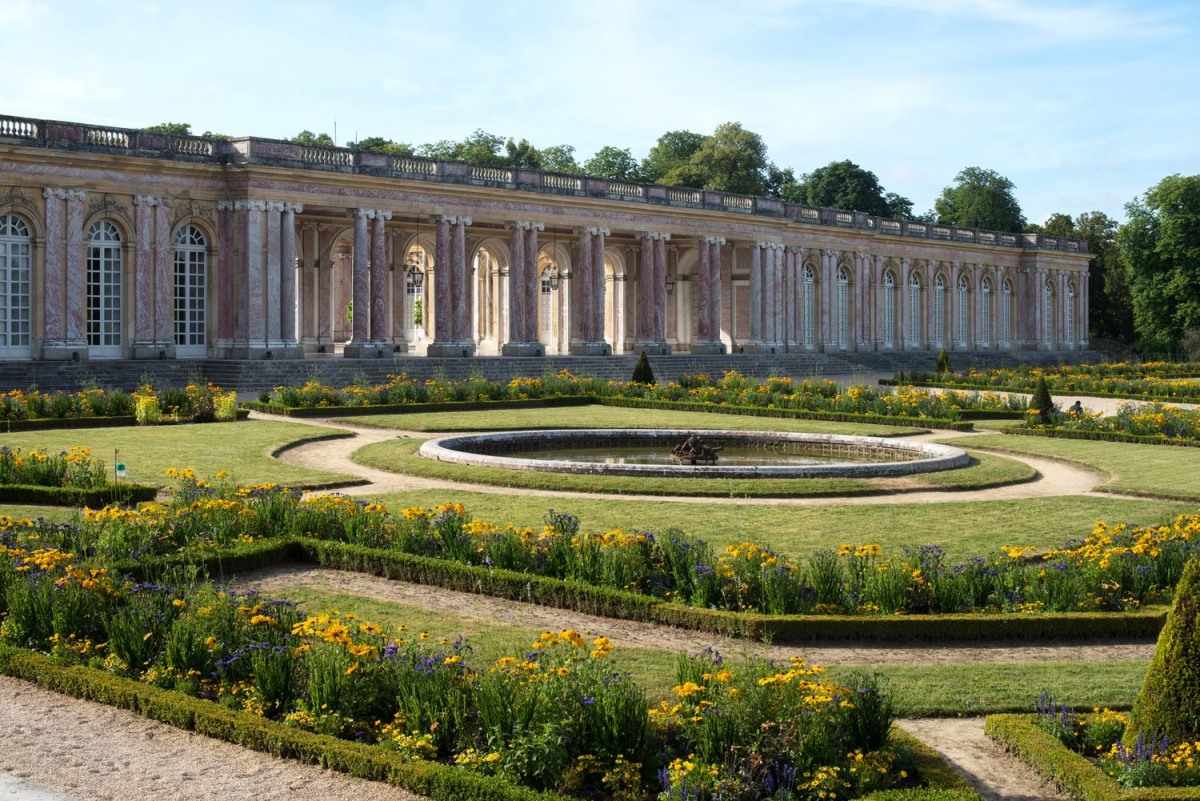 Your visit begins with the apartments of the Empress, comprising among other rooms the Hall of Mirrors and the Empress’s Chambers. These two rooms have retained their seventeenth-century decoration but the layout dates from the First Empire. For example, the room was divided into two, creating a smaller space and a drawing-room for the personal use of Marie Louise. The only piece of furniture that did not belong to her is the bed: it is the one used by Napoleon at the Tuileries, and in which King Louis XVIII died in 1824.

Between the apartments of the Empress and those of the Emperor, take a little time to appreciate the Peristyle, the long gallery open on each of its sides to blend the palace into the surrounding nature. For the record, Napoleon had it glazed to facilitate communication between the two apartments. The windows were removed in 1910.

Now enter the apartments of the Emperor. As you wander through the palace, we invite you to linger in the music room where, over the doors, you will notice the shutters of the galleries where the musicians who played during meals were seated. Then stop in the Malachite Room, so named because it houses objects made of malachite given by Czar Alexander I to Napoleon.

Your visit ends in the Cotelle Gallery decorated with 24 paintings, most of which were painted by Jean Cotelle, depicting the groves of Versailles and Trianon at the time when they were commissioned, in 1687. Two marble coolers were placed in the niches in the nineteenth century. It was in this gallery that the treaty of peace was signed with Hungary on 4 June 1920, bringing the First World War to an end. In 2016, the state restored the apartments of General de Gaulle located in the North Wing called “Trianon-sous-Bois”, which at the time provided some living and working space for the President of the Republic.

Take some time to enjoy the outdoor setting of this small palace. Renowned for its French Gardens, the Grand Trianon is surrounded by tens of thousands of perennial and tuberous plants in pots, that can be changed every day (this is no longer done nowadays, but it would still be possible to do so), and thus create a flowery and fragrant spectacle.

Continue with a visit of the Petit Trianon, which you can reach from outside the Trianon estate or via the gardens by crossing the Chemin Creux Bridge.

The Petit Trianon, nestling between a French garden and an English garden

The Petit Trianon and its park are inextricably linked to the memory of Queen Marie-Antoinette. In her Trianon Estate, given to her by Louis XVI in 1774, she found a haven of intimacy that enabled her to escape court etiquette.

If you arrive via the gardens of the Grand Trianon, visit the French garden before going on to the Petit Trianon itself. Otherwise, if you arrive from outside the Trianon estate, the entrance is via the Swiss House, which acquired its name from the porter who held the keys of the Petit Trianon and also the power to allow visits in the absence of the queen. After passing through the security check, we suggest that during your visit of the ground floor, you take a careful look at the Réchauffoir where dishes were warmed before being served at the royal table, given that the kitchens were located in the servants’ quarters close to the palace, to avoid any disturbance. 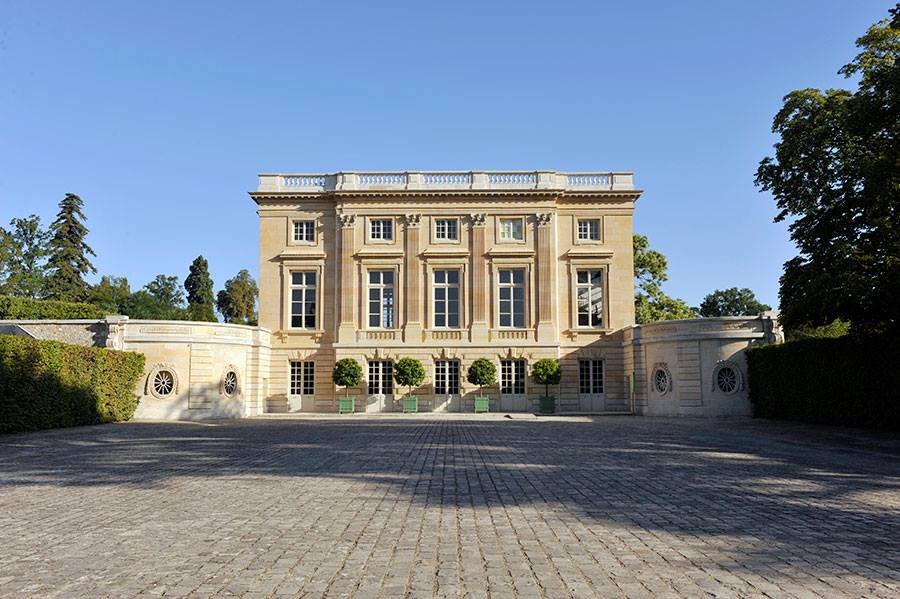 Upstairs, you can see the bedroom and the Cabinet of Moving Mirrors. The former study of Louis XV, it was converted by Marie Antoinette, who also commissioned a mechanical engineer, Jean-Tobie Mercklein, to make movable mirrors which would rise from the floor to close off the two windows and so create a boudoir.

If you have not already seen this, your visit continues in the French gardens of the Petit Trianon; you can find your way around with the numbers on the map of the Trianon Palaces and Marie Antoinette’s Estate. These gardens feature the French Pavilion, the Cool Room and the Queen’s Theatre. To get there, we invite you to take the second walk on your left after the tree as the slope is milder. The French Pavilion is so named because it stands at the centre of the Petit Trianon’s French gardens. Visitors to the garden would go there to rest, and listen to music. Next door, you will find a smaller pavilion surrounded by a green trellis, called the Cool Room. This place served as a dining room intended in which to consume the products of the dairy and vegetable gardens. The Queen's Theatre is not wheelchair accessible.

To reach the Queen's Hamlet, you must cross the Petit Trianon's English Gardens following the route marked in pink. While on your way, wander over to the Temple of Love. The marble edifice houses a copy of Cupid Cutting his Bow from the Club of Hercules by Bouchardon.

From the English garden, you can move on to the Queen's Hamlet, whose the restoration work was finished in 2018.

The hamlet was built in the spirit of a real Norman village, comprising a set of eleven houses spread around the Great Lake, and including the Queen’s House and the Preparation Dairy. Each house has its own small garden, planted with various vegetables, flowers, fruit trees, etc. The whole area including the farm became a real agricultural concern managed by a farmer. The products supplied the kitchens of the Palace. The Malborough Tower overlooking the lake was used for outings in boats or fishing trips. 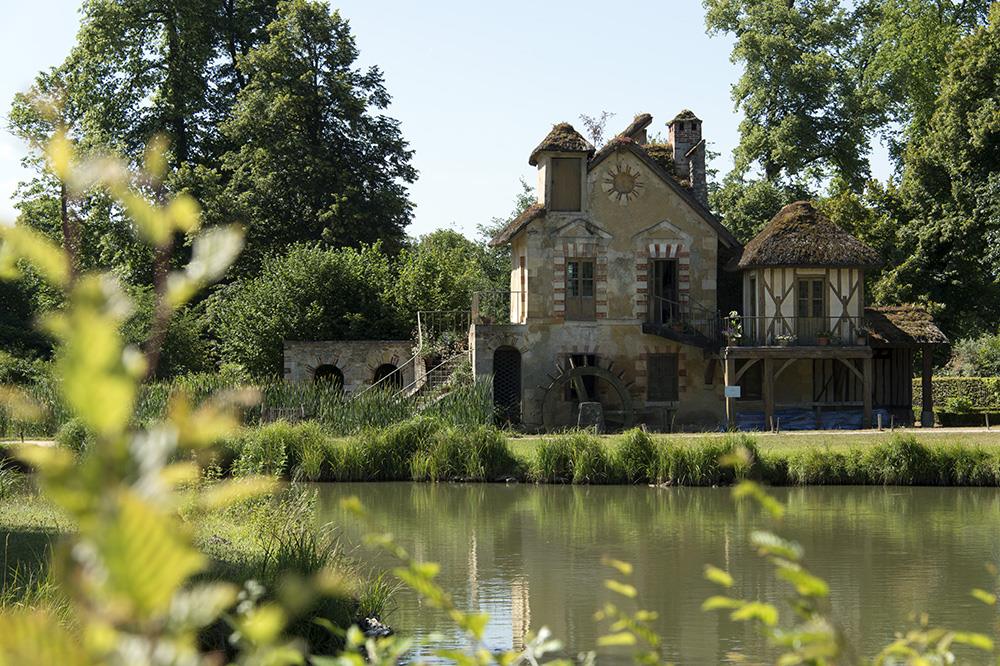 After suffering under the Revolution, the idea was mooted under Napoleon to destroy it but fortunately it was decided instead to restore the whole. The houses were then redecorated and refurnished for the use of the Empress Marie-Louise, second wife of Napoleon. Today, the farm still boasts a varied livestock.

Take a guided visit to learn more and see some rooms that are closed to the public on self-guided tours!