When it comes to restoring metal ornaments, there are generally two major problems: the state of the outermost layer, which has often been damaged by the weather, and the condition of the internal structural frame. The compatibility of the materials used is also often an issue.

During the restoration of the Royal Chapel, small problems with the outer layer, or skin, were swiftly resolved with gentle micro-abrasion. Repairing internal frameworks proved more complex, however, as they came in a variety of configurations. Itinerary of an internal restoration effort.

watch over the Chapel: two groups of three at each end of the roof, six pairs of angels on both sides of the dormers and winged heads to the right of the valleys

Weight of each of the angels in the sculpted groups

Assigned to the restoration of each sculpted group, which will take around a year 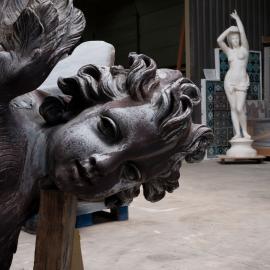 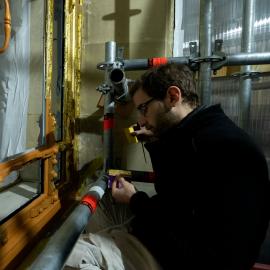 The wealth of lead ornaments adorning the exterior of the Royal Chapel is one of its key features. They emphasise the main lines of the roof, with two groups of sculpted angels forming a hem for its peak. This was even more obvious in the past when, high above the ridge, the roof lantern loomed, but this was quickly destroyed, in 1764. But the majority of the lead ornaments remain and, once gilded, they will regain the splendour and impact they had when they were first created.

Even more noteworthy are the creators of the sculpted groups that adorn both ends of the roof, east and west. Renowned artists Guillaume Coustou (1677-1746) and Pierre Lepautre (1659-1744) created true masterpieces, whose magnificence is set to be restored as part of this work. The angels were designed to tower over the whole Chapel and be just visible from the ground. Once taken down and transported to the Périgueux workshops of SOCRA, which has been tasked with restoring them, these human-size statues revealed their delicate arms, plump thighs and cherubic faces framed with curls.

Some angels have suffered more than others

A diagnostic exercise revealed their outermost layer, or skin, to be in satisfactory condition overall. However, it also highlighted the considerable disparity between the two groups. The one on the eastern side had withstood the ravages of time much better than the west-side group, which was dangerously close to collapse. This seemed logical, as this group was more exposed to the winds that blow freely around the Palace. The main reason, however, was to be found elsewhere – and it was to discuss this that Frédéric Didier travelled to SOCRA one day in April 2019.

Like a detective, the Palace of Versailles’ chief architect for historic monuments circled the statues, looking for the slightest clues. Keeping an eye out for imperfections, examining the interior of the opened-up bodies, he traced his finger along the previous repairs to the metal evident from the changes in colour. In fact, both groups had undergone several restoration efforts, the details of which were not always recorded. Even the way in which they were attached to the roof was not straightforward: “It took us a while to realise that these angels were held in place merely by gravity, posed on enormous steel rods,” explains the director of SOCRA, Richard Boyer. The sculptures owed their stability to careful distribution of masses, connected to each other by copious drapery in a system known as “self-supporting”. In other words, it is the internal framework, skilfully arranged inside the bodies, that serves as the support structure.

Using an endoscope, SOCRA examined the frameworks of each of the sculpted groups. A report was produced, containing descriptions of their nature and configuration, and illustrated with numerous photographs and 3D images. The group from the east side of the roof was found to feature very high-quality iron rods, sealed directly to the skin. From the legs to the tips of the wings, they follow the curves of the bodies exactly, through all their twists and turns.

The west-side group’s structure is less sophisticated and based on “crinolines”: like the petticoats designed to hold out a woman’s dress, a frame of metal has been slid into the middle of the sculptures and features two sets of hoops – one at the level of the pelvis and the other at the shoulders. These have been replaced in certain parts by reinforcements made from resin-covered stainless steel, which, on the evidence, are more recent. Most likely, they date from the restoration work carried out in the 1980s. Paradoxically, they were less effective than what they replaced.

The east-side group supports, on the contrary, have not changed. They are made from pure iron, which is more pliable than stainless steel, and, interestingly, they have been coated with lead in successive stages. “It’s a genius idea,” Richard Boyer points out, “as this coating protects the iron, which is adversely affected by condensation, while still being compatible with the angels’ skin.” The idea probably came about during the restoration work in the 19th century led by Dufour (1819) or Questel (1873), as the original frameworks had practically disappeared.

Prevailing ideas at the time explain the excellent condition of this sculpted group and the fact that it will only require minimal intervention. They also largely inspired those huddling around the west-side group trying to decide on a restoration method that would be both reliable and respectful of the past. Which metal to choose? For which section? How can these iron rods be inserted into the interior of the angels? Through the head, by scalping it, or via the back, by making openings, as had been done previously? The cross and the palm tree that complete these groups were also evaluated. As the comments flew back and forth, Alexandre, one of the metalworkers at SOCRA, would either nod his approval or make a face. Fifteen years’ experience of working closely with the materials is indispensable when trying to imagine how exactly previous repairs were made and then decide on the next round.

As the discussion went on, it became clear that whatever method was chosen, it would have to be applied to the east-side group first, before restoring the west-side group, after its last remaining frameworks had been removed. “It was the angels themselves who, through the damage they had incurred, told us the approach to take,” Frédéric Didier concludes, rather emotionally. “These winged, youthful-looking, vibrant angels effectively spoke to us.”

The removal of groups of sculpted angels. 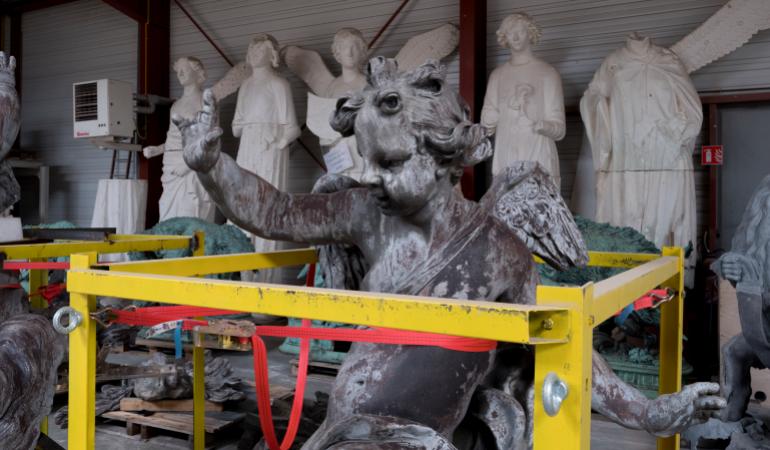 “Removing groups of angels from the heights of the Chapel required highly skilled personnel. Having determined how the groups had been fixed to the roof, we were able to detach them by following the weld joints, particularly with regard to the drapery. To ensure we remembered exactly how they had been positioned, we placed each of them into a type of cage, with the help of chocks, following the exact position in which we had found them on the roof of the Chapel. In total, it took two months to complete this tricky removal operation.”