The Gallery of Great Battles is the most important of the historic Galleries created by Louis-Philippe in the Palace of Versailles. It covers almost the entire first floor of the South Wing of the Palace and depicts nearly 15 centuries of French military successes, from Clovis to Napoleon, through 30 or so paintings.

The Gallery of Great Battles is the largest room in the Palace (120 metres long and 13 metres wide). It covers almost the entire first floor of the South Wing. It was designed in 1833 and construction started the same year. It was solemnly inaugurated on 10 June 1837, constituting the highlight of the visit of the Museum of the History of France. 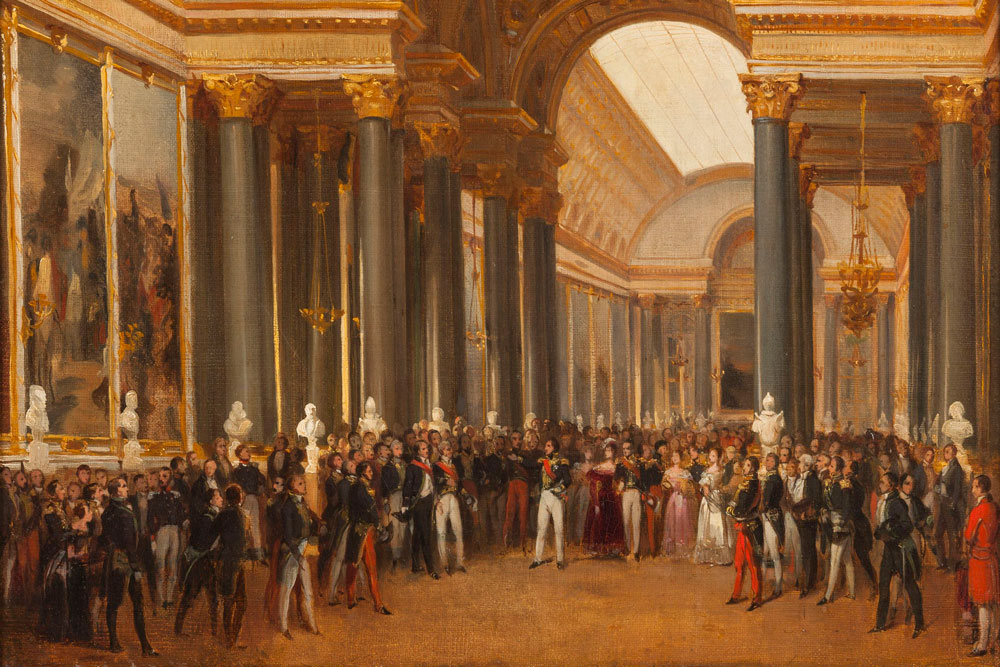 Louis-Philippe displayed 33 paintings here depicting the greatest battles that had influenced the history of France, from the victory in Tolbiac by Clovis to the victory in Wagram by Napoleon 1809. All the dynasties from the history of France are evoked, including the Merovingians, Carolingians, Capetians, Valois and Bourbons. Louis-Philippe skillfully incorporated depictions of the victories by the Revolution and the Empire. His message was simple: France had built itself over the course of battles against enemies from both abroad and within; the country is henceforth glorious, at peace and ready to enter a new era built on peace and prosperity.

All the other works were created specially for the Gallery between 1834 and 1845 by great historical painters of the time including Alaux, Bouchot, Couder, Delacroix, Devéria, Féron, Fragonard son, Franque, Heim, Larivière, Mauzaisse, Picot, the Scheffer brothers, Schnetz, Schopin, Steuben and Vernet. The gallery’s architecture, designed by Frédéric Nepveu and almost certainly with advice from Pierre-Léonard Fontaine, evokes the latter’s projects for the Grande Galerie in the Louvre during the Consulat and the Empire. It was a solemn space punctuated with avant-corps of columns, lit up by glass ceilings in the vault and finely decorated with marble and painted and gilded stuccos. The Gallery was also designed as a Pantheon to national glory, with a series of 80 busts of officers killed in combat, as well as tables in bronze bearing the names of princes, constables, Maréchals and admirals also killed or wounded for France.

Since its opening the gallery has remained intact and untouched, with all the works commissioned by the Citizen-King for its decoration. Today it is still one of the most impressive examples of Louis Philippe’s project for Versailles and one of the finest examples of major museum projects of the 19th century.