Built at the end of 19th century, the Congress Chamber is still used today by the members of the National Assembly and the Senate when they meet in a "Congress" to adopt constitutional amendments or to hear an address by the President of the Republic.

This room is closed to visitors, but can sometimes be visited on European Heritage Days.

After the defeat at Sedan which led to the fall of Napoleon III's Second Empire, a National Assembly was elected in 1871 and met for the first time in Bordeaux. Made up of a majority of monarchists, it wanted to move to Paris, but was prevented from doing so by unrest in the capital, which culminated in the "Bloody Week" in May 1871. The constitutional laws of 1875 finally established the Third Republic. The new laws provided for a return to a two-chamber system, with a Senate and a Chamber of Deputies. Hesitating between Orléans and Fontainebleau, the Assembly finally chose Versailles  and moved into the Royal Opera House, which underwent some conversions for the circumstances.

Beginnings of the Third Republic

Four years later, the constitutional laws of 1875 finally established the Third Republic. The new laws provided for a return to a two-chamber system, with a Senate and a Chamber of Deputies. The former chose to sit in the Royal Opera House. To accommodate the latter, the architect of the Parliament, Edmond de Joly, built a new hemicycle in the heart of the South Wing at the end of 1875. It was inaugurated at the same time as the solemn opening of the Chambers on 8 March 1876. The Deputies held their parliamentary sessions here until they returned to the Palais Bourbon in Paris in 1879. The huge room had the capacity to accommodate the members of both chambers for "national assemblies", in particular for the purpose of electing the president of the Republic.

The constitution of the Fifth Republic also provides for sessions of the two chambers (Senate and National assembly) to adopt constitutional amendments. Since the session of 2008, it has also been used when the President of the Republic addresses both assemblies.


The large door opening onto Rue de l’Indépendance Américaine is still used today by the public and journalists attending Congress meetings, while the deputies and senators enter via the main Palace courtyard and the Princes’ Courtyard. The vestibule is adorned with 5 statues belonging to the historic collections of the Palace and representing the philosopher René Descartes, the poet François de Malherbe, the moralist Michel de Montaigne, the political thinker Montesquieu and the painter Nicolas Poussin. 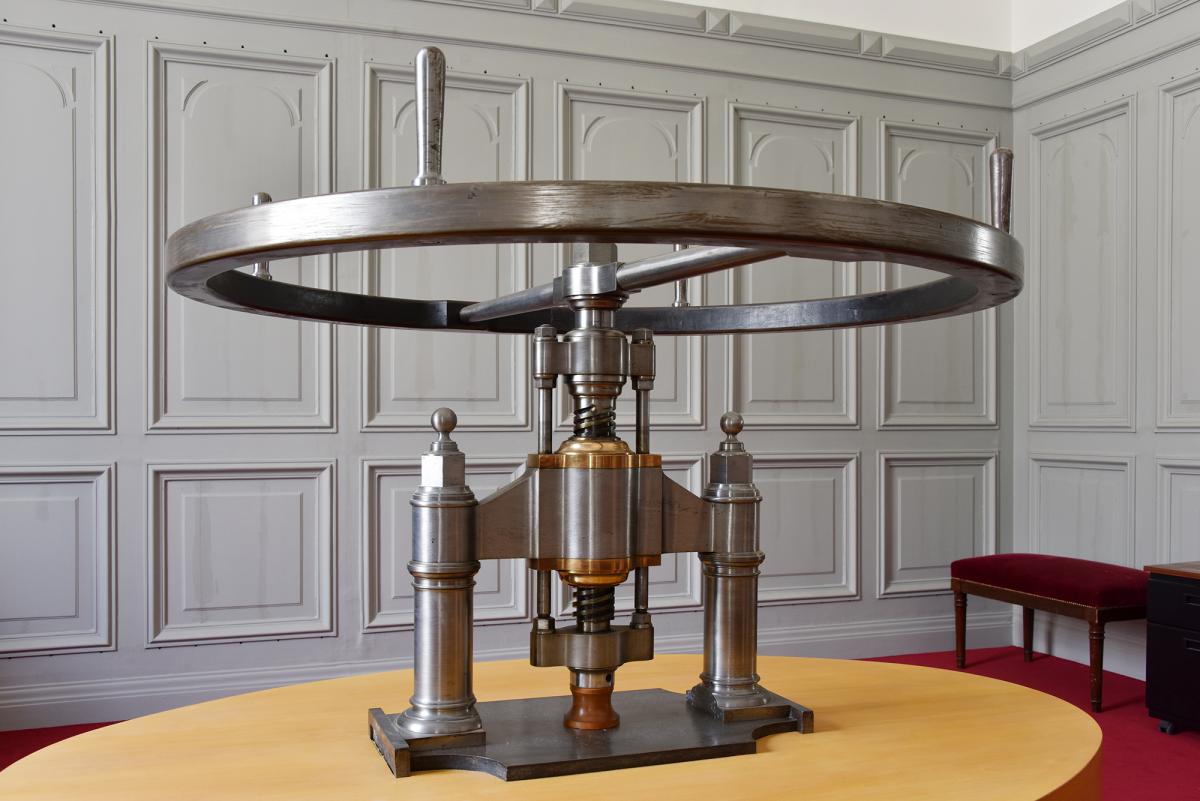 This room was once used as a visiting room for members of the public wishing to meet the deputies. It owes its current name to the seal used to authenticate official acts produced by the French National Assembly or the two assemblies united in congress. The seal used to be located in one of the Empire Rooms near the Marengo Room. The device itself dates from 1875 and was the work of the engineer Guillaume, who designed it as a screw press. It weighs 150 kg.