Louis XV's daughters' Apartments are symmetrical with the Dauphin’s and the Dauphine’s apartments. They were also turned into museum rooms by Louis-Philippe and were only recently restored to their original condition as princely apartments. Mesdames of France, as the six daughters of Louis XV were known, lived here from 1752. Only two of them, Adélaïde and Victoire, remained until the Revolution, since neither princess married and both lived to an old age.

These apartments have a rather complex history due to the numerous changes in their use and layout over time. Louis XIV originally built a splendid apartment of Bath Chambers here, in the part which currently contains Madame Victoire’s Apartments. They were composed of five rooms, including a large vestibule with columns (now divided into three smaller rooms: Madame Adélaïde’s private chamber, the library, and Madame Victoire’s Private Chamber), the Diana Room or Ionic Room (now Madame Victoire’s Chamber), the Octogon Room (now Madame Victoire’s Great Chamber), a bathroom (Second Antechamber), and a second bathroom (First Antechamber). The latter room originally contained a large bath made of Rouge de Rance marble, which is currently in the Orangery.

Louis XV's daughters' Apartments have undergone lengthy renovation and refurbishment work, which began in the 1980s and was completed in 2013. They can be visited during unaccompanied visits. The audio guide is included in the entrance fee and in the mobile app "Palace of Versailles" available on the App Store and Google Play.

This room used to be Louis XIV’s bathroom. It then served as a private chamber for the Count of Toulouse from 1692 to 1724, for the Countess of Toulouse from 1724 to 1750, and lastly for Madame Adélaïde from 1752 to 1753. Madame Sophie used it as her chamber from 1755 until 1767, when it became her first antechamber, and in 1769 it became the first antechamber for Madame Victoire. 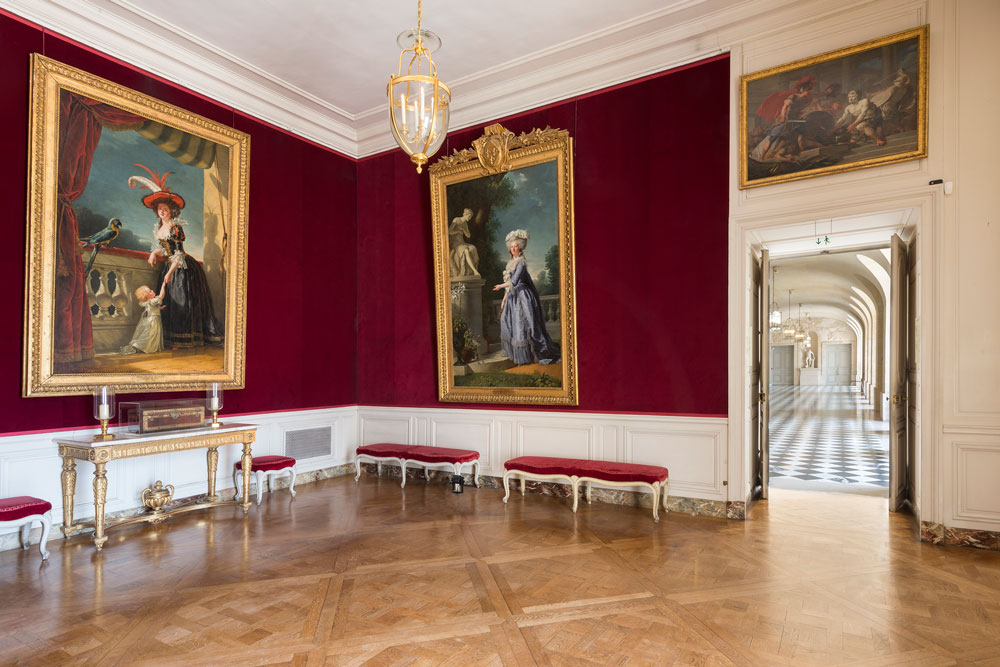 This room was once a bathroom whose floor and walls were covered with marble. At one end there was originally a day bed in an alcove framed by marble columns. The shutters on the windows, attractively decorated with dolphins and icicles, date from this period.

The room later became a chamber for the Count of Toulouse, then the Countess of Toulouse, Madame Adélaïde and lastly Madame Victoire when she shared these apartments with her sisters Sophie and Louise. In 1767 the alcove was removed and the room was turned into a second antechamber.

The woodwork was most likely made for Madame Victoire. The paintings over the doors depict La Fontaine’s Fables and were painted by Oudry for the Dauphin. The commode by Riesener was originally in the Countess of Artois’s Nobles’ Room in the South Wing. The remaining furnishings include a Savonnerie screen in the style of Belin de Fontenay and an “au Chinois” cartel clock in vernis Martin. 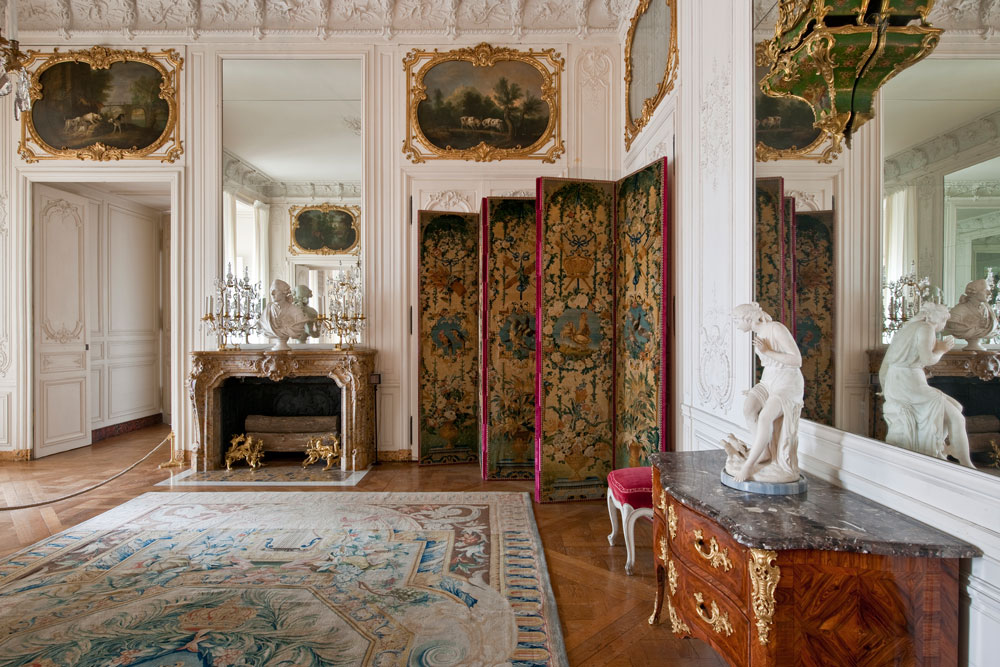 This chamber was originally the Octagon Room in Louis XIV’s Bath Chambers, which were one of the Sun King’s most exceptional creations and were even more lavishly decorated with marble, sculptures and paintings than the State Apartments. In 1763 the Mesdames had the outdated decor replaced, and the cornice, woodwork in the corners and the attractive fireplace all date from this modification. The Blanchet harpsichord is a reference to Madame Victoire, who played this instrument well, and to the fact that Mozart dedicated his first six sonatas for the harpsichord to her. 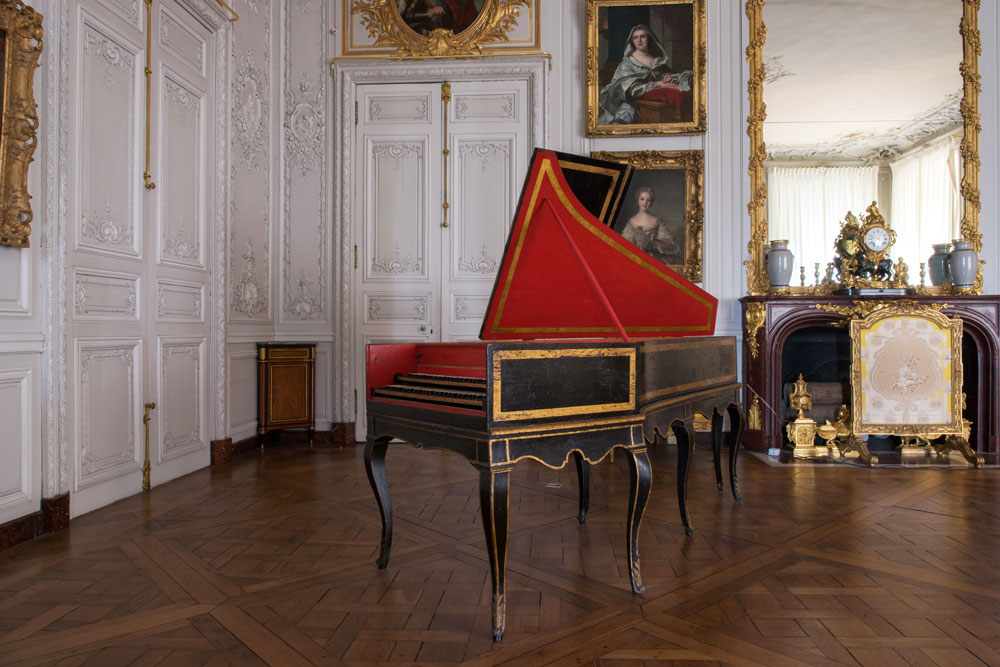 The fine woodwork was made by Antoine Rousseau and the variegated taffeta hangings in the alcove are reminiscent of Madame Victoire’s “summer furnishings”. The two corner cupboards were delivered by Péridiez in 1769 but were later sold off during the Revolution. They were subsequently taken to Russia, then England, from where they were bought back in 1982. 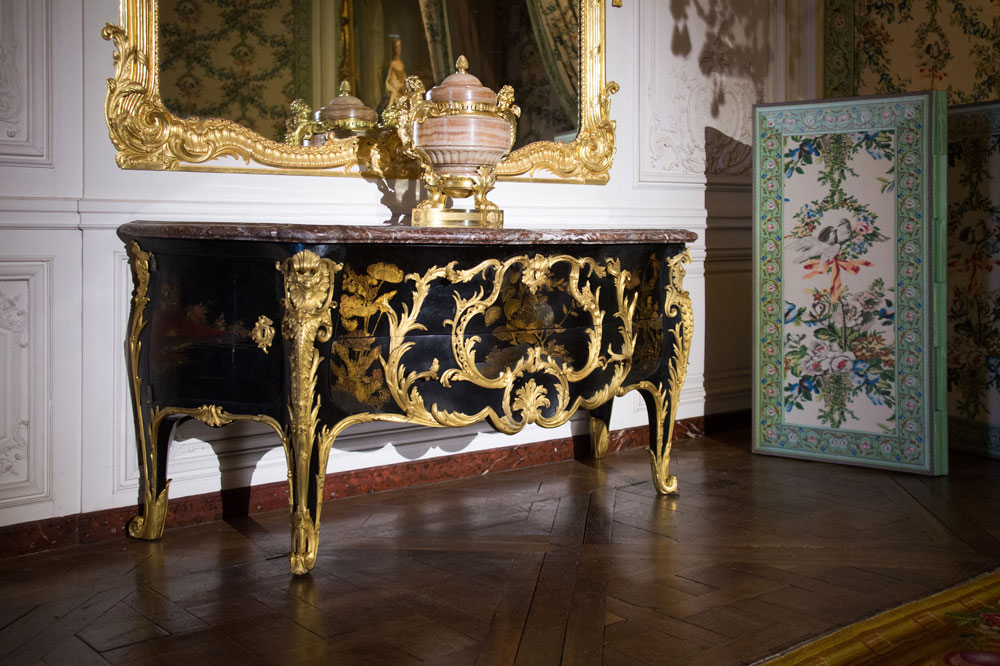 This small elegant room and the two following ones originally composed one single room, constituting the Doric Vestibule in the Bath Chambers. The vestibule was divided into three sections by two lines of Rouge de Rance marble columns, which still stand today behind the wood panelling. In 1724 partitions were added to build two separate antechambers for the Count and Countess of Toulouse, and the princess’s antechamber was in turn divided into two in 1767 to create this small room and the library next to it.

Antoine Rousseau was responsible for the very fine woodwork, part of which has been restored to its original position, as well as the fireplace in Sarrancolin marble.

The commode was delivered in 1768 by Foullet for Madame Victoire’s Apartments, and on top of it sits an alabaster bowl which also belonged to the princess. The writing table  was made by Levasseur for the Mesdames for the palace of Bellevue. 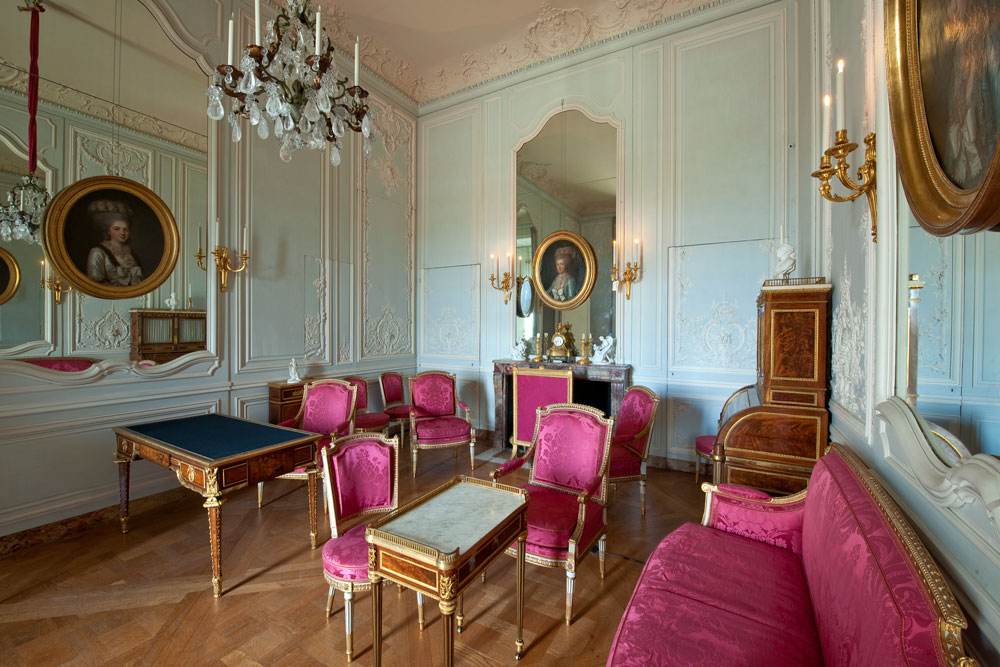 This room was originally part of the following apartment before it was adjoined to the present one. It has a mezzanine which contains an additional library.

The cupboards contain books bearing the Mesdames’ coat of arms on their cover, a small chest with a collection of geography maps that belonged to Madame Élisabeth, the Mesdames’ niece, items from a coffee set made of Sèvres porcelain which was decorated in the Chinese style and delivered in 1775 for Madame Adélaïde, and a silver-gilt table bell bearing the cypher and coat of arms of Madame Victoire.

The small slope desk was delivered for either Madame Sophie or Madame Louise in 1760 when they returned to Versailles from the Abbey of Fontevraud, and the chairs were part of the furniture belonging to Madame Victoire in the palace of Bellevue. 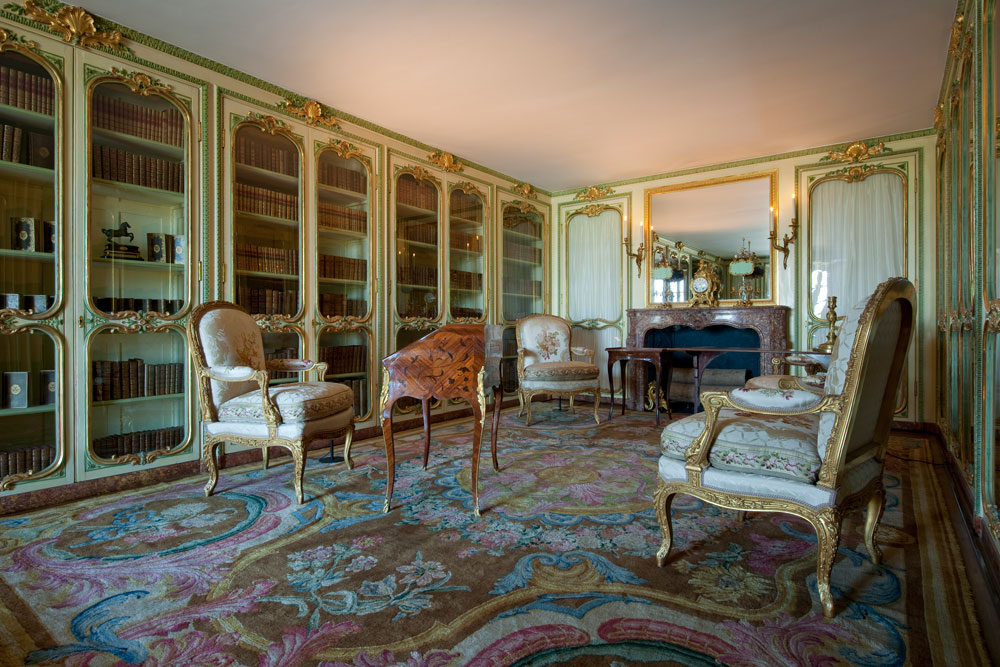 Between 1724 and 1737 this room was a bedchamber. It first belonged to the Count of Toulouse, Louis XIV and Mme de Montespan’s legitimated son, and then to his own son, the Duke of Penthièvre from 1737 to 1744, and finally to the Duchess of Penthièvre from 1744 to 1750. It then became the Marquise de Pompadour’s bedchamber in which she died on 15 April 1764. It became Maria-Josepha of Saxony’s bedchamber in 1766, but the Dauphine died on 13 March 1767 before being able to properly move in. Her body was nevertheless displayed on a ceremonial bed here after her death. Between 1767 and 1769 the room was Madame Victoire’s chamber and finally became Madame Adélaïde’s chamber from 1769 to 1789.

The woodwork was most likely made for the Dauphine in 1766, with the exception of the borders in the decoration over the doors which were no doubt “reused” from the decor in Mme de Pompadour’s chamber. They frame four paintings by Natoire depicting allegories of Painting, Sculpture, Architecture and Music.

The hangings in the alcove evoke Madame Adélaïde’s “summer furnishings”. The alcove also contains portraits of Louis XV by Carle Van Loo and of Madame Sophie and Madame Louise by Drouais. On the fireplace rests a fine bust of the Dauphin, Madame Adélaïde’s brother, by Augustin Pajou. The attractive chairs were made around 1770 by Nicolas-Quinibert Foliot and came from the old Royal Furniture Storehouse. 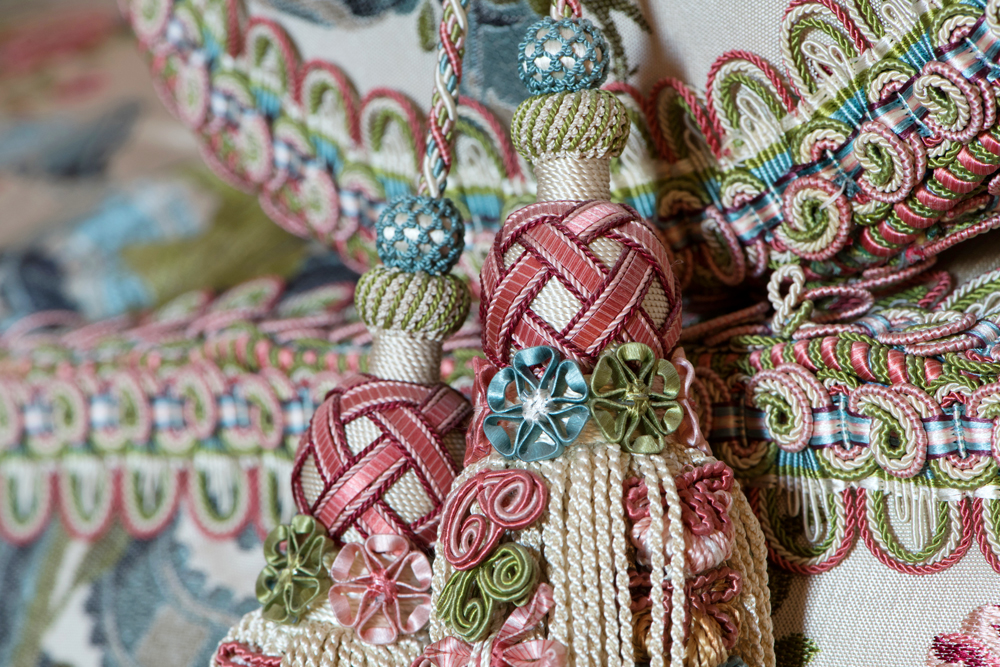 At the time this small chamber was known as Madame de Pompadour’s red lacquer chamber. When Louis XV’s mistress became his “friend” in 1750, she lived in these rooms, which later became Madame Adélaïde’s Apartments, and died here in 1764.

Madame Adélaïde’s Private Chamber is currently furnished with extremely fine furniture and souvenirs of the palace of Bellevue, the Mesdames’ favourite residence. It remains evocative of this princess who, according to the Countess of Boigne, “had a desperate need for the latest luxuries”. 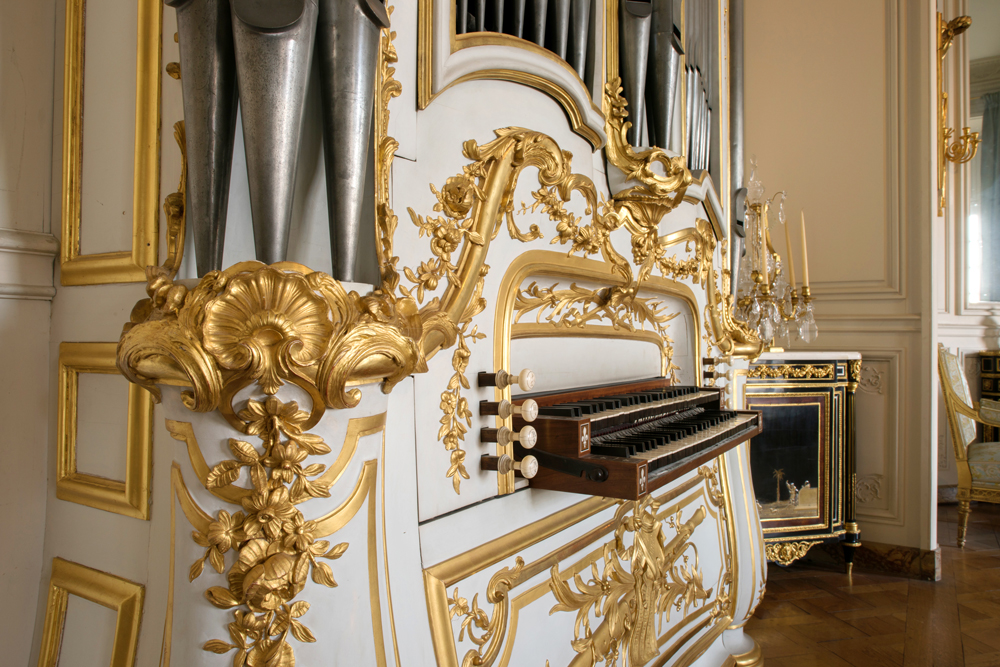 The Prévôté de l’Hôtel guards, who were the Palace police, were known as the “hoquetons” in reference to their tunics. In 1672 this room, where they were generally stationed, was decorated with trompe-l’oeil effects depicting weapons and statues in fake alcoves. Madame de Pompadour divided the room to create two antechambers which were later used by the Dauphine, Madame Victoire and lastly Madame Adélaïde. These, however, have not been restored. Two statues have been placed in the alcoves, including a Moor bust in polychrome marble from the collections of the Borghese princes, and a very fine figure of a woman wearing draped clothing. The body of this statue dates from Antiquity, while the bronze head and arms were made by Algardi, a famous Italian sculptor from Rome in the 17th century. 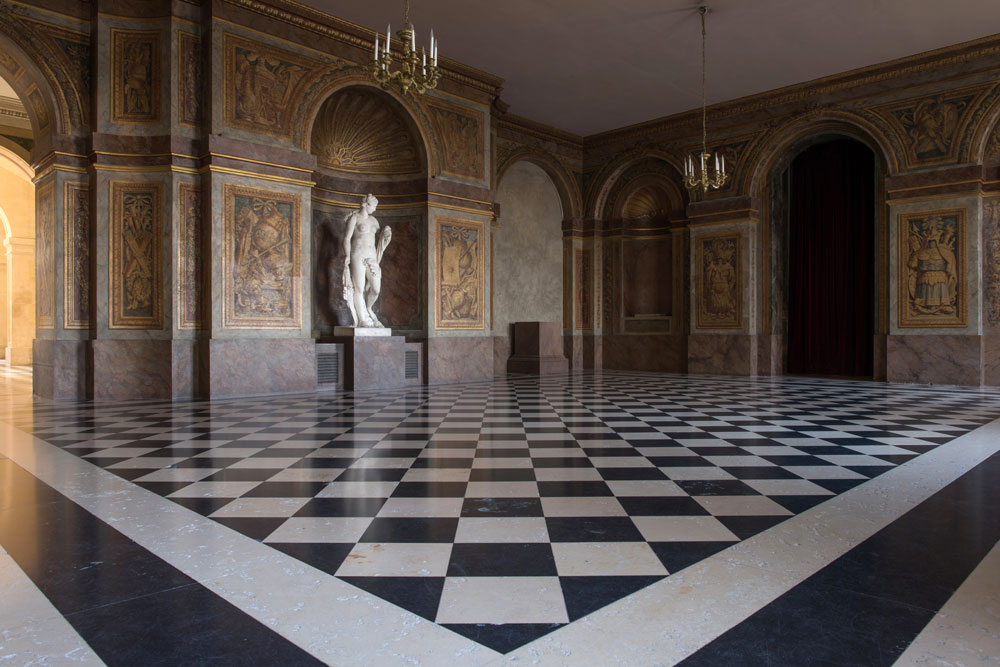 Details of the rooms